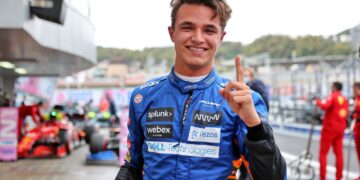 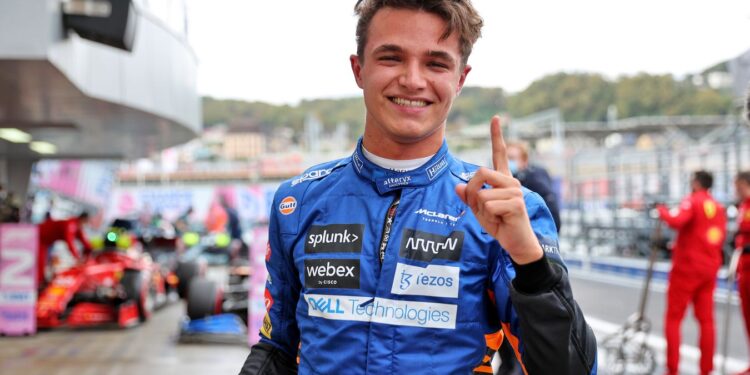 Russian Grand Prix – Despite being delighted with his first F1 pole, Lando Norris admitted that it is possibly the worst track to be starting from the front.

After being a pole contender on a few occasions this year, Norris has finally managed to secure the fastest lap when it counted and take his debut pole today at the Sochi Autodrom.

“Oh boy. It feels amazing, I don’t know what to say,” Norris told Johnny Herbert after the session. “Quite a manic session but also going well and obviously we made the decision in the end to go slicks. But I dunno, you never think you’re going to get a pole until you get it and now I’ve managed to do it. So yeah, extremely happy and a big thanks to the team as well, they’ve done an amazing job.”

Both Norris and McLaren were ecstatic to have the team’s first pole since 2012 but the British driver is not overly optimistic about his chances at the start tomorrow.

“I’m not really looking forward to it. I’m not looking forward to being first down to turn 1 tomorrow, but you never know. It’s going to set us up well and we’re in the best position we can be in. I’m happy, it’s my first pole position – hopefully the first of many – and yeah I dunno, just really happy and don’t really know what to say.

“It was tough. It was tough. I’m honestly going to make myself sound good but it was tricky, it was really that crossover section and the lap before I was 2 seconds down and I wasn’t very confident we were going to improve on the previous lap but i kept the tyres warm and prepared the final lap and I risked quite a bit I’m gonna admit, and it paid off so, I’m a happy boy.”

The McLaren racer expanded on why Sochi isn’t the ideal track for pole in his interview for the F1 website, saying “If I want to be on pole anywhere in Formula 1 it’s not here. One of the longest straights, or maybe yeah the longest straight down to turn 2 so, not ideal. I wouldn’t swap it but yeah, not ideal.

“I’ll do my analysis tonight on what it’s like to go down there cos it’s not always a guarantee if you’re pole here that you’re going to be first into turn 2 so it’s going to be a tricky start, tricky first lap but we’re still in a good position no matter what to have a good say tomorrow and score some good points. So, wait and see and I’m excited for it.”

Despite the possible difficulties facing him in tomorrow’s grand prix, Norris is very proud of achieving a childhood dream especially in the tricky conditions that faced the drivers today.

“It feels incredible, to dream of this since I’m a little kid and now for it to actually happen. I guess there’ve been a few times this season where I’ve been close and I’ve had the opportunity to do it but missed out for various reasons, sometimes my own mistakes and sometimes ours as a team, and today I managed to put it together and do it again. Happy.

“I love these conditions obviously and it’s, I think one thing that makes it even better is the risk you’ve got to put into a lap like that, the unknown, to just go into a corner and just hope for the best, if you make it through on the exit you’re like “one down, plenty more to go”. It’s an amazing feeling and it all paid off in the end so I’m a happy guy.”

With the pole coming at the first race after McLaren’s 1-2 in Monza, Norris joked that “We’re dominating. McLaren, we’re unstoppable.” Before adding “No, I don’t get my hopes up. We achieved a lot today, a great result for me and the whole team obviously. Our first pole position in god knows how many years as well.”