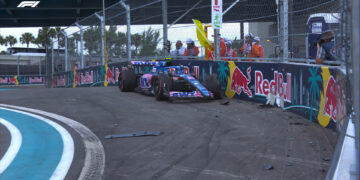 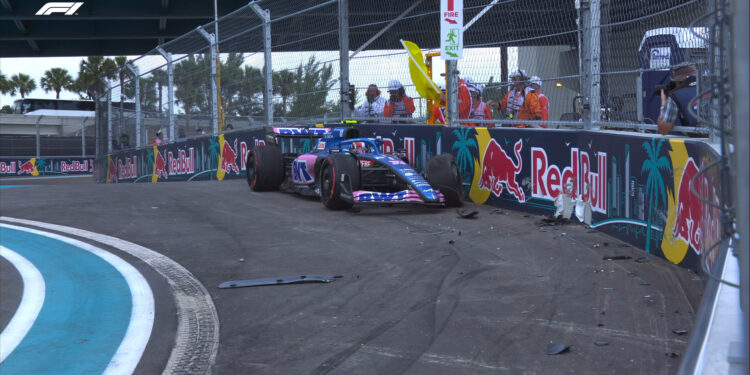 Miami Grand Prix – The two drivers have said the lack of Tecpro barriers at turn 14 is “not acceptable” and that the FIA “push harder” for driver safety.

Both Carlos Sainz and Esteban Ocon had similar session-ending incidents at turn 14, Sainz’ during second practice on Friday breaking the front left corner of his car, whereas Ocon’s incident in the final practice was so heavy that it cracked his chassis, which ruled him out of qualifying.

Despite being a relatively slow-speed part of the circuit the Alpine driver’s incident registered at 51G, the same as Max Verstappen’s high-speed impact at the British Grand Prix last season , which meant Ocon had to make a compulsory visit to the medical centre.

The Frenchman said afterwards that while he was hurting, he would be fine to take part in the race but that the impact made with the wall was much harsher than it should have been.

“It hurts, definitely,” Ocon said to Sky Sports F1. “It was 51G. It was a hard impact but I will be fit to race tomorrow, that’s the main thing. I lost the rear in the worst possible place on the track so I have to apologise to the team for what happened. It’s a mistake that I don’t usually do, it’s been a while since I’ve done one like that.

“Clearly what’s a bit disappointing is the chassis change really. The impact has been so hard in comparison to what it should have been and we’ve discussed it with Carlos yesterday with the Race Directors to say that we should probably put a Tecpro barrier there and it hasn’t been listened to. That is not acceptable and the FIA should push harder for our safety.”

Keep an eye on Turn 14, it's certainly proving to be a precarious one 😅#MiamiGP #F1 pic.twitter.com/smymjcJMEJ

Sainz was also not happy with the lack of action from the FIA. The Ferrari driver qualified P2 behind his teammate but told Sky Sports F1 that he was experiencing a bit of pain from his crash on Friday and that’s not something that should happen after a second gear incident.

“I’m sorry to be critical,” Sainz said, “but I told the FIA yesterday that my crash at second gear shouldn’t feel that hard but today my neck was a bit in pain. I told them let’s put Tecpro there because it’s a very hard concrete wall. Esteban went to crash and I’m pretty sure he felt it too. It’s one of those things that I will never understand.”