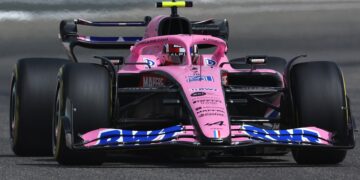 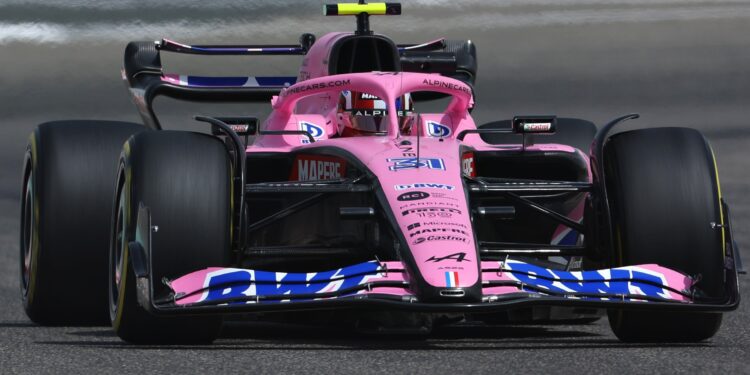 Pre-season testing 2 – Esteban Ocon topped the times for Alpine during the morning while Williams saw the brakes and rear of Latifi’s car go up in flames.

Day two of testing started out slowly at an overcast Bahrain circuit. Alfa Romeo’s Valtteri Bottas was first out but the Finn, like the other handful of drivers who made an early appearance, was soon back in the garage so it was George Russell in the slimline Mercedes who had the track to himself for most of the first twenty minutes.

Lando Norris was once again behind the wheel for McLaren as Daniel Ricciardo was still not feeling too well. Despite having the whole day yesterday, Norris did not manage to rack up all that many laps as brake issues prevented the team from doing long runs.

The biggest change overnight was with the Alpine team, they have seemingly decided to test out their alternate livery – the all pink version which will be seen at the opening two races of the season. The colour change seemed to be a good change up as Esteban Ocon jumped to the top of the times half way through the first hour of the day with a 1:36.472 and then an hour later knocked a couple of seconds off that with a 1:34.276.

It was not a great morning for Williams. Just over an hour and a half into the four hour session the British team had only 12 laps on the board when Nicholas Latifi’s brakes went on fire. The Canadian tried to bring his FW44 back to the pits but the car ended up spinning and then the rear going fully on fire when the car was stationary. Latifi and marshals got fire extinguishers on it though, it looked like a wheel exploded as they did. The session was, unsurprisingly, red flagged.

It was slightly awkward timing for the Sky F1 commentary team as Latifi’s teammate, Alex Albon, had just joined them in the comms box for a chat when that happened. The Thai driver rallied quickly and managed to joke that Williams had been having issues with their brake temperatures, so they tried adding flames.

Things were pretty calm after the track went back to green after about 30 minutes under red flag conditions. A few minutes inside the final hour Sebastian Vettel had just left the pits in his Aston Martin but seemed to have a problem, reported to be a problem with the rear right wheel, which saw him pull off onto a service road and stop the car. As he had taken the car well out of the way, there was no disruption to the session.

With fifteen minutes left of the morning session there was another appearance by the red flag, this time as an FIA software and restart test. It was bad timing for Vettel though who had just put on fresh tyres and returned to the track after his on-track stoppage.

There was a standing start planned and that saw Vettel and Valtteri Bottas line up on the grid while Charles Leclerc pulled up behind them after a bit of waiting. The pit exit had been closed so no cars would get in the way of the start which left Max Verstappen and George Russell sitting waiting, but then the start was aborted for a formation lap which would have allowed the extra cars to join the test start, however that did play out as expected.

On the formation lap Bottas’ team told him to park his Alfa Romeo and so the Finn pulled onto the run off and stopped, which brought out the red flag once again and that was the end of the morning running.

It ended with Ocon’s lap from the second hour being unbeaten while the fastest driver from yesterday morning, Leclerc, just 0.090 seconds slower. Russell had the most laps on track after circulating 67 times while Latifi, after his fiery exit from morning testing, had the least with just 12.

Mick Schumacher was out in the Haas this morning but his day ended earlier than expected when the team found an exhaust issue on the car, and McLaren once again failed to pass the 30 lap mark in a session this week but Norris will be back in for the afternoon as Ricciardo is still not up to it.