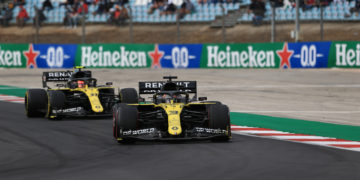 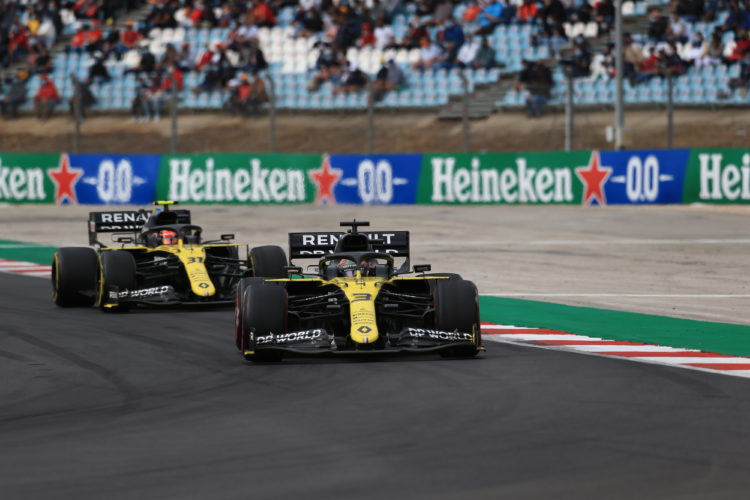 Esteban Ocon has struggled to keep up with Daniel Ricciardo for most of 2020, and had to watch on as the Australian claimed the team’s first podium as Renault in almost a decade last time out at the Nurburgring.

However, Ocon got the better of Ricciardo at Portimao on Sunday after starting behind the Australian. Ricciardo had started from P10 after crashing his car at the end of Q2, unable to take part in Q3 as a result. Ocon started from P11, and chose to start the race on the Medium compound. Ricciardo was forced to start on the Softs despite not taking part in Q3.

Initially, Ricciardo’s race got off to a better start as he capitalised on the early grip with the Softs. Moving up to P8, the Softs faded fast and he came in on Lap 14 to swap to the Mediums.

Esteban Ocon, by contrast, played the waiting game by starting on the Mediums. While he struggled at the start for grip, just like the other Medium runners, he didn’t pit until Lap 53 – 12 laps beyond what the Mercedes drivers did on the same strategy.

Ocon took on the Softs for the final fifteen laps to the flag, coming out of the pits just ahead of Ricciardo, but wasn’t able to catch the pack of Gasly, Sainz and Perez in front to rise up the order further.

“That was a good race for me.” said Ocon after the race. “It was very hard at the start being on the Mediums, but I kept calm and together with the team we managed it extremely well and made sure we remained competitive throughout. I completed 53 laps on them! They seemed to last a long time and my pace was strong even towards the end of the stint. It kept raining too in short spells, so we had to be mindful of that with the grip levels. In the end I think we did a good job to get both cars inside the top ten.”

Ocon had a great scrap with the recovering Sergio Perez during the race, with both going side by side through several corners. The pair have a history of clashing on track during their time as teammates, but there was no such drama on this occasion.

“The fight with Perez – I wanted to let him go, because we were losing time overall!” said Ocon. “It was very tight, but very nice. After that, we lost a bit of time in the pit stop, but the guys have done a great job all year so overall, to get two cars in the points like we did today, on a difficult weekend for us, it’s very solid, and it shows we can perform even when it’s not at its best.”

Asked about how much satisfaction he got from beating Ricciardo across the line, with Daniel finishing in P9, Ocon said he’s pleased with the progress he’s made in that regard.

“I’m happy to be in front of him. I’m coming closer and closer to him, so it’s feeling great recently.”