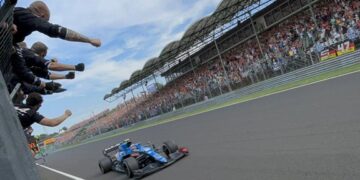 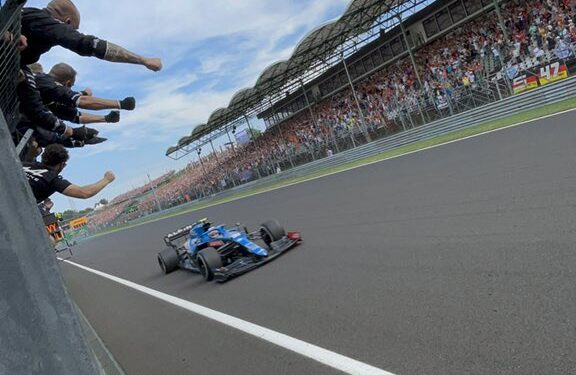 The ensuing melee took out McLaren’s Lando Norris and Red Bull’s Sergio Perez, as well as damaging championship contender Max Verstappen. The Dutchman finished tenth whilst championship rival Lewis Hamilton finished on the podium in third place. Sebastian Vettel took second place for Aston Martin despite running close behind Ocon for much of the race.

An early shower looked to set up a thrilling race, however proceedings were paused due to an early safety car and red flag period with a multi-car accident into Turn 1.

Bottas bogged down at the start and slipped down to fifth after being overtaken by the fast starting Norris and Sergio Perez. However, the Finn missed his braking point and ploughed into the rear of the McLaren, which set off a chain reaction. Norris then slammed into Verstappen whilst Bottas hit Perez. The Safety Car was immediately brought out to deal with the aftermath. As a result of his accident, Bottas will have a five place grid penalty for the Belgium Grand Prix.

The Mexican and the Finn retired immediately whilst Norris limped back to the pits for repairs but had to retire the car. Red Bull elected to pit Verstappen and he came back out under the Safety Car, but lost a huge piece of bodywork leaving the pitlane.

Whilst the chaos reigned at the front, the mid-field also saw its share of drama as Aston Martin’s Lance Stroll tried to take avoiding action at the start, but clambered over the kerbs and hit Ferrari’s Charles Leclerc. The Frenchman then made contact with McLaren’s Daniel Ricciardo who spun.

The red flags were then brought out to deal with the ensuing debris. Miraculously, Red Bull were able to perform repairs on Verstappens RBR16B and the Dutchman was able to restart.

At the restart, Leclerc, Perez, Bottas, and Norris had all retired from the race having been unable to affect repairs to their cars.

With the track now drying after the first start the cars then lined up for the second standing start of the afternoon.

However the drama didn’t stop there as all drivers bar Hamilton came into the pits, therefore the Mercedes driver was the only one to take to the grid on the restart. As the five lights came out for the lone Mercedes, the rest of the cars pitted for slicks on the now dry track.

When the cars emerged from the pits, Williams’ George Russell was leading the pack behind. Hamilton came into the pits to change tyres, but Russell had to yield positions due to undercutting a number of drivers in the pitlane.

Further drama ensued as Haas driver Nikita Mazepin had a pitlane collision with Alfa Romeo’s Kimi Raikkonen. The Finn came out in front of the Haas driver and the resulting clash damaged the Russian drivers suspension and he was forced to retire. Raikkonen was immediately put under investigation and received a 10second time penalty of unsafe release.

As the race settled down, Alpine’s Esteban Ocon lead from Aston Martin’s Sebastian Vettel and surprisingly, Williams’ Nicholas Latifi. Verstappen was down in 11th, whilst Hamilton at the back of the pack.

On Lap 14 Verstappen and Haas driver Mick Schumacher battled for the last points position. As the pair came into Turn 1, Verstappen tried a move on the inside of the German, but Schumacher held his line forcing the Dutchman to run wide. Verstappen finally go the move done into Turn 2, after a cheeky bump of wheels between the pair.

Schumacher then started to fall down the order as Pierre Gasly took the Haas driver a lap later, followed by Hamilton a lap after that. Meanwhile, Raikkonen came into the pits to serve his penalty and changed for hard tyres resulting in a 17 second stop for the Alfa Romeo driver.

Up front, Vettel managed to eat into Ocon’s lead and got within a second of the Alpine car. Thankfully for the four-time world champion, Latifi behind helped the pair build a healthy lead of 12 seconds over the rest of the field.

On Lap 20, Hamilton came into the pits to make the most of clean air and the Briton rejoined in 12th on hard tyres. This opened the door for Verstappen to make a pitstop, as well as Ricciado. The McLaren managed to get out in front of Verstappen, but as they left the pitlane, a charging Hamilton was able to claim the position over the Red Bull and, crucially, Ricciardo.

On Lap 23 Hamilton managed to pass Russell for tenth, and then immediately caught Schumacher a lap later. The Mercedes driver then made a pass on seventh placed man Latifi, whilst Verstappen still languished down in 12th, unable to find a way past Ricciardo.

As the medium runners pit window opened on Lap 31, Gasly came into the pits for hard tyres. Meanwhile, Sainz started to chip away at the leaders advantage from 17 to just 10 seconds.

On Lap 32, Hamilton made a move on Tsunoda whilst Russell and Schumacher tussled for ninth place. The Williams driver came out on top as Ricciardo and Verstappen got the German driver a lap later.

On Lap 37, Vettel made his stop for fresh hard tyres. The German managed to come out ahead of Sainz and Hamilton, but behind Fernando Alonso. Ocon pit his Alpine a lap later promoting his teammate into the lead. When Ocon emerged from the pitlane, he was just ahead of Vettel and maintained his net lead of the race.

Alonso came into the pits on Lap 40 and rejoined the race behind Hamilton in fifth place which freed up the duel up front between Vettel and Ocon.

On Lap 40, Verstappen came into the pits for fresh tyres having been stuck behind Ricciardo’s McLaren for much of the race. The Dutchman rejoined the race in 12th place behind Raikkonen.

On Lap 48, Hamilton entered the pits for brand new medium tyres and came back out behind Alonso in fifth place. A lap later, Gasly and Tsunoda swapped positions via team orders promoting the Frenchman into sixth place.

With the bit between his teeth, and on fresher tyres, Hamilton managed to claw back the time lost with the pitstop. On lap 55, the Mercedes driver tried to make a move on Alonso, but couldn’t make it stick.

On Lap 61, Verstappen managed to pass the wounded McLaren of Ricciardo for the final points paying position.

The battle between Alonso and Hamilton raged on until Lap 65 when a mistake by Alsono allowed Hamilton to make a move down the inside of Turn 1. It didn’t take long for the seven-time World Champion to get close to the gearbox of third place man Sainz with just four laps to go.

On Lap 67, Hamilton managed to make a move on Sainz with an extra tow from the lapped McLaren of Daniel Ricciardo. The Mercedes driver promoted himself up to the podium and into third place.

Hamilton was unable to catch Vettel in time and ended up in third.

Sainz finished in fourth place ahead of Alonso in fifth. Gasly, who set the fastest lap, and Tsunoda finished in sixth and seventh ahead of the two Williams cars in eighth and ninth. Those will be valuable points for the British team. Verstappen rounded out the top ten.