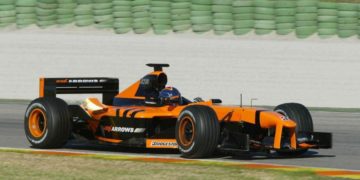 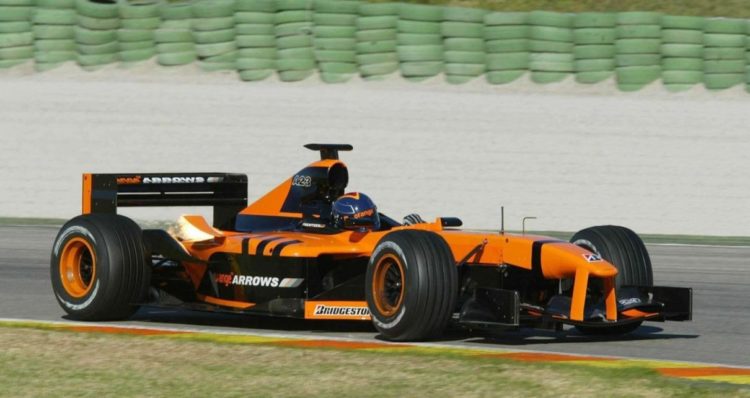 On this day in Formula 1, in 2003, Arrows met their demise after struggling through their final couple of years.

One of F1’s most beloved teams officially withdrew from the sport on this day, back in 2003. After a tediously long and drawn out goodbye, the team which had started 382 races without ever managing a win, went into liquidation and a large portion of its assets were sold to Minardi.

From promising beginnings, drawing on the expertise of several industry veterans such as ex-Shadow Team Principle Alan Rees and former racing driver Jackie Oliver, the team was formed in November of 1977 and made their first competitive appearance at the 1978 Brazilian Grand Prix – a turnaround time of just 3 months!

Their F1 debut, however, was mired by legal controversy after the team became embroiled in a contentious High Court battle with Rees’ former employer (Shadow Grand Prix) over copyright infringement. It was eventually ruled that the Arrows inaugural car, the Arrows FA1, was indeed a carbon copy of the Shadow DN9 and the team were prohibited from racing it.

The team’s initial sponsor, Italian Businessman Franco Ambrosio (and the FA1’s namesake!) was also no stranger to the long arm of the law that year, after being jailed in Italy in 1978 for financial irregularities. Thereafter, German Beer company Warsteiner assumed title sponsorship of the team.

Just as the team thought the worst of their troubles were behind them, their driver Riccardo Patrese was accused of causing a multi-car collision at the 1978 Italian Grand Prix which would eventually claim the life of his racing peer, Ronnie Peterson. At the behest of his fellow drivers, Patrese was subsequently banned from competing in the following race, the United States Grand Prix; although he was later cleared of any wrongdoing pertaining to the accident.

The 1980’s heralded in a new decade of moderate success for the team, whereby they performed reasonably well in the Constructors Championship, finishing joint 8th with Alfa Romeo in 1981, backsliding to 9th in 1984 and returning again to 8th place in 1985.

Internal frictions within the team led to a disastrous 1986 season, after a disagreement between the founding members led to Tony Southgate’s departure for rival team, Tom Walkinshaw racing.

The years 1987 – 1989 saw the Arrows team achieve their best performances yet, thanks to the dynamic driver pairing of Eddie Cheever and Derek Warwick gaining points in most races. The culmination of this success came at the 1989 United States Grand Prix, where, in his hometown of Phoenix, Cheever finished the race in P3 – this would be his last ever podium in the sport.

1990 saw the team’s livery being given a facelift, and they were accordingly rebranded as “Footwork Arrows” – a name that would remain in place until Japanese Businessman Wataru Ohashi eventually withdrew his financial backing in 1996. Despite securing a deal to race with Porsche V12 engines in 1991, the power unit produced was overweight and underpowered, rendering the car uncompetitive.

After a brief partnership with Ford for the remainder of 1991, the team changed to Mugen engines for the 1992 competitive season. The switch paid off, with 1994 becoming one of their strongest seasons in the sport, despite significant budget limitations. The post 1996 sponsorship vacuum caused by Ohashi’s exit ultimately meant the cash-strapped team had to begin taking on ‘pay drivers’ to stay afloat.

1996 saw a buy-out of the original founding members, with Tom Walkinshaw becoming the team’s majority shareholder. His first order of business was to revert the team to the classic Arrows branding and the racing outfit thereafter became known as “TWR Arrows”. Walkinshaw was determined to turn the team’s mediocre fortunes around and hoped that the signing of World Champion Damon Hill would do just that. Hill stayed with the team for just one season before being lured away by Jordan in 1998. The 1998 season was a watershed moment in the team’s history, as they began the in-house construction of power units, rather than outsourcing the manufacturing, as had been done in the past.

Lack of funding continued to be an issue for TWR Arrows for the remainder of the 90’s, however, they ushered in the new Millennium having managed to secure a lucrative sponsorship deal with Telecommunications giant ‘Orange’. The year 2000 also saw the return of Jos Verstappen to the team; he had previously driven for them in 1996 alongside Spaniard Pedro De La Rosa. Despite the newly designed Arrows A21 boasting excellent aerodynamics and good rear end stability, both drivers struggled to be competitive, with Verstappen scoring the team’s only point that year in Austria.

Following the failed experiment of in-house engine production, the team again decided to externally delegate this activity in 2002. This same year saw Arrows being put back through the legal wringer and marked the beginning of the end for the team as debts continued to mount. After dropping Verstappen in favour of the newly available Heinz Harald Frentzen, the scorned Dutchman successfully sued them for breach of contract. A further costly payout ensued when the team lost its ongoing dispute against Pedro Diniz, after he had departed Arrows and taken his funding with him to Sauber in 1999. They say bad things come in threes, right? Well, the saying definitely rings true in this case! Eventually, Frentzen (who had been contracted on a race-by-race basis) also got in on the (legal) action and sued TWR Arrows for outstanding wages. This was the final nail in the coffin for the team and, after sponsorship investment dried up, they ran out of money mid-season and did not take part in the remaining races on the calendar.

Despite receiving interest from numerous potential buyers and at least 2 legitimate buyout offers, the team went into liquidation at the end of 2002. A consortium led by the friend of former owner, Tom Walkinshaw, purchased part of the team’s assets, specifically the engines, believing that (together with other holdings acquired following the bankruptcy of Prost Grand Prix) this would be sufficient to gain them entrance for the 2003 F1 season. However, the FIA viewed the consortium as a new entry, therefore subject to entry fees, and their application was subsequently rejected.