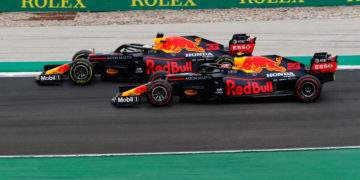 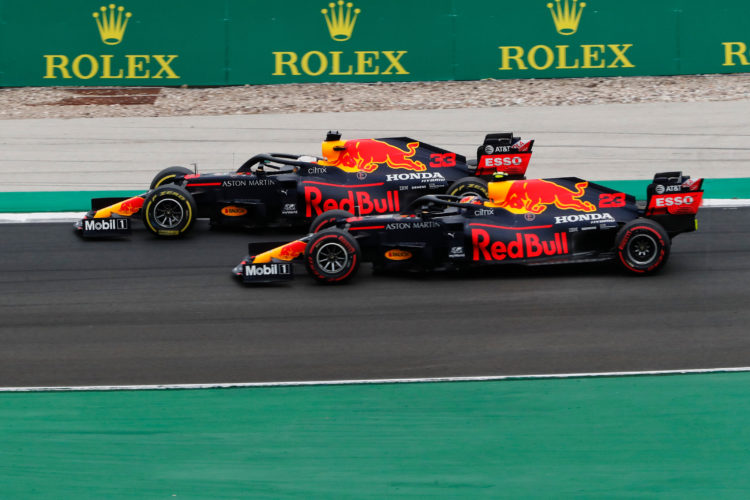 Portuguese Grand Prix – Red Bull team boss Christian Horner has urged Alex Albon to ‘grab his seat’ for 2021, as he’s been given an ultimatum to stay with the team.

Alex Albon is unconfirmed as a Red Bull driver for 2021, having struggled for form throughout most of this year.

Heading into the Portuguese Grand Prix weekend, team boss Christian Horner told Sky Sports F1 that the second Red Bull Racing cockpit is Alex’s for 2021, provided that he can rise to the occasion, and fast.

With Helmut Marko saying recently that the team intend to decide on their two team line-ups before the Turkish Grand Prix, Horner said:

“It’s Alex’s seat to lose really. We’re getting to a point in the year where we’re going to need to make decisions, really within the next two or three weeks about our line-up for next year.”

Having publicly supported Albon on numerous occasions so far this year, Horner said: “Our hope and desire is that Alex demonstrates and just grabs that seat by the scruff of its neck and owns it.”

With Horner having told Sky Sports Germany that Albon had ‘give or take’ two race weekends to convince Red Bull of his quality, the British-Thai driver had a nightmarish weekend immediately. Albon could only manage P6 in qualifying, half a second off the pace of Max Verstappen and separated from him by Charles Leclerc and Sergio Perez. The half a second gap is considerably more than the 0.3 seconds that Marko has already said is the acceptable difference between Verstappen and his teammate.

However, points are won on Sunday, not Saturday, but Albon made life difficult for himself almost immediately. He fell down to P8 behind both McLaren drivers at the start, and then made an error at Turn 3. With Perez spinning out, Albon settled into P7 but was then mugged by Kimi Raikkonen as the Finn shot up the order on the first lap. Albon finished the lap in P9, not an ideal situation after starting on the Softs.

From there, Albon was passed by Alpha Tauri’s Pierre Gasly, Racing Point’s Lance Stroll and Renault’s Esteban Ocon. With just two laps done, he was down in P12 and was always going to struggle to recover.

“It was a tough race and we struggled for grip right from the beginning.” Albon said afterwards. “I think the car was fast but we couldn’t show our true pace whilst we were stuck in traffic. I didn’t get off the line very well and for the first three laps we struggled with tyre temperatures, so we kept locking up the fronts. Once the tyres were hot, the car was good but recently we’ve been struggling to switch the tyres on and that just sent us backwards into traffic.”

In an attempt to do something different, Albon did two stops – also necessitated by very high tyre wear that meant his rears were in bits by the time he pitted for a second time. He finished down in P12, and behind the lower midfield car that is the Alfa Romeo – a damning result for a race without any extraneous circumstances to explain the gap. He finished a lap behind Max Verstappen, who finished on the podium. A similar gap to Max got Pierre Gasly demoted from the team in mid-2019. The result meant that he has only scored a single point in the last three races.

“Once you get caught in a DRS train it makes it very hard to overtake.” said Albon. “We tried to react by doing something different with a two stop strategy but looking back maybe that wasn’t the best thing to do.”

Red Bull have already said that they have no intention of promoting from within again, ruling out Pierre Gasly from a return to the senior team. That lack of internal pressure won’t save Albon from losing his seat though, as Horner has also said that an external hire of someone like Nico Hulkenberg or Sergio Perez is entirely possible.

“The reality is there’s not so many races left in the season, and it’s getting to that time of year where we need to start thinking about next year,” said Horner. “So, I think within the next few weeks, we’re going to have to make a decision. We know what all the options are. We’re committed to Alex for this year and everybody in the team wants him to lay claim to the seat next year.”

Horner said he understands the pressure that Albon is under, and is hopeful that he can respond to that before the team have to make the hard call.

“He’s a great guy. We believe he does have talent. He’s still only in his second year of Formula 1, and it’s tough, it’s very tough. It’s mentally tough. It’s tough going up against Max.”

However, nothing in Albon’s driving suggests that he’s capable of turning thing around. Like Gasly in 2019, Albon’s body language is one of defeat and self-doubt – the complete opposite of Verstappen’s brash, bordering on arrogant, inner belief. His early performances with Red Bull were good, but that was at a time when there was no pressure on his shoulders. An initial lack of qualifying pace was balanced out by some strong racecraft but, as the pressure to improve has increased, Albon’s performances have collapsed. It’s hard to imagine Verstappen experiencing a single moment of self-doubt, which is in stark contrast to the meek comportment of Albon in 2020.

If Albon is demoted from Red Bull Racing, and released from Red Bull entirely, it’s likely he’ll actually leave F1 due to a lack of options. Alpha Tauri’s line-up looks certain to be Gasly and Formula 2 promotion Yuki Tsunoda, while vacant cockpits at the likes of Haas and Alfa Romeo have far more likely candidates already lined up.

Albon’s arrival into Formula 1 at the start of 2019 was a bit of a shock, considering he had been signed to Nissan’s Formula E effort at the time. Having already been dropped from Red Bull’s driver programme in 2012, Albon’s head was understandably turned by F1. Nissan boss, the late Jean-Paul Driot, was willing to let Albon chase his dream and, out of nowhere, Red Bull had brought back a man they dumped unceremoniously seven years prior. However, as quick and dramatic as his arrival was, it looks like his departure will come as no particular surprise less than two years later.