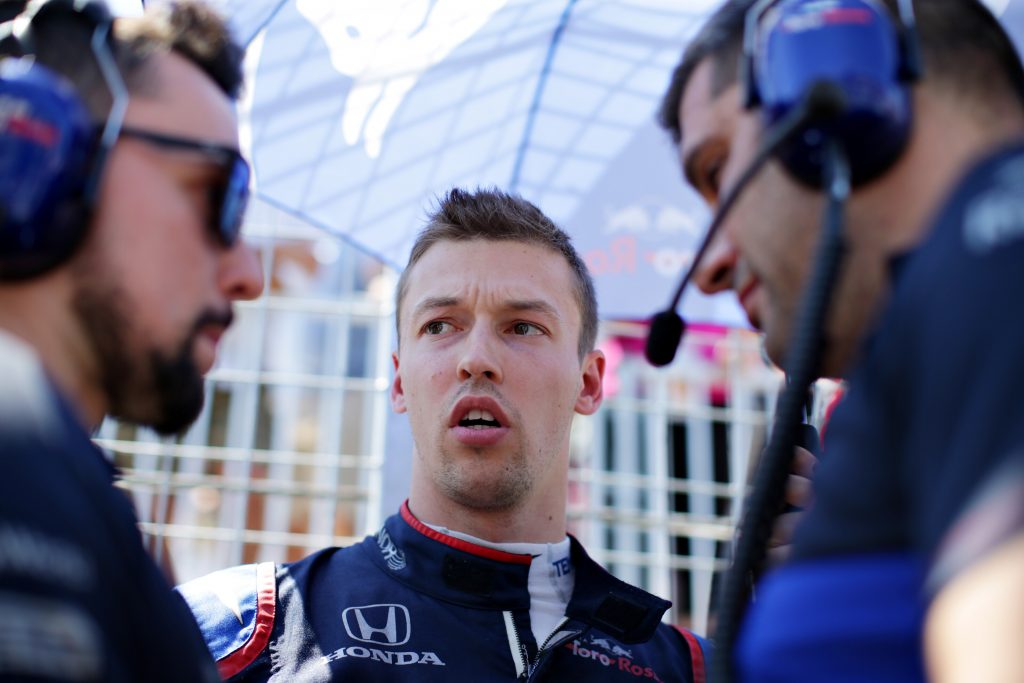 After a steady start to the season for Pierre Gasly, is it time Red Bull played musical chairs again and return Daniil Kvyat to the seat he lost three years ago?

Montreal was another strong weekend for Daniil Kvyat. Since his return to Formula 1 with Toro Rosso after just over a season on the sidelines, he’s scored four points finishes out of the seven races so far. They’ve been convincing finishes too, meritorious results where he has been vying at the upper end of the so-called ‘Formula 1.5’ – the drivers and teams behind the leading trio of Mercedes, Ferrari and Red Bull. While Kvyat is still ‘only’ on ten points, this is only seven points off the leader of F1.5 Carlos Sainz – a man who Kvyat enjoyed a great scrap with during Sunday’s race and overtook in the final stages to rob the last points position.

After qualifying outside the top ten in Canada, at a track where Toro Rosso didn’t look as sharp as they had in the previous round in Monaco, Kvyat still outqualified Alex Albon by 0.2 seconds. Aside from the first two races of the year, this has been a fairly consistent advantage that Kvyat has enjoyed over his teammate and this advantage stretched to 0.4 in Monaco qualifying. When the STR14 has been a competitive car at any of this year’s Grands Prix, Kvyat has looked quick, decisive and is scoring points more often than not.

That confidence extends off track as well. Dating Kelly Piquet since early 2016, he is on the verge of becoming a father for the first time, with Piquet confirming she is expecting a baby girl later this year. After being ditched entirely by Red Bull after 2017, Kvyat found refuge with Ferrari as a simulator driver. He also got the chance to carry out tyre testing for Pirelli, driving the SF71H. With Red Bull backed into a corner by late 2018 after failing to be impressed by Brendon Hartley and Daniel Ricciardo’s shock departure to Renault, they had to cast around a bit. Who, internally, could step into the Red Bull at such short notice? The only option, really, was Gasly. But who for Toro Rosso? With external signings undermining the very purpose of their junior programme, Kvyat was a no brainer.

After two years of turmoil after his first demotion from Red Bull to Toro Rosso and then out of the Red Bull programme entirely, the experience seems to have completely calmed Kvyat. His results were poor in 2017, his driving erratic and occasionally desperate, and his overdriving was causing him more harm than good. The year out and the gaining of perspective for this season has resulted in his team boss, Franz Tost, saying that the Russian came back as a more ‘measured’ driver:

“We all know that Daniil Kvyat is a very highly-skilled driver – he’s shown that in the past. He won GP3 in his first year racing with us, he put in a very good performance in 2015 with us and then off to Red Bull Racing. I just think it all happened a bit too fast. He came back to us and there were some problems with our car in those days – we were not so competitive.”

“Daniil was then at Ferrari for a year as a simulator driver where he had the chance to learn a lot, to get more measured and the Daniil we have back now – he’s the Daniil we know from former times.”

“Daniil is much more experienced now. He is much more mature. He understands the technical side
much better. Last year, as well all know, he was working at Ferrari in the simulator. I think that he
learned there also a lot and everything is coming together with him and therefore he is showing a good
performance.”

On the other hand, Pierre Gasly has been having a pressure-filled start to his Red Bull career. After two separate crashes in pre-season testing that compromised the team’s run programmes during both weeks in Barcelona, Gasly has scored five points finishes. He’s occupying the P6 position that would be expected of him in the Driver’s Championship, but there’s been little evidence that he is anywhere near capable of matching, let alone challenging, Max Verstappen’s relentlessly ferocious leadership of the team. P5 in Monaco is his best result so far, although a strong result in Azerbaijan did go begging when he encountered mechanical issues towards the end of the race.

A look back at Gasly’s form in the lower categories suggests that he is a man who takes his time to acclimatise to new surroundings. 2016, his title winning year in GP2 and his second full season in the series after a subdued 2015, took him until Race 9 at Silverstone to win a race before going on to a much more confident second half of the year. Departing for Japan’s Super Formula championship in 2017, Gasly finished P2 but, again, it took until the fifth round to finish on the podium.

There’s no particular criticism being made of Gasly’s performance just yet, and he hasn’t done anything glaringly wrong throughout the opening to this season. There’s just a sense that, like Kvyat back in 2015, the promotion from Toro Rosso has come too early in Gasly’s development as a driver. With Red Bull aiming to fight for race victories this year and appearing capable of displacing Ferrari as the second best team, Red Bull need two drivers firing on all cylinders and, right now, Gasly is not that man.

By owning two teams, Red Bull are in the very privileged position in that they can swap their assets around as they see fit – the drivers included. They did it, controversially, in 2016 to promote Max Verstappen as they felt him capable of doing more than Kvyat could but the young Russian didn’t mentally process the demotion particularly well. With Kvyat now appearing to be leading man material with more maturity, what’s to stop Red Bull from pulling Gasly back out of the spotlight and away from the intensive pressure that comes with being one of the expected top men? Handled correctly, it could be career making rather than damaging for Gasly while Kvyat gets the chance to prove to the men who gave him a second chance that he has turned it around. For added spice, the Russian would be paired up with the very man who was the reason behind his career freefall in the first place, making him extra eager to impress…

The notoriously ruthless Red Bull programme has chewed up and spat out countless drivers, most of whom you can now find at the top end of the Formula E or WEC field. Some extremely good drivers have been rejected by the Austrian company, with Dr. Helmut Marko saying in the past that Toro Rosso is not a long-term team for drivers – it is a team specifically used to find the absolute best talent for Red Bull. With junior driver Dan Ticktum now testing regularly for the team and actively trying to get a Superlicence, it’s seemingly only a matter of time until we see him at Toro Rosso. Both Kvyat and Albon are performing well with no reason so far to ditch either of them but…the backlog needs to clear. Unless Red Bull want to contradict themselves by keeping Kvyat on for yet another season as a ‘junior driver’ in 2020, it’s approaching time to give him the chance to show he’s either got ‘it’ or drop him for good. Think of the marketing potential too, as the redemption of Daniil comes full circle…