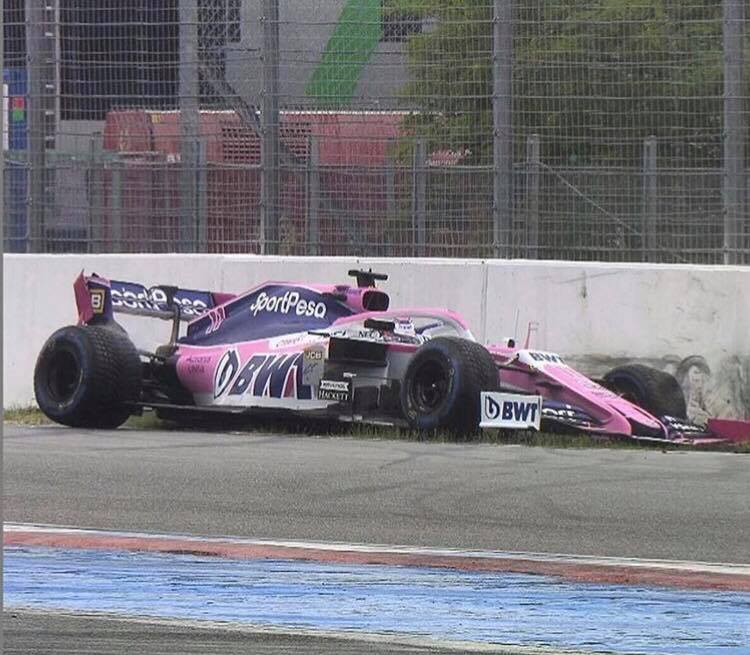 German Grand Prix – Racing Point’s Sergio Perez has held his hand up to apologise for his early retirement from Sunday’s race at Hockenheim.

Sergio Perez was the first retirement from Sunday’s chaotic race at the Hockenheim circuit in Germany. Starting from P8 on the Wet tyres, a relatively poor opening lap meant he was down in P11 after the first lap. Halfway around Lap 2, Perez lost the rear end of his Racing Point as he gingerly applied the throttle out of Turn 10.

It was a minor mistake with big consequences as his car flew off backwards and tapped the wall – the damage proving too great to be able to continue.

Watching on from the team garage as teammate Lance Stroll scored a tremendous P4 after a ballsy tyre call for slicks on Lap 44, Perez acknowledged his error and said: “I need to apologise to my team because I made a mistake. I’ve thrown away a great opportunity today to score big points for the team. The first rule in these conditions is not to make a mistake and I did. I was picking up the power and then had some aquaplaning on the rear. I lost it and just couldn’t recover from it. I put my hands up for it – I’m extremely disappointed with myself.”

With Racing Point scoring their first points after three races without a single score, Perez said the upgrades brought to the RP19 signal a clear step forward for the team as F1 moves into the second half of the season: “Watching the race from the garage is always tough, but I’m happy that Lance had such a great race.  We needed those points and it’s a boost for everyone. I think we’ve definitely taken a step forward this weekend. Now we look forward to Hungary where hopefully we can come back stronger.”