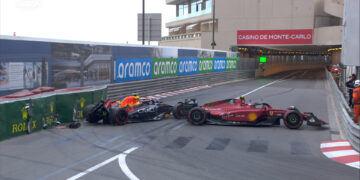 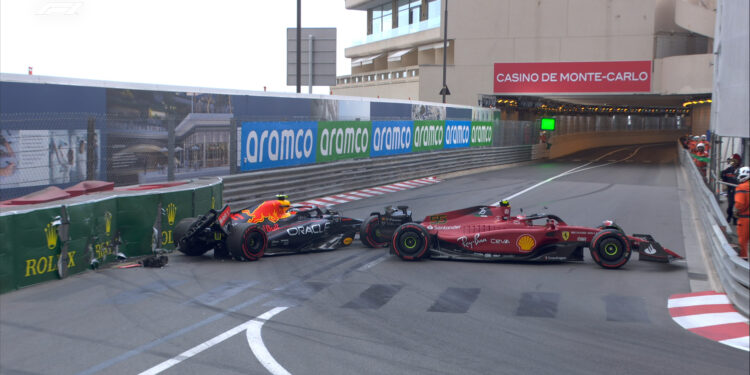 In the final minute of qualifying, as the drivers were all starting their last flying laps, Perez lost the rear of his car as he was turning the corner just before the entrance to the tunnel and his Red Bull hit the wall, stranding him on track.

A few seconds later, the yellow flags came out just as Carlos Sainz was headed into the corner after Perez and the Spaniard wasn’t able to avoid the stricken car, which then left the track completely blocked by the two cars and the red flags were then called to end the session.

The Red Bull driver said that the lack of temperature in his tyres were what caused him to spin and that his lap had also almost come to an end at the first corner.

“It was just a mess every Q3 lap with people not respecting the deltas,” Perez explained. “And I just ended up too cold. Everyone was backing out in the final sector so tyres were too cold. I already lost it nearly into turn 1 and I thought that the tyre was going to pick up some temperature through the lap, but it was just not there and I tried too much on the lap.

“I was, I think, quite close to my time, trying to make it up. Turn 8 has been a difficult one for me throughout the qualifying session so I was trying to anticipate and get quite early on throttle. But as soon as I touched the throttle, I could feel like the rear tyre was not gripping in and I was playing with it a bit, until I lost it.

“I was actually surprised that Carlos hit me at the time, and it was just a shame what happened. I feel sorry for Carlos, and for the rest of the guys but, you know, this is Monaco.”

It’s not the first time Monaco qualifying has ended early due to a late crash bringing out red flags and indeed last year saw Charles Leclerc initially look set to start on pole after his incident but unnoticed damage saw him not start the race. Perez believes that his car will be repaired and ready to go for the Grand Prix though he did apologise to his mechanics for the long night of work he’s caused them.

“It looked bad from the rear,” Perez said. “And what made it worse was the hit we got from Carlos. So, we have quite a bit of damage. But we’ll see. I think it should be okay for tomorrow.

“I think we’re very confident, the boys, I mean I’m very sorry it’s going to be a long night for them, but hopefully we can recover and be back tomorrow.”

Sainz meanwhile explained his part in the incident saying that: “As I was entering Turn 7, on my left hand side I see a yellow flag coming out. And immediately as I see a yellow flag, I realise that the car in front of me had crashed. You don’t see where he has crashed, so you enter the corner without knowing where he’s going to be. So I just hit the brakes.

“I tried to do the corner radius as tight as possible. And just as I was going to manage to avoid him, I hit the brake a bit harder and managed to clip his back with the back of the car. It would have been a pretty good save if I would have saved it, because there was basically no time to save it, but it’s what happens in Monaco.”

The Ferrari driver also lamented how it’s seemingly become tradition in Monaco that he can’t get his final qualifying lap in, but despite that, believes that Ferrari are in a good place for the race.

“Every year in Monaco,” the Spaniard said, “now seems to be a tradition that someone crashes in front of me or whatever and you cannot complete the lap that is normally the most exciting lap around Monaco. Anyway, it is how it is. We start P2. I think it’s a great position to start and tomorrow anything can happen, the rain, whatever comes comes, and we’re in a good position.”

Perez is set to start the race in P3 ahead of teammate Max Verstappen while the two Ferraris will be starting from the front row, with Sainz in P2.