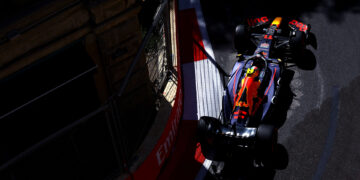 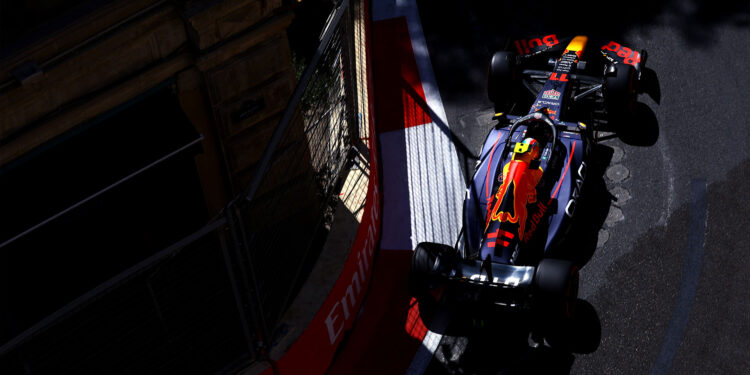 Azerbaijan Grand Prix – Sergio Perez ended FP3 on top, ended the session over half a tenth quicker than the Ferrari of Charles Leclerc.

After a crash at the end of the F2 race, the start of FP3 was pushed back by 15 minutes to allow barrier repairs to be completed, but despite that there was still an hour on the clock. The F1 regulations specify that qualifying cannot start less than two hours after the end of FP3, so it would seem that qualifying will then also start fifteen minutes later than originally scheduled.

When the track went green six cars headed out – both of the Haas, Aston Martin and Mercedes cars, but after putting in installation laps they all returned to the garages and the track was quiet again for a few minutes. Around the ten minute mark, after George Russell and Mick Schumacher headed back out, some of the rest of the grid also began to emerge.

The first time on the board was a 1:47.256, set by Russell, which was soon shuffled back and after twenty minutes Charles Leclerc had put Ferrari on top with a 1:45.260 while at that stage Lando Norris, Esteban Ocon and Alex Albon had only just headed out to the track while Max Verstappen didn’t make his first venture out of the garage for a few more minutes.

Control of the top spot of the timesheets was, as has been most of the season so far, flowing between the Ferrari and Red Bull’s Sergio Perez, Verstappen joined in once he started circulating but his first timed effort was just slower than his teammate’s 1:44.416.

Just before the session hit the halfway point, Ferrari were back at the top with first Carlos Sainz going fastest before Leclerc put in the first 1:43 time of the day with a 1:43.514. Further back, the Mercedes were once again struggling with porpoising, they weren’t the only ones, but neither Russell or Lewis Hamilton were happy with the rear of their cars but the seven-time champion was struggling more than his young teammate.

There was another lull in the track action around the forty minute mark but the majority of cars were back and continuing their qualifying preparations a few minutes later. There were a smattering of yellow flags in the final few minutes which made setting a time more difficult, Verstappen having to ease off on one of his attempts when Valtteri Bottas went into the runoff and struggled to get his Alfa Romeo into reverse gear after he could spin the car around in the tight space.

Another lap for the Dutchman was stymied by traffic so he ended the session over two and a half tenths off his teammate, Perez’ 1:43.170. Leclerc was P2 with a time 0.070 off the Mexican.

Sainz ended in P4, just over four tenths off the session best while the two Mclaren’s slotted into P5 and P6, Norris’ 1:44.418 over 1.2 seconds slower than Perez while Daniel Ricciardo was half a tenth further back.

Pierre Gasly put his AlphaTauri into P7 while Russell ended P8, 1.403 seconds off Perez’ time. Ocon took the chequered flag in P9 for Alpine with a 1:44.685 while Sebastian Vettel was 0.004 seconds further back to round out the top ten.