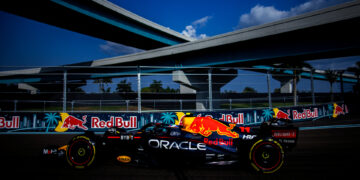 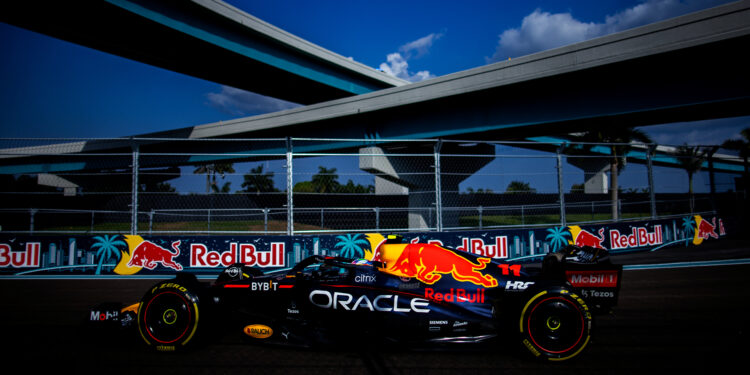 Miami Grand Prix – Sergio Perez topped the times for Red Bull in the last pre-qualifying session while Mercedes’ great Friday pace was nowhere to be seen.

After having missed all of the second practice, Max Verstappen was quick out of the pits when the final practice hour started. The Red Bull driver was out on the mediums and while his first time was a 1:34.037, and after just over ten minutes he was trading fast times, in the 1:31s, with the soft-shod Ferrari of Charles Leclerc.

After three red flags throughout the course of the opening two practice sessions, it took less than fifteen minutes for the first and only one of the third practice session to appear. Esteban Ocon’s Alpine was the car in the wall, the Frenchman having lost the car in a very similar fashion to how Carlos Sainz did in second practice yesterday.

By that point, Verstappen’s 1:31.355 was the best time, nearly four tenths ahead of Leclerc’s effort while Mick Schumacher was P3 with a 1:32.295, just managing to beat out Russell by 0.040 seconds. Only twelve of the drivers had set times, but all except the Williams cars and Zhou Guanyu’s Alfa Romeo had headed out to the track at some point.

The track was cleared and the session restarted with 33 minutes left to run, and all drivers, apart from Ocon, headed out straight away. It took half of that remaining time for a new fastest time to be set, Leclerc once again taking the top spot away from Verstappen with a 1:30.981. Ferrari didn’t hold onto it for long as first Sergio Perez and then Verstappen set 1:30.6s.

The McLarens were very late to start their soft running, having had both Lando Norris and Daniel Ricciardo circulating on hards for the majority of the session, the two had been at the bottom of the times but jumped up to 4th and 6th, while Alex Albon also set a very good time in his Williams to split the McLarens.

In the last ten minutes the track evolution kicked into overdrive as fast times came in and the timesheet was constantly changing. While Verstappen had a very close call with the wall just after T14, the Dutch driver hit the kerb which left him heading nose first towards the barriers, but slamming on the brakes saw him slide to a stop in time to save the car.

That close-call saw Verstappen fail to set another fast lap and so it was up to Perez to hold off the Ferraris, the Mexican driver did just that and posted a 1:30.304 to end P1, just less than two tenths ahead of Leclerc.

Verstappen was P3, the top three separated by three and a half tenths while there was a gap of almost the same between them and fourth placed Fernando Alonso, in the sole remaining Alpine. Sebastian Vettel saw his Aston Martin into P5 with a 1:31.049 just 0.001 second quicker than a very competitive, late lap by Schumacher.

The other Haas, with Kevin Magnussen was P8, the last driver within a second of the best time, and splitting the two American cars was Sainz in the other Ferrari, 0.868 seconds off Perez’ time. Albon was P9 for Williams with a 1:31.501 while Norris rounded out the top ten nine hundredths further back.

Mercedes, and especially George Russell, were the surprise of the day on Friday with the young Brit ending FP1 in P2 before setting the only sub-ninety second lap of the day, a 1:29.938, to end FP2 fastest. That pace however didn’t continue through to FP3 and both Russell and Lewis Hamilton finished in the lower positions, over a second and a half off the pace.