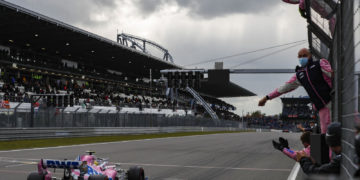 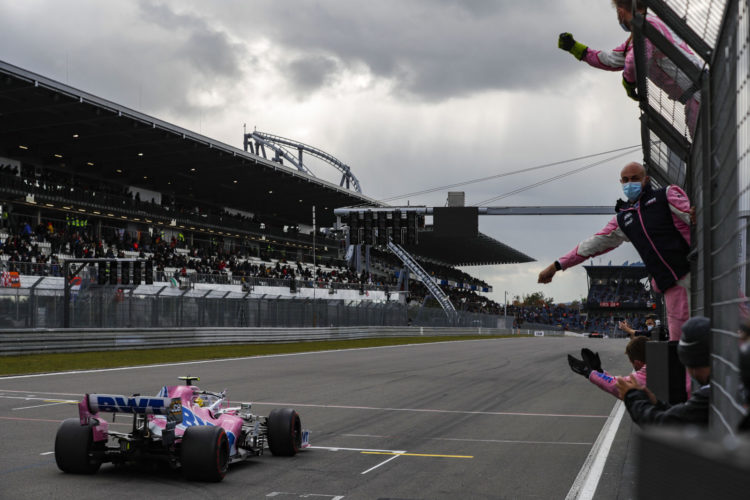 Eifel Grand Prix – Sergio Perez felt a podium was on the cards for Racing Point, until a Safety Car intervention prevented his strategy from playing out.

Perez was embroiled in a tense battle with Renault’s Daniel Ricciardo for the third step on the podium throughout most of the race at the Nurburgring, but ultimately lost out as the Safety Car was deployed to cover the recovery of Lando Norris’ McLaren from harm’s way.

Ricciardo had pitted on Lap 16 for the Mediums, with Perez not pitting for the same until Lap 28. That tyre offset meant that, with almost twenty laps to go, Perez was likely to close the 12 second gap to Ricciardo and tackle the Renault driver for P3.

The Safety Car coming out meant both drivers were able to pit again and fit fresh Softs to get to the end, with Perez unable to get past in the final stint.

Racing Point considered keeping Perez out on track to gain track position, and might have been able to defend with his Medium tyres being only 15 laps old at the time. But, in the end, Perez made the call to come in to put himself on level terms with Ricciardo.

“We actually stayed out [initially],” said Perez, “but I asked the team, ‘Are we sure about it?’ because we’ve done that in a couple of races and it didn’t work, and here being so cold, it was going to be really difficult to restart the tyres. So we boxed and we ended up in the same position, so I think that was a good call from the team.”

“Then at the restart it was again very close, good racing with Danny, and Max [Verstappen]. I couldn’t get [Ricciardo] and after that, we were just the same to the finish line.”

Racing Point moved up to P3 in the championship as a result of Perez’ P4, combined with Nico Hulkenberg’s great drive to P8 as he substituted for the ill Lance Stroll.

“I was expecting a very painful day in the championship,” said Perez. “But Nico has done a tremendous job, and good points for the championship… We came strong out of a bad day [on Saturday]. We had a solid start, good first lap and in general, I’m pleased with how my race went.”