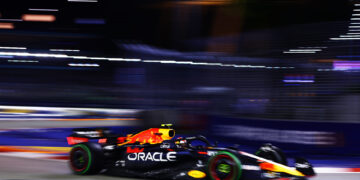 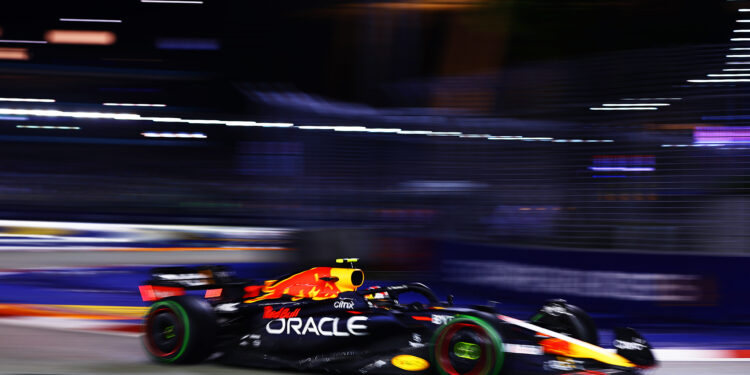 With an hour’s delay to the start time thanks to a downpour before the pit lane was originally meant to open, that saw the start procedure being delayed. The rain eased fifteen minutes before the original start time and it was then announced that the normal race start procedure would occur which pushed the start of the Formation Lap to 65 minutes later than it should have been.

The track had drained quite a bit in that time, but as in qualifying, there was still some areas of standing water so all cars would be starting on intermediate tyres, with 19 drivers on the grid while George Russell will be starting from the pit lane after changing power unit parts overnight.

After equalling Kimi Raikkonen’s race start record last time out in Italy, when he takes the start in today’s Grand Prix Fernando Alonso will become the first F1 driver to ever make it to 350 races and will now start to extend the most race start record with each race he now competes in.

At the front, Charles Leclerc will be starting alongside Sergio Perez and it was the Mexican who got the better start in the damp conditions, taking the lead on the run to the first corner while it all went wrong for his teammate Max Verstappen.

The Dutchman, who headed into the weekend with the possibility of wrapping up the championship, started in P8 after having to abandon his final pole run as there wouldn’t have been enough fuel left in his car for the mandatory sample to be taken. Verstappen bogged down at the start which saw him lose a bundle of positions, falling to P12 and having to fight his way back through, getting to P10 by lap 2.

Lewis Hamilton, who lost P3 to Carlos Sainz at the start, did not seem to be happy with his tyre choice at the start of the race, appearing to have wanted full wets as he told his team “I told you about these tyres, in future you need to listen to me. No grip.”

Over the following laps, Perez and Leclerc traded fastest laps at the front but hadn’t quite made it to sub two minute lap times, and the gap between the top two hovered around 1 to 1.5 seconds.

The first retirement of the race came on lap 7 when there was a clash between Zhou Guanyu and Nicholas Latifi, the Williams driver squeezing the Alfa Romeo behind him into the wall which ended in a puncture for Latifi, who was then retired after making it back to the pits, and the Alfa Romeo parked on track. The Safety Car was deployed but as it was so early in the race, and the track conditions hadn’t particularly improved, there was no rush to the pits for tyre changes.

The race was back to green flag racing on lap 11 and Verstappen was able to dispatch both Sebastian Vettel and Pierre Gasly over the course of the lap to get himself into P7. By lap 13 the reigning champion found himself right behind Alonso’s Alpine however, with the DRS not enabled in the wet conditions, Verstappen wasn’t able to find a way past.

Lap 18 saw contradictory reports coming in from drivers, Verstappen telling Red Bull he felt it was still too wet, while at the same time Sainz was informing Ferrari that it wasn’t too far from slick tyres. Neither Sainz or anyone else was willing to be the first to make the switch at that stage though.

Lap 21 and Alonso’s 350th Grand Prix ended prematurely as his engine died on him, leaving the Spaniard to coast to a halt on track bringing out a Virtual Safety Car and releasing Verstappen to move into P6. Russell, from P16, took the gamble and switched to slicks, putting on a set of mediums before embarking on a very slippy and slidey out lap.

Three laps into his slick tyre stint and Russell was into the 2:05s, only about seven seconds off the fastest of the intermediate times then but that improvement was halted when there was a brief yellow flag followed by another VSC when Alex Albon slid into the wall and left his front wing wedged in the barriers. The Williams driver made it back to the pits, but as with his teammate earlier, the team then decided to retire the car.

Just as the track went back to green, Esteban Ocon made it 0 for 2 on Alpines making it to the chequered flag in Singapore, stopping at T13 with oil and smoke seeping from his car. The VSC was once again deployed but no one felt confident enough to copy Russell’s lead with the slicks and racing was back on on lap 30.

Verstappen tried to anticipate the end of the VSC and get the jump on Lando Norris but got the timing wrong and passed the McLaren before the green flag which saw him have to slam on the brakes and fall back to P6 behind the papaya car.

Lap 33 saw another brief appearance by the yellow flags as Hamilton went into the barriers as he tried to make it past Sainz. The seven time champion was able to extract his car from the wall and get back into the race though he had lost a place to Norris and his broken front wing was sparking on track.

Gasly in the AlphaTauri was the second to move to the medium tyres and as he did, Russell started setting fastest laps times and so Leclerc was the first of the front runners to pit and ditch the inters though the Monegasque stopped long in his box which slowed his stop. Further back, Hamilton, Vettel, Mick Schumacher, Yuki Tsunoda and Kevin Magnussen also swapped to mediums, Hamilton also getting a new front wing, while Valtteri Bottas was the first to put the softs on.

At the front, Perez made his stop but was able to emerge still in the lead on lap 36 just as Tsunoda strightlined it into the wall and the Safety Car was once again deployed. The last two cars on the intermediates were the McLarens, in P3 and P5, and they took advantage of the Safety Car, which means you lose less time in the pit lane compared to the cars on track as they all have to lap much slower than usual, to make their stops with Norris emerging on P4 and Daniel Ricciardo in P6 on the softs.

The Safety Car departed the track again at the end of lap 39 and the majority of the drivers were then released to go full speed on the slicks for the first time today. Verstappen made a move on Norris for P3 at the restart but hit a bump as he pulled to the side which caused a massive lock up as he did and went straight into the run off. He rejoined but had to head to the pits as his tyres were flat spotted, and got back into the race in P14.

As that was happening Russell went into the side of Schumacher as he tried to pass the Haas, they both took some damage with the Mercedes puncturing its rear right. The two headed to the pits to swap to softs. At the front Perez, still in the lead, had been noted for a Safety Car infringement, while on lap 43 DRS came into play for the first time in the Grand Prix.

Leclerc was within the required 1 second and had DRS on Perez while Norris was also in range of Sainz for the two to fight over the final step on the podium. While the McLaren did drop just out of range of the Ferrari, at the front, Leclerc was piling the pressure on with both of the top two locking up and sliding around as they raced each other hard.

Lap 49 saw Perez get some breathing space as Leclerc went too deep into a corner and fell back over a second behind the Mexican. With just over ten minutes left to race, the stewards announced that they would be investigating Perez for a potential Safety Car infringement after the race.

With an investigation on the cards Leclerc was told to stay within 5 seconds of Perez, in case there would be a time penalty applied post-race, while Red Bull radioed Perez to say “Let’s disappear” at the front.

In the final few minutes of the race the big fight was for P7 with Vettel’s mirror’s full of both Hamilton and Verstappen as the two tried to make moves. While the Mercedes tried to get past the Aston Martin, he got offline onto the damp and made a mistake which opened the door for Verstappen to take P8 and start his own assault on Vettel.

Perez took the chequered flag just over 7.5 seconds ahead of Leclerc while Sainz came home in P3. It was a best team result of the season for McLaren with Norris and Ricciardo taking P4 and P5.

Lance Stroll was P6 while Verstappen got the better of Vettel on the final lap to snatch P7 the second Aston Martin driver. The final points places went to Hamilton and Gasly.