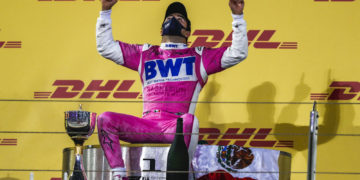 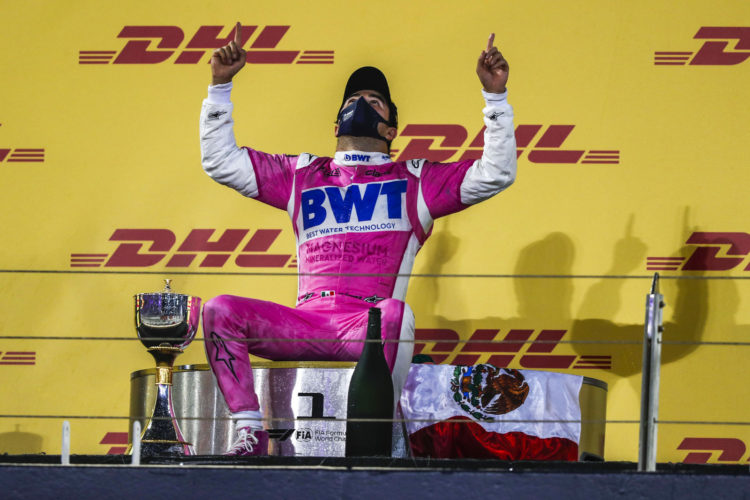 Sakhir Grand Prix – Racing Point’s Sergio Perez says he has dreamed for many years of the chance to say he’s a Formula 1 winner, and is speechless after making it a reality.

Sergio Perez is Formula 1’s newest race winner, having won at Sakhir in his 194th Grand Prix start. The victory comes just a week before Perez’ Formula 1 career possibly goes on hold, as he doesn’t have a confirmed drive for next season.

Perez, who has been racing in F1 since 2011, has had a tumultuous career since joining the sport. Initially part of the Ferrari Driver Academy when he joined Sauber, he was dropped by the FDA when he joined McLaren for 2013. Dropped by McLaren after just one year, Perez found refuge with Force India and spent a few years in the upper midfield with the team. Perez was instrumental in triggering the administration proceedings that forced the sale of the team from Vijay Mallya to Lawrence Stroll’s Racing Point in 2018, and has been the stronger driver for the team ever since.

Crossing the line to win in the Sakhir Grand Prix, having been facing the wrong way on the opening lap after being tipped into a spin by Ferrari’s Charles Leclerc, Perez was clearly emotional as he cried over team radio. Holding back tears while the Mexican National Anthem played on the podium, Perez said he couldn’t believe his moment has finally come.

“I’m a bit speechless. I hope I’m not dreaming, because I’ve dreamed for so many years of being in this moment.” Perez said. “Ten years it took me. Incredible, I mean… I don’t know what to say. After the first lap the race was again gone, same as last weekend. But it was all about not giving up, recovering and going for it, just making the best we possibly could. This season, the luck hasn’t been with us this year but we finally got it and I think we won today on merit. Yeah, the Mercs had some issues but in the end my pace was strong enough to hold George who did a fantastic race today.”

This one might take a while to settle in… just unbelievable 🙏pic.twitter.com/cMZKWqg7PA

Having pitted for fresh Mediums at the end of Lap 1 and to have his car checked over, Perez was essentially reset onto a one stop strategy but starting from the very back. Able to make quick work of those still on old Softs, his race slowly came back to life as the first stint played out. But the Mexican driver said that it wasn’t as smooth as it looked, literally, as he had severe vibrations during that phase of the race: “That first stint was pretty hard. We went onto a new set of mediums but I did a big mistake during the safety car. I locked up, warming up the brakes, I locked up badly the front left tyre and since that first lap of the race, I had so bad vibrations but it was hard to keep the steering wheel tight [in my hands].”

Perez ran more than five laps longer than Ocon and Stroll for that first stint, meaning his tyres were fresher when he resumed the track after his switch to Hards for the final stint. Showing great pace immediately, he was able to catch and pass both Ocon and Stroll on track, and thus was able to capitalise when Mercedes made their tyre blunders during the late Safety Car.

“There were times when I told the team that we should box I was losing lap time but still the pace was strong at that point but what I think what really made our race was to be able to go a bit longer than these two guys [Ocon & Stroll] and build up a bit of a tyre delta and then we came back strong and we managed to overtake them and I think we had good tyre life until the end, so well done to the team, because we understood quickly enough this Bahrain because it’s very different to the last one that we raced on, in terms of tyre usage, tyre energies, so we done on that, to the team, and nice recovery from last weekend.”