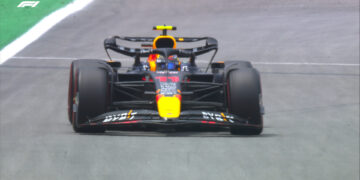 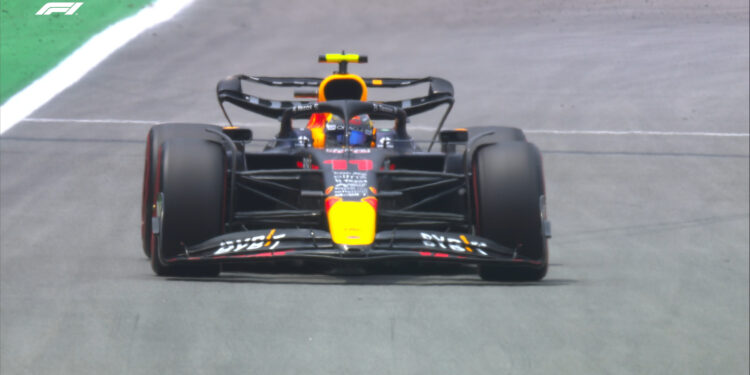 Sao Paulo Grand Prix – Sergio Perez’ best lap eluded the efforts of Charles Leclerc and Max Verstappen by a handful of thousandths of a second in Brazil.

Kevin Magnussen was the first to head out of the pits on an overcast Interlagos Circuit. With the final Sprint of the year taking place in Brazil, that means that this session is a very important one as qualifying will be coming up in a few hours.

The Aston Martin drivers returned to the pits after their out lap as the team always seems to do while Alex Albon was the last to emerge, a few laps after the rest.

The first time on the board was a 1:16.443 by Magnussen and after seven minutes, Max Verstappen was on top with a 1:14.104 on the hards, a time that was exactly equalled by Valtteri Bottas on the mediums.

There was some drama between Carlos Sainz and Lando Norris, as the speedier Spaniard came across the meandering McLaren and had to take to the grass to avoid him. Sainz reported back to his team that it was a dangerous situation and he had been reprimanded for doing less.

Norris’ participation in today’s track action had been unclear after he missed his media obligations yesterday with suspected food poisoning, and Nyck de Vries, who has been getting to experience many different cars throughout the season, had a seat fitting and was in line to replace him if the Brit hadn’t recovered enough.

A quarter of the way through the session it was still Verstappen and Bottas at the top of the times, both having improved but the Red Bull racer had shaved the time down to a 1:13.575 while the Finn was just over two tenths behind.

The track went very quiet just after twenty minutes had elapsed with all Nicholas Latifi having headed back to the pits. Sergio Perez and the Haas drivers were the first back out, with the Mexican jumping to the top of the timesheets with the first soft tyre lap of the session to set a 1:11.853. Mick Schumacher went into P2 just over 1.5 seconds behind the Red Bull driver with his first medium lap but Magnussen got two tenths closer to Perez while Verstappen took over as the sole Red Bull on track.

Just after the clock ticked past the halfway point of the practice, Verstappen, struggling with understeer, could only get within 0.008 seconds of his teammate while the track started to get busy again. The Dutch driver wasn’t the only one struggling, as Lewis Hamilton wasn’t getting any grip at the rear of his car while Lance Stroll felt something wrong with his car and had to head to the pits.

Despite Lerclerc and Verstappen’s best efforts they could get very close but just not topple Perez from the top of the times, the Ferrari racers ended 0.004 seconds off to sit halfway between both the Red Bulls.

Sainz took the chequered flag in P4 with a 1:12.039, just a thousandth of a second faster than Hamilton’s best. Russell was P6, while Sebastian Vettel was P7, 0.304 seconds off Perez.

Schumacher ended the session in P8 while Bottas and Pierre Gasly rounded out the top ten, the Alfa Romeo racer with a 1:12.466 while the AlphaTauri driver was, like Sainz and Hamilton, only one thousandth behind.

Neither Alpine, who ended P11 and P13, nor McLaren, P15 ad P20, used the soft tyres during the session so we won’t know until qualifying how they stack up against the rest of the grid.