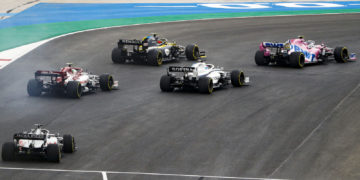 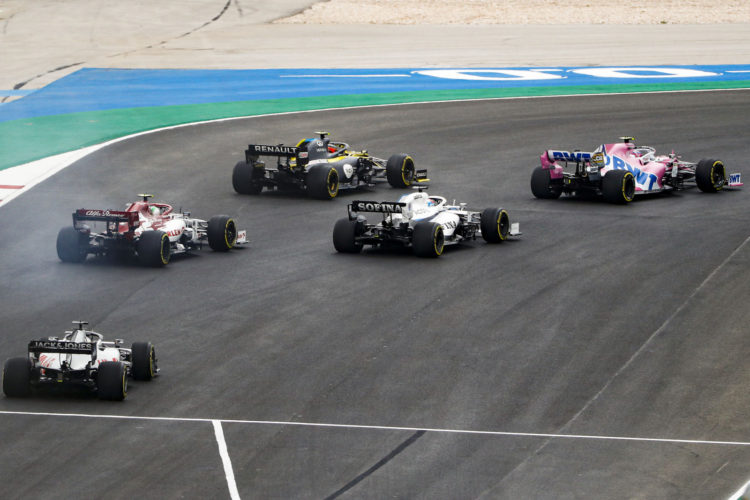 Portuguese Grand Prix – Racing Point’s Sergio Perez has been given a second season reprimand for his defensive swerve against Pierre Gasly in Portugal.

Sergio Perez had a very exciting race in Portimao. Having made a good initial getaway, Perez was fighting with Max Verstappen over P3 on the opening lap when the pair tangled. Verstappen’s right front wheel clipped Perez’s left rear, and this sent the Mexican spinning off and facing the wrong way. Picking up some minor damage, he was forced to pit and took on the Mediums for a long stint.

Perez showed great pace from there, and came out on track in P5 after pitting for the Softs with 25 laps to go. However, he didn’t seem to enjoy the Softs much and came under serious pressure from Alpha Tauri’s Pierre Gasly & McLaren’s Carlos Sainz.

Defending against Gasly, the pair both made the decision to swoop to the inside line on the run to Turn 1, luckily avoiding contact. Gasly was able to get past a lap later, while the stewards summoned both drivers before them to explain the incident. Gasly finished in P5, with Carlos Sainz also getting past Perez to demote the Racing Point to P7.

The stewards announced their findings afterwards, saying that the move had been ‘too close to the limit’ after the two drivers agreed that it was ‘fundamentally ok’. The stewards found that the move had been prior to, or simultaneous with, Gasly’s move to the inside, but Perez’ move could still be regarded as dangerous. He was given a reprimand, his second of the season. One more will trigger a ten place grid drop.

“When you consider how the race started, P7 is a very good result and we can be proud of the recovery.” said Perez afterwards. “The contact with Max [Verstappen] at the start was really unfortunate. The Mercedes at the front were struggling with the Mediums and Max was closing on them.”

“I saw that Valtteri [Bottas] pushed Max wide and then he came back onto the track too aggressively causing a collision. It was then made worse by having a puncture and having to stop on the first lap. I had to drive to the pits with a big vibration too.” continued Perez.

“We then ran a really strong stint on the mediums, which put us right back up towards the front, but the final stint on the soft tyres was tough. We probably lacked full knowledge of the soft – because the practice sessions were disrupted – and we weren’t able to protect against graining enough in the last stint, so [Pierre] Gasly and [Carlos] Sainz were able to get by at the end. Still, it’s some important points and we recovered well from being in last place after the first lap. I’m looking forward to racing at Imola next time out.”