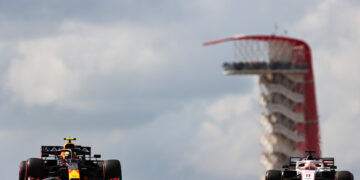 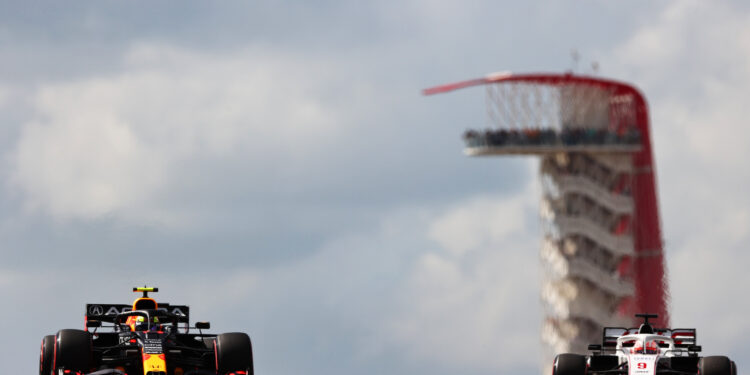 US Grand Prix – Red Bull driver Sergio Perez has set the benchmark ahead of qualifying for the US Grand Prix.

Perez’s time of 1:34.701 was just a tenth faster than second place man Carlos Sainz in the Ferrari. Red Bull teammate Max Verstappen was in third, a further tenth off. However the Dutchman could have gone quickest had his best time not been deleted for exceeding track limits.

As the light went green to start final practice before qualifying, Aston Martin’s Sebastian Vettel was the only driver to head out in the first few minutes of the session. With a new engine for this weekend, the German has plenty of mileage to use in order to get dialed in to the track.

The lull in the track action was broken as Alpine’s Fernando Alonso and Hamilton took to the track with after 15 minutes. Drivers were keen not to use up their tyre allocation due to higher than expected wear predicted for the race.

The yellow flags were brought out at the half way point for Bottas who lost the rear at the esses and spun his car. The Finn was able to keep the car out of the barriers and had to return to the pits for new tyres.

There was a heart-in-mouth moment for Williams driver George Russell who has a high-speed spin at Turn 5 when he lost the rear over the kerbs. Luckily the Briton was able to avoid damage and recovered back to the pits.

As the drivers started their final qualifying preparations, Verstappen did go fastest, but had his 1:34.383 time deleted for running wide and exceeding track limits at Turn 19.

Moments later, Mercedes driver Lewis Hamilton had a laptime deleted for exceeding track limits at Turn 9. His time of 1:34.458 was a tenth slower than Verstappens however.

Pierre Gasly set the seventh fastest time in the AlphaTauri with seven time world champion Hamilton in eighth, having had his best time deleted.

Charles Leclerc was down in eighth in the other Ferrari, but again had a laptime deleted for exceeding track limits.

Esteban Ocon rounded out the top ten for Alpine with a time a full second off the leader.