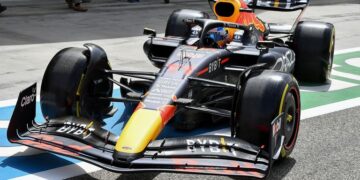 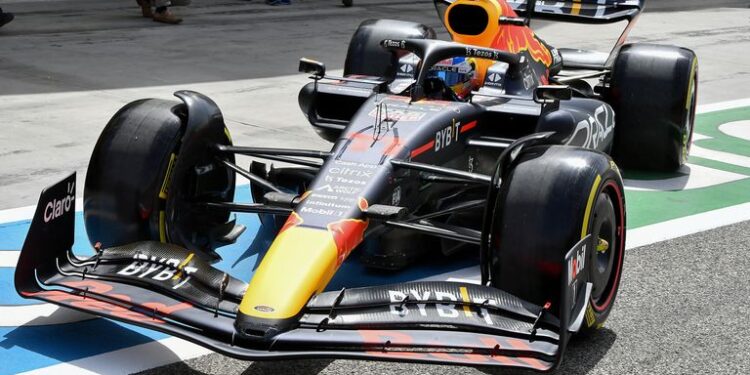 The final day of pre season testing saw improved conditions for the teams, the overcast sky and sandstorms giving way to glorious blue sky.  At the green light Haas had already been touring the circuit for an hour, utilising the extra time allowed after the team had issues getting their freight to the track.

There was a small flurry of activity at the start of the session, with Ferrari, Alpine, Alfa Romeo and AlphaTauri all heading out for short runs.

The morning session saw some of the teams trying new parts on their cars, with Alpine running a new front wing, while Aston Martin focused on aero data gathering, an enormous rake covering the back of their car before returning to short runs.

The anticipated upgraded Red Bull was locked away behind screens for most of the first hour, leaving the garage to watching eyes as the rumours of an updated car proved to be true. Running with new sweeping sculpted sidepods, Perez immediately went fastest on his first flying lap with a time of 1:34.733.   Perez and Zhou then swapped the fastest lap over the next hour, as Zhou made the first of several appearances at the top of the timesheets.

It was all eyes on Red Bull this morning, as Sergio Perez emerged from the garage with some very different looking sidepods on his car to what we saw on the first two days 👀 pic.twitter.com/ivA6fYfouw

Mclaren once again ran without Daniel Ricciardo following his positive covid result. The team finally had some positive running in Bahrain, with new brakes arriving for the team. Lando Norris topped the timesheets early in the first hour with a time of 1:36:504, before being beaten just before the two hour mark by Carlos Sainz. Running two separate new front wings and a new floor, McLaren were slowly building up their running as the morning progressed. Norris still could not do more than 12 consecutive laps before returning to the pits however.

Williams had a more positive morning after their fiery exit from yesterday’s test, the issues with the rear of the car resolved. Latifi was back in the car, given additional time after losing most of the second day. Albon will will resume testing duties for the afternoon.

Haas had an extra hour’s running at the circuit before the other teams,  after issues with their freight arriving in time for day one of the pre season test. Kevin Magnussen’s running was interrupted by a water leak, keeping him in the garage for much of the second hour. The team quickly resolved the problem, and was back out again. The Dane only spent a couple of laps on track before spending majority of the rest of the session back in the garage.

The track became quiet as the session progressed, with no more than five or six cars at a time out on track at a time. The teams were working on individual programmes before returning to the pits after ten or so laps.

Ferrari with just under 90 minutes to go, had the car raised on the jacks and the floor off, before sending the car back out for more short runs. Once again looking composed and well balanced, Carlos Sainz finished the session in fourth with a time of 1:34.905.  Charles Leclerc will take over testing this afternoon.

There was racing action as the last hour of the morning approached, between Lewis Hamilton in the Mercedes and Pierre Gasly in the AlphaTauri. Both used DRS to overtake the other before Hamilton pulled off into the pits. The action provided a good indication of the ability of the cars to follow each other closely, which was a visible improvement from last season. Hamilton finished the session in 8th place in another understated session for the Mercedes team.

Perez’s time set at the end of the first hour was never beaten, completing 43 laps across the session as he topped the times. Zhou Guangu finished the morning in second, 0.854s behind on 62 laps. Gasly rounded off the top three, having completed the most laps of the morning at 91.

With 35 minutes to go, McLaren opted to stay in the garage until after the break to focus on their continuing brake problems, while the other teams completed their programmes.  Norris completed a total of 39 laps in  the morning session.

No mechanical gremlins on track meant no red flags causing any stoppages, so the FIA once again tested their procedures as the morning drew to a close bringing out the red flag just before the end of the session.  When the session resumed with only a handful if minutes left, some of the cars lined up for a practice standing start. The first start was aborted, the test complete after a second formation lap which saw Pierre Gasly in the pole position grid slot.