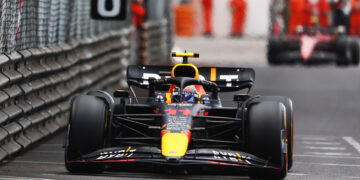 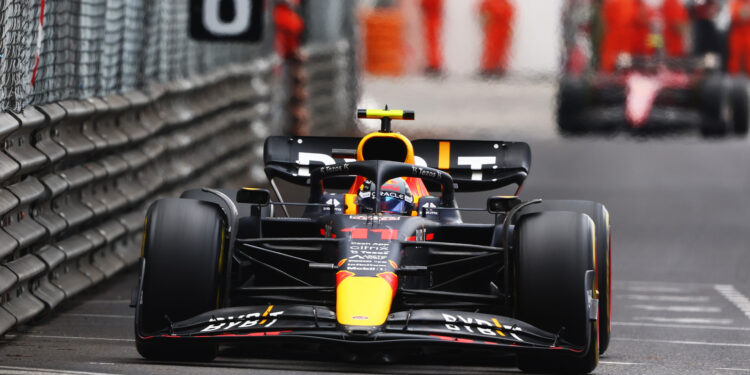 Monaco Grand Prix – Sergio Perez has taken his maiden Monaco win after beating Ferrari on strategy and holding off pressure at the end.

Just as the drivers were getting ready to hop into their cars there was a short, heavy shower, which drenched the and as everyone was getting ready for an exciting wet start, the start procedure was suspended and everything delayed for 10 minutes before heading on the formation lap behind the Safety Car.

While the rain had stopped, all cars were required to put on the full wets due to the Safety Car start, which meant that the interesting mix of strategy tyre choices before that, where the majority had chosen the intermediates, but there had been a few who had chosen the blue ringed full wets.

A couple of minutes before the delayed start should have gotten underway more heavy rain arrived and so the formation lap was pushed further back, to sixteen minutes past the hour. Once the cars finally got off the grid behind the Safety Car, another downpour started and the drivers were reporting in that it was too wet, much worse than had been expected.

The cars completed two formation laps before the red flag was flown, all cars returned to the pit lane and a sea of colourful gazebos popped up to shelter the cars as the rain once again started to peter out. There was no information from Race Control about when the cars might get back on track while multiple more showers came and went.

55 minutes after the race should have gone green and there was finally a message from the officials, that the race would be starting in 10 minutes, behind the Safety Car. That kicked the pitlane back into chaos mode as drivers ran back from garages to their cars while mechanics hurried around with tyre trolleys and cleared the gazebos away.

It was not an uneventful first lap back on track as Nicholas Latifi went into the barrier at the hairpin, reporting on team radio that his Williams just wouldn’t turn, while Lance Stroll also brushed the barriers and gave his Aston Martin a right rear puncture.

At the front, after two laps with the Safety Car, there was a rolling start and Charles Leclerc finally got to lead the field around his home track after failing to start last year’s race after qualifying on pole and then all the delays he had to wait through this time out.

Pierre Gasly, after having missed out on making it to Q2 thanks to the red flag at the end of the opening part of qualifying, decided there was not much to lose by swapping to intermediates after a few laps. The AlphaTauri did not look overly comfortable for the first few laps but once he had the feel of them, the Frenchman was putting in times similar to those of the front runners and five seconds faster than the drivers on the wets around him.

Five of the last six drivers on the track had swapped to the green ringed tyres, Gasly who had made it to P15, Sebastian Vettel, Mick Schumacher, Yuki Tsunoda and Latifi. Stroll in P19 was the only one in that group on the full wets. Once Gasly had caught up to Zhou Guanyu, despite the pace advantage he had, it took quite a few laps before he was able to get past the Alfa Romeo after pushing the Chinese driver into making a mistake and straight-lining the Nouvelle Chicane.

It didn’t take long for Gasly to be on the gearbox of Daniel Ricciardo, and the Frenchman made much quicker work of the McLaren, slipping past into P12 around the swimming pool and putting in fastest laps close up to his next victim, Kevin Magnussen.

On lap 16 the first of the top ten swapped to the inters, with Lewis Hamilton pitting from P8 and rejoined after only losing one position. Red Bull copied that move the following lap with P3 driver, Sergio Perez making the tyre change and rejoining behind his teammate and Lando Norris. Ferrari’s Carlos Sainz was called in to do the same but argued back that he would prefer to stay on track until he could make the move to dry tyres.

Lap 19 saw Hamilton and Esteban Ocon clashing into Sainte Devote as the Mercedes tried to move past the Alpine for P8, the two continued and their battle raged for the following few laps. Later in the race Ocon was handed a five second penalty for the collision. At the front meanwhile the race leader, Leclerc and Max Verstappen both made the move to intermediates. The earlier stop however played out perfectly for Perez as he undercut Leclerc and was quickly closing on Sainz who was in the lead as he hadn’t pitted yet.

On lap 21 Sainz made his stop and was the one of the first to swap to dry tyres as he put on the hards. Leclerc followed his teammate into the pits, being told too late to stay out, and also swapped to the hards but was furious about the decision. The two Red Bulls copied the move the following lap and as they rejoined it was Perez who had retained the lead, Sainz was in P2 with Verstappen having made it out in P3 ahead of the polesitter Leclerc.

The majority of the field then moved to the dry compounds while Sainz closed up to Perez and had a massive moment on the start-finish straight which caused him to fall back but it could have been much worse had he not managed to save it. While it was all looking Red Bull on track, it might not all be smooth running for them as both Verstappen and Perez were being looked at for pit exit incidents.

While Magnussen had retired just before the swap to dry tyres, the second Haas had a huge crash heading into the swimming pool chicane which left the rear of Schumacher’s car breaking off from the survival cell. The German was unharmed and able to get out of the car by himself but it unsurprisingly led to the Virtual Safety Car and then the full physical Safety Car pretty soon after so that the marshals could clear the very worse-for-wear car.

Lap 30 saw the return of the red flag to allow repairs to be made to the barrier that Schumacher had heavily crashed into. The race was set to resume behind the Safety Car at 16:15, two hours and fifteen minutes after the race was officially scheduled to get underway. As the cars returned to the track, while there were 47 laps of the 77 to race, there was less than an hour of time left to complete them so while there wouldn’t be time to complete all of them, they needed to get to at least lap 58 in order for full points to be awarded.

All cars returned to the track with the Red Bulls having changed to the medium compound while Ferrari stuck with hards, as tyre changes are allowed under red flag conditions, and after a couple of laps behind the Safety Car, to allow the cars who had been lapped to get back onto the lead lap, the race was back underway with Perez in the lead.

In the dry, the race resumed as more traditional, processional Monaco affair, after having lapped incredibly slowly and dropped back over 50 seconds in the twenty laps following the restart, seventh placed Alonso then decided to put in the fastest lap of the race.

While Alonso was doing that, Perez, who had been three seconds ahead of Sainz at one point, had lost that lead as the Ferrari driver saw a chance to potentially take his first ever race win and had closed into DRS range, with the time closing in on ten minutes to go.

The top four were all line-astern each within a second of each other in a DRS train, with Sainz almost going into the back of Perez at the hairpin and it was clear to see that the Spaniard was giving it his all in pursuit of the victory but the Ferrari driver fell back a little on the final few laps and was under pressure himself from Verstappen in P3.

Leclerc finally managed to finish his home race, but after starting on pole and having a very strong opening part of the race, he will be incredible disappointed by the strategy that Ferrari decided on today.

George Russell once again got the most out of his Mercedes, taking another top five finish, indeed he has only finished between P3 and P5 this season. Norris brought his McLaren home in P6 and given he was so far ahead of Alonso in P7, he was able to take a free pit stop and snatch the fastest lap, a 1:14.693, away from the Alpine driver, who had set a 1:15.882.

Hamilton took the chequered flag in P8 ahead of his ex-teammate Valtteri Bottas who once again brought his Alfa Romeo home in the points while Vettel rounded out the top ten for Aston Martin.