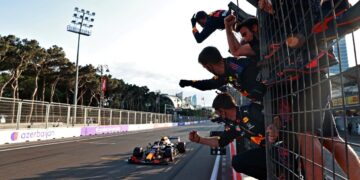 Sergio Perez has won the Azerbaijan GP after race leader Verstappen crashes out with a tyre failure. 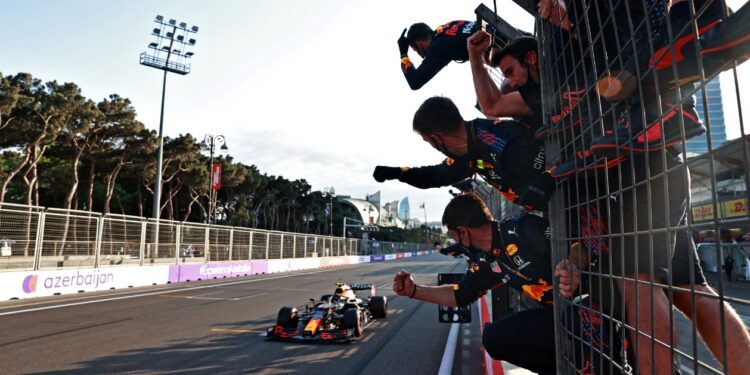 Red Bull looked set to cruise home to a 1-2 finish, however Verstappen’s rear left tyre suffered a high speed puncture on the pit straight sending his RB16B into the wall. This brought out the Safety Car which eventually got converted into a red flag.

With just three laps remaining, all eyes were on Perez and Mercedes’ Lewis Hamilton with a sprint to the finish. When the cars started again, Hamilton’s brakes looked visibly hot, and on the run down to the Turn 1, the Mercedes speared on into the runoff gifting Perez the win. Hamilton eventually finished down in 15th.

Driver of the day Sebastian Vettel finished in second place giving Aston Martin their first podium in Formula 1, with an impressive Pierre Gasly finishing in third for Alpha Tauri.

The two championship contenders Hamilton and Verstappen successfully navigated polesitter Charles Leclerc in the Ferrari early in the race with the duo running in first and second early on. Perez eventually got past the Frenchman for third a few laps later.

Esteban Ocon become the first retirement as the Alpine driver had a sudden loss of power out on track. He came back into the pits and parked up, his afternoon over.

With a flurry of pitstops, drivers switched over to the hard tyres. Ferrari’s Carlos Sainz had a moment down at Turn 8 going straight on into the runoff area. The Spaniard had to reverse back onto the track bringing out the yellow flags.

Hamilton came into the pits on Lap 12 but had a slow stop due to an approaching Gasly blocking his exit in his pitbox. As a result, Verstappen jumped the Mercedes driver in the pits. Perez also managed to come out ahead of Hamilton, but narrowly missing out on the lead due to a slower stop.

On Lap 31, Aston Martin’s Lance Stroll suffered a tyre blowout and he crashed his car on the pit straight. The Canadian driver was unhurt but the incident brought out the Safety Car.

The pitlane was closed for a few laps and opened up again on Lap 35 which saw a handful or drivers swap for fresh tyres. The front runners elected to remain on their older hard tyres and, when the racing resumed on Lap 36, the top three positions remained unchanged.

Vettel made a bold move on Leclerc for fifth place and, a lap later, passed Gasly to move up into fourth.

With just a handful of laps left, Verstappen suffered a similar crash to that of Stroll and went hard into the well. This brought out the Safety Car which turned into a red flag, having been suggested to the FIA by Red Bull.

With drivers able to change tyres and repair any damage, the race went underway again for a standing start with just two laps remaining. In a spectacular dash to the finish, Hamilton locked up into Turn 1 which allowed Perez to take the win.