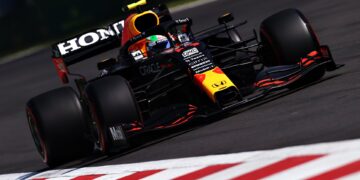 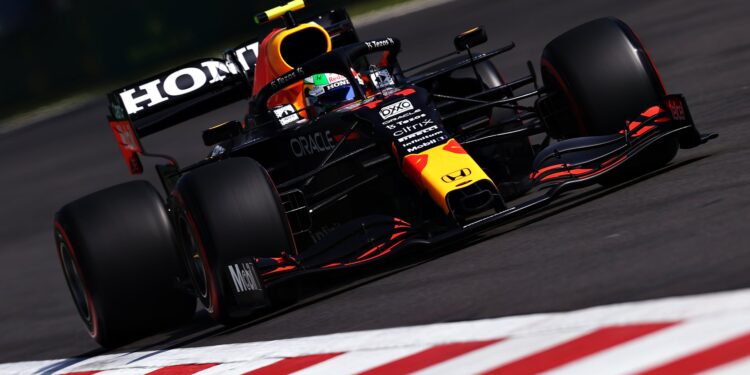 The Mexican driver set a time of 1:17.024 which was nearly two tenths faster than his teammate Max Verstappen behind. Mercedes Lewis Hamilton was in third, some six tenths slower than Perez’s benchmark.

Prior to the session, some dropped oil at Turn 4, Turn 7, and Turn 8 meant that the yellow and red ‘slippery track’ flags were waved at those corners for the first few minutes. This caused a few issues with several drivers, including Ferrari’s Carlos Sainz, sliding around on the slippery surface.

Having been in the news before the session due to taking a new Mercedes powerunit, McLaren’s Lando Norris took the early lead setting a 1:19.244. This was immediately bested by both Mercedes drivers with Valtteri Bottas setting a 1:18.661, a tenth up on his teammate Hamilton.

As the circuit ramped up, Ferrari’s Charles Leclerc set the fastest time with a 1:18.213. The time was less than two hundredths faster than Daniel Ricciardo in the McLaren behind.

However, there was no stopping Perez who set a 1:17.537 in front of his home crowd to go top. The time was beaten a lap later by teammate Verstappen who went quickest by four tenths.

In the second half of the 60-minute session, Mercedes started to come back at Red Bull with Bottas setting a 1:17.708. That was enough to get into second place, but was still 0.171s behind Verstappen. The Dutchman improved his time a minute later going almost half a second clear of the Finn.

In the second round of qualifying simulations, Red Bull came out on top again with Verstappen getting the better of his teammate and the two Mercedes drivers. The Red Bull cars were half a second clear of Hamilton and Bottas in third and fourth.

With minutes to go, Perez had the local crowd on their feet as he crossed the line to post the fastest time of the session so far. The 1:17.024 was good enough to put the Mexican on top, almost two tenths clear of his teammate behind.

Bottas, who was fastest on Friday morning, was in fourth, less than a tenth slower than his teammate.

Ferrari continued their good form with Carlos Sainz setting the fifth fastest time, ahead of Yuki Tsunoda in the AlphaTauri.

Daniel Ricciardo was in seventh for McLaren with Pierre Gasly in the other AlphaTauri in eighth.

Charles Leclerc set the ninth fastest time in the second Ferrari, with Norris, who will take a grid penalty for the race, rounding out the top ten.