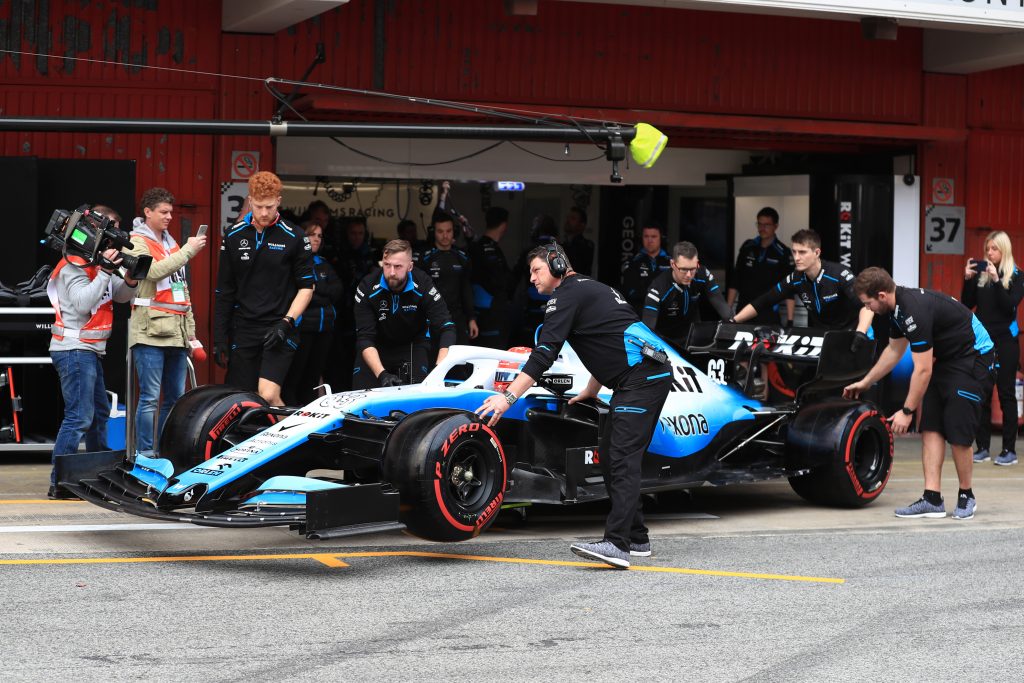 Picture Perfect In F1 Testing: The Story Behind The Moment

Picture Perfect In F1 Testing: The Story Behind The Moment

Out of the hundreds of pictures she took over the course of the first test in Barcelona, we asked F1 photographer Leanne Boon to pick out her favourite from the four day at Circuit de Barcelona-Catalunya.

In the first of a regular feature for 2019, Leanne Boon from Octane Photos sat down in Barcelona to have a chat with Thomas Maher about her favourite pictures from the entire test. Having spent the four days loitering around the pitlane, out on track and wandering the paddock, she had a huge choice of pictures to choose from.

In the end, Leanne couldn’t quite nail it down to just one picture. There were two moments that she felt were the most powerful, and she was there to witness both of them. The first was during the afternoon of Day 3, when the Williams team finally got their FW42 fired up in front of their garage and sent George Russell out on track to do a single installation lap. The whole team were there, and Leanne describes the moment that she’d spent ages waiting to capture:

“Williams was running for the first time this year and the media was just standing around waiting for them. We were waiting for the car to be rolled out of the garage and you can see Claire Williams standing pensively in the background. All their faces are all very very tense, which is so clear. And you can just about see Paddy [Lowe] in at the very back. There was a sense of weight to the moment.”

“You could feel the tension and the importance of the moment. The fans in the grandstand opposite all waiting, especially for Robert Kubica. They were waiting for him to come out, which didn’t happen until the next day, but they were still happy to see his team come out at last, even if it was Russell in the car at that moment.”

The second moment came during the morning of Day 4. Having faced down the press, Claire Williams had spoken about the team needing to wait for parts to arrive to properly put their FW42 together and begin their aero program. Robert Kubica, for the first time since 2011, strapped himself into his own car, equipped with aero measuring devices. Then, with a raft of photographers and television cameras waiting outside and needing to part like the Red Sea, Kubica peeled out onto the track and began Williams’ pre-season properly.

“If I had to choose which picture I prefer from the two, I’d say it’s this one as you can see how eager the media were, all the cameras pointing at the garage. There were even more behind me at the moment.” Leanne explained.

“These pictures are a big moment, considering it’s Williams we’re talking about and how big they are and to not have a car ready for testing….that’s never happened while I can remember.”

“I think the Kubica picture was actually the more tense occasion of the two, as they were waiting overnight for parts to arrive and this is where their proper serious testing begins. There was a sense of relief for the shakedown runs with George, but the pressure is on with the Kubica picture. Russell’s car wasn’t even fully painted in some places and you could see it when you were up close and behind the wheels wasn’t fully completed. ”

“As a team, I’m sure they’d rather not record this moment and would want everyone to forget about it and let them get on with getting the car ready for Melbourne. But that’s not the way things work.”

“It’s nice to see Robert back and the Polish fans are here in force. Last year in Budapest, they were singing when he came out onto the track. Despite being an F1 photographer for eight years, this is the first time I’ve seen him as a proper competitor. I started in F1 just after his accident and I’ve never seen him properly in an F1 car and I’ve always had a soft spot for him, even if I’m not someone with a favourite driver. Getting to see the moment he returned to F1 was just a bit…wow. You just want him to do well, and I hope the team are able to give him a proper car.”