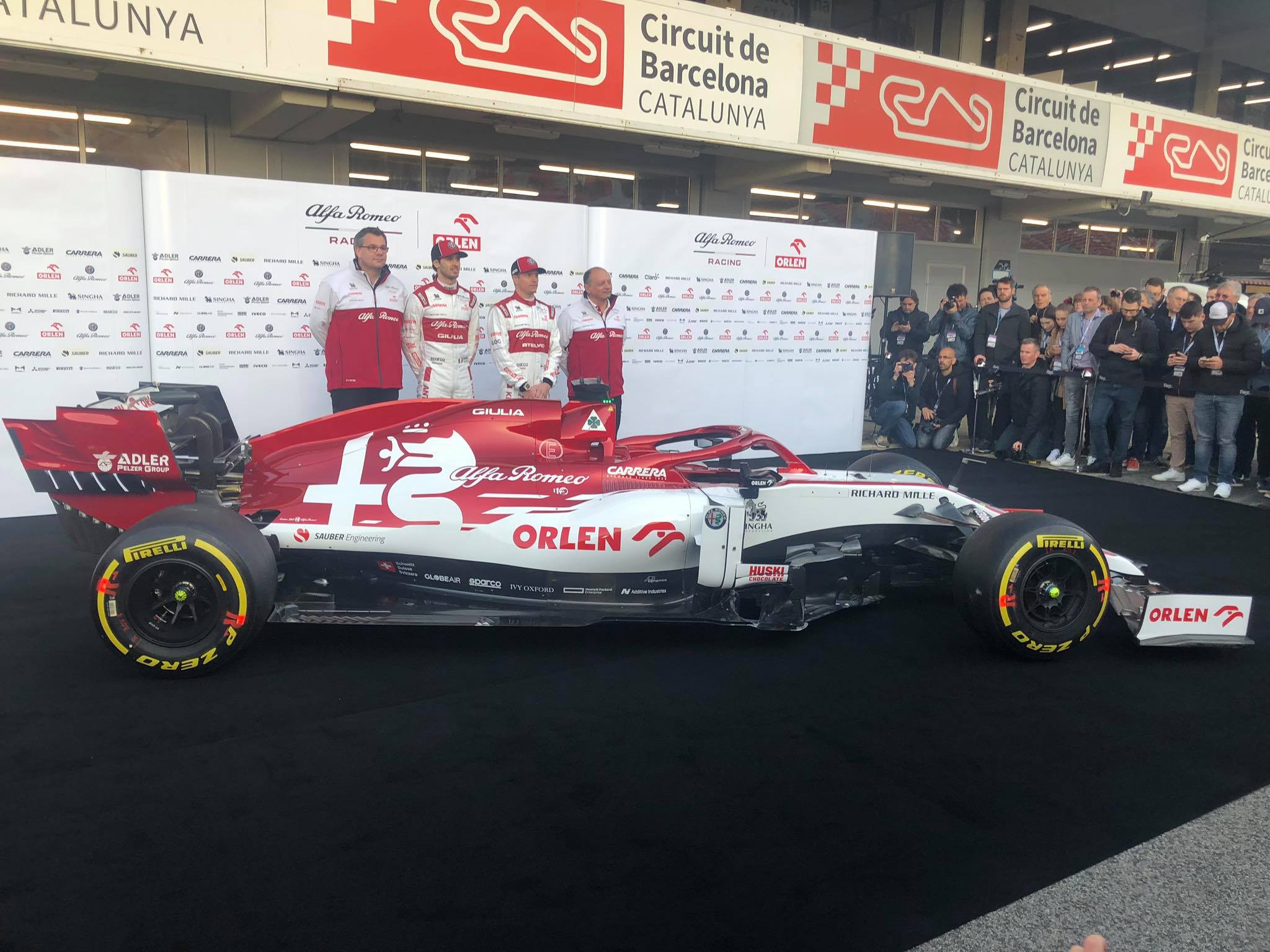 Alfa Romeo have revealed their new car, the C39, in the Barcelona pitlane just ahead of pre-season testing beginning.

Race drivers Kimi Räikkönen and Antonio Giovinazzi, alongside reserve driver Robert Kubica and development driver Tatiana Calderon, pulled the covers off the Alfa Romeo C39 during a roll-out presentation in the pitlane at the Circuit de Barcelona-Catalunya. The livery, developed in close cooperation with the Centro Stile Alfa Romeo, features the iconic red of Alfa Romeo, with scarlet stripes now extending all the way towards the front of the chassis. ORLEN logos adorn, among other locations, the sidepods and the rear wing. Overall, it’s a strong design that pays tribute to the Sauber Motorsport tradition – on the 50th anniversary of the team’s foundation – and to the team’s partners.

Designed and developed under the coordination of Technical Director, Jan Monchaux, the Alfa Romeo C39 bears just passing resemblance to its predecessor: it is, instead, a completely new concept aimed at helping the team build on the strong steps made in the last two years and continue its progress towards the front of the grid.

The focus now switches to the crucial two weeks of testing in Barcelona. With just six days of on-track action ahead of the season opener in Melbourne, Australia, every hour of activity in Catalonia will be key to understanding the new car and extracting its potential.

For the time being, though, we can enjoy the looks of the Alfa Romeo Racing ORLEN C39. It really brings truth to the old adage of saving the best for last.

Frédéric Vasseur, Team Principal Alfa Romeo Racing ORLEN and CEO Sauber Motorsport AG: “The C39 is the product of the hard work and vision of a large group of highly committed individuals and it’s testament to the quality of everyone in our team. We hope it will help us move the team forward and achieve our objectives. Our target hasn’t changed: we want to do a better job tomorrow than we did today. We are a growing team and still have to improve in every single area and every single department of the company. This is an open-ended project, there is no finish line – everyone has to be fully focused and dedicated. We are moving forward, we already did a huge step compared to where we were at the beginning of 2018 but we have to continue on this path.”

Jan Monchaux, Technical Director Alfa Romeo Racing ORLEN: “The C39 is a natural evolution of last year’s car, even though it doesn’t share a lot with its predecessor. We have been further improving our car but, apart maybe rims and tyres and some internal components, there is barely a single visible part that is the same. It’s the usual process of constant improvement, but it’s a brand new beast. We expect to improve on what we achieved last season, to make a step forward and hopefully be able to fight for the position at the top of the midfield.”