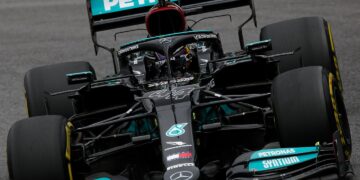 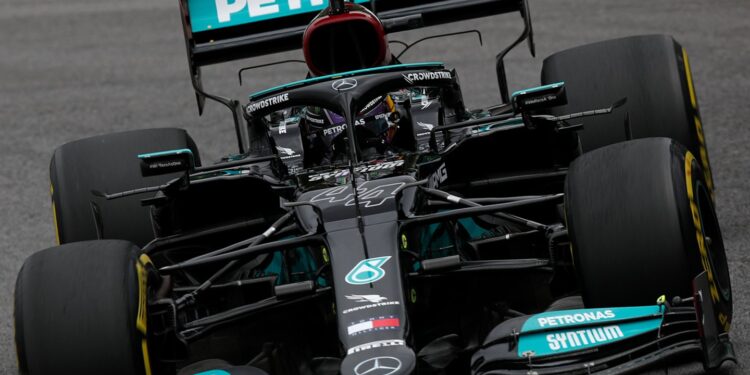 The Briton, who will take an engine penalty for this weekend, set a time of 1:09.050 which was nearly four tenths faster than Red Bull’s Max Verstappen. Red Bull teammate set the third fastest time, a further tenth behind. Valtteri Bottas was in fourth, half a second off Hamilton’s time.

Click here to view the full results from Free Practice One.

In gloomy the final Grand Prix weekend of the season involving a sprint, drivers had little time to spare as practice time had been reduced by one hour.

With qualifying happening later on Friday afternoon, as well as parc ferme conditions being introduced at the end off the session, drivers focused on set up and dial in for much of the hour.

After the first timed runs, Red Bull lead the field with Verstappen almost six tenths clear of his teammate Perez in second place. The Dutchman’s time of 1:10.189 was almost six tenths faster than the Mexican’s.

Championship contender Hamilton was 0.8 seconds adrift of Verstappens benchmark as the Mercedes team dialed the car into the circuit and ensured the Briton’s new Mercedes engine was working well.

At the mid-point of the session, there were reports of some wet weather arriving at the circuit. Aston Martin’s Lance Stroll reported “drizzle” over the radio making the track surface slippery.

Verstappen extended his average at the 25 minute mark with a 109:417. However his teammate Perez was nipping at his heels with a time that was just 0.075s off the Dutchmans’.

Valtteri Bottas got up to speed by going into third place with a 1:09.867, however the time was still nearly half a second off the Red Bull’s pace. Hamilton set a 1:09.768 moments later, three and a half tenths off the benchmark.

With just over ten minutes to go, Bottas crossed the line with a time that was just a tenth off Verstappen’s time and will come as a boon for Mercedes who looked off the pace throughout the session. However that was bested by Hamilton who went to the top of the timesheets with a 1:09.348, just half a tenth faster than Verstappen.

Hamilton set the timesheets alight with three minutes to go with a 1:09.050, extending his advantage from Verstappen to 0.367s.

Pierre Gasly set the fifth fastest time in the dying embers of the session for AlphaTauri, ahead of the two Ferrari’s of Carlos Sainz and Charles Leclerc.

The two Alpine cars were in eighth and ninth with Esteban Ocon getting the better of Fernando Alonso. Lance Stroll rounded out the top ten for Aston Martin.