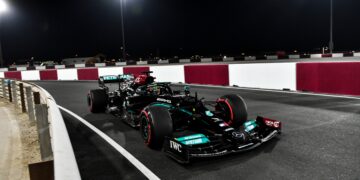 Hamilton cruises to Qatar GP pole ahead of Verstappen

Hamilton cruises to Qatar GP pole ahead of Verstappen 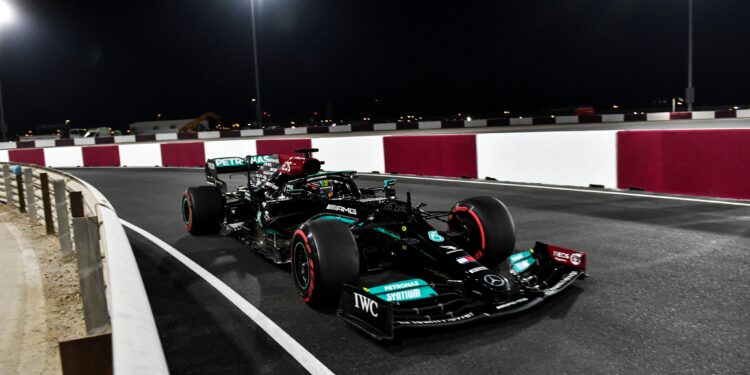 Qatar Grand Prix – Mercedes driver Lewis Hamilton will start on pole for the Qatar GP after setting a time half a second clear of second placed man Max Verstappen in the Red Bull.

Hamilton’s time of 1:20.827 saw him the only man to reach the one minute 20 seconds mark with teammate Valtteri Bottas starting in third place, close behind the Red Bull.

In the first runs, Hamilton was the early pacesetter after setting a 1:22.019 – two tenths faster than championship rival Verstappen. Interestingly, McLaren’s Lando Norris set the third fastest time from Bottas in fourth. The Finn had been setting the pace in practice, but was unable to match his teammate in his first run.

There was brief drama as the front wing on Mick Schumachers’ Haas appeared to fail as it dragged along the track surface creating spectacular sparks in the darkened circuit.

In the second runs, Bottas popped up into first with a 1:22.016 – just 0.003s of Hamilton’s time in second. Fernando Alonso caught the paddocks’ attention with a laptime that was good enough for fourth place.

In the closing stages of the session, Verstappen pipped Bottas with a 1:21.996 – and the first driver to break into the 1:21 mark. Alpine’s Esteban Ocon returned to the pits complaining of vibrations in his car when he hit the brakes.

As the lights went green for Q2, it was Williams driver George Russell who broke the silence on the track and was first out.

The medium tyres were the compound most favoured by the teams intending to start the race on the harder tyre.

After the first runs, Hamilton laid down the marker with a 1:21.682, some three tenths clear of a surprising result of Pierre Gasly in the AlphaTauri. The Frenchman did set his time on the soft tyres however.

Verstappen set the third fastest time, just three tenths off Hamilton, with Bottas just 0.007s further back in fourth. Sergio Perez in the other Red Bull was unable to make a mark amongst the soft runners and was down in 12th place.

With the pressure mounting, several drivers switched from the medium to soft tyres, including McLaren’s Lando Norris, Daniel Ricciardo, Perez, and Verstappen. The Dutchman abandoned his soft tyre lap, but the biggest shock was Perez who was knocked out in Q2. The Mexican driver missed out on a top ten shootout start by just one tenth.

The drivers knocked out in Q2 were: Perez, Aston Martin’s Lance Stroll, Leclerc, Ricciardo, and Russell.

In the top ten shootout, first blood went to Hamilton who pipped his teammate by two tenths with a 1:21.478. Verstappen’s answer was a 1:21.424 which was a tenth and a half off Hamilton. The Dutchman was sandwiched in between the two Mercedes cars in second place. Gasly continued his strong performance for fourth, with Alonso impressing in fifth.

In the final runs, it was Hamilton first out on track, and fellow championship contender Verstappen the last out to set a lap. Hamilton crossed the line and was the first driver into the 1:20’s with a 1:20.827 to cement his provisional pole position.

However, Gasly took a puncture and limped down the pit straight, but the yellow flags weren’t brought out. It looked as though the AlphaTauri driver hit a kerb and the front wing tore the front right tyre.

Verstappen improved, but it was not enough to challenge Hamilton. Bottas set the third fastest time ahead of Gasly. Norris improved to go up into sixth place ahead of Sainz in seventh. AlphaTauri’s Yuki Tsunoda finished in eighth ahead of Ocon in ninth. Vettel rounded out the top ten.