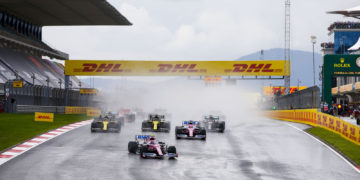 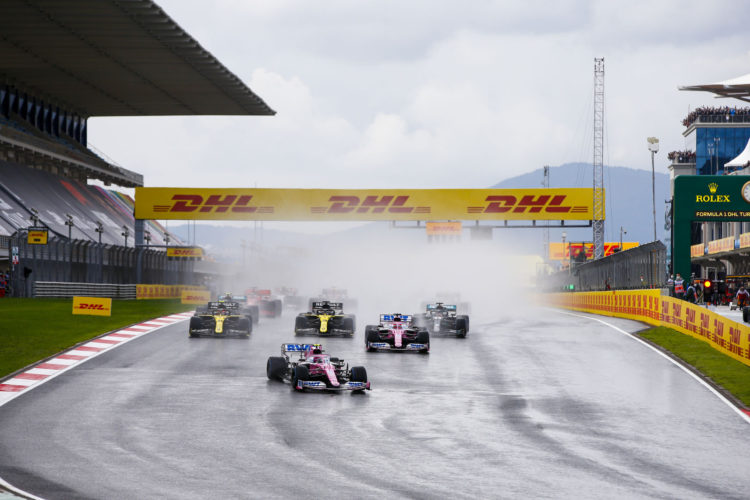 The Canadian controlled the early stages of the race, coming out of the first round of pitstops with a ten second lead over teammate Sergio Perez. However, Perez slowly started catching him during the second stint. Racing Point initially wanted to try holding off as long as possible as the possibility of a switch to Dry compound tyres was there but, ultimately, the team brought Stroll in for another set of fresh Intermediates.

It proved catastrophic for Stroll, as he simply had no grip in his final stint – so much so, that Racing Point didn’t bring Perez in to do the same. Complaining of graining on his tyres, Stroll fell down the order and finished P9 while Perez finished P2.

Racing Point have since explained that they have discovered damage that was unknown during Sunday’s race, but explains why Stroll suffered so badly in the second half of the race.

“During the team’s routine post-race car set down, we discovered damage to the underside ofLance Stroll’s front wing that was a significant contributor to the graining issues he experienced during his 2nd and 3rd stints on the intermediate tyres at the Turkish GP.”


“Lance reported poor tyre performance, significant understeer and graining from lap 17 onwards in the race. Pitting for a fresh set of intermediates on lap 36 failed to resolve the problem, with the graining becoming even more severe. One of the strakes on the underside of the front wing had come loose and lodged itself in such a way that the blockage caused a significant loss of front downforce. The resultant loss of front downforce contributed to increased levels of graining.”


“Data during the race confirmed there was a significant loss of front downforce – but with no visible damage to the top side of the front wing, combined with the low-grip conditions, it was difficult to confirm whether the data was correct.”

“It was only after the race, when the car returned to the garage, that the damage and blockage to the underside of the front wing was discovered.”