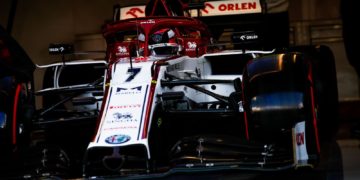 Raikkonen annoyed after being held up in Q1

Raikkonen annoyed after being held up in Q1 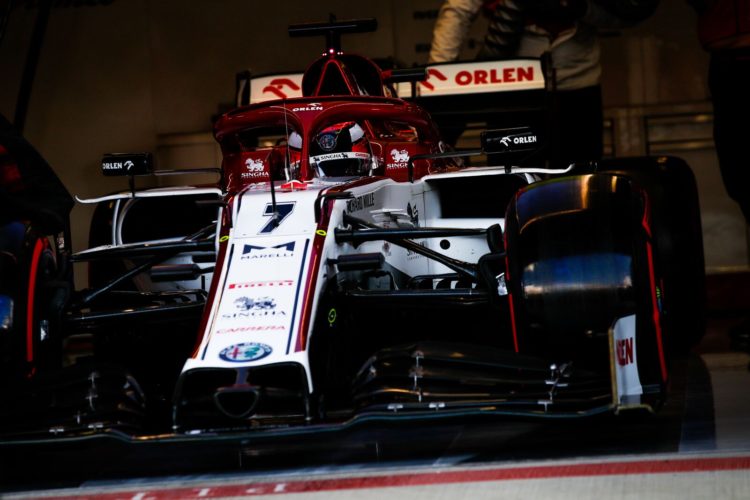 British Grand Prix – Kimi Raikkonen was left annoyed after being baulked on his Q1 flying lap, but Alfa are relatively optimistic despite their low grid slots.

Alfa Romeo line up in P17 and P18 for Sunday’s British Grand Prix with Antonio Giovinazzi and Kimi Raikkonen respectively.

The C39 has struggled throughout the season so far, with just two points scored by the team in 2020 thanks to Antonio Giovinazzi’s P9 in Austria. However, there has been some slight hints of improvement this weekend with some aerodynamic updates brought to the car. Rather than being the outright slowest, both Raikkonen and Giovinazzi have been able to fight with other cars at the rear of the field.

Raikkonen finished in P18, 0.2 seconds away from Giovinazzi, but was left annoyed after being blocked by Esteban Ocon’s Renault during Q1. The French driver had been summoned before the stewards as a result, with Raikkonen cursing over team radio about his driving. However, the stewards ruled no further action against Ocon.

“The car has been stronger this weekend, I had a good feeling with it and the handling was good, but it’s obvious we are still missing something.” said Raikkonen. “I could have been a bit higher up on the grid but I got held up at the last corner, although in fairness the end result wouldn’t have been too different. We have things to work on as a team, we made an improvement but we need to keep going in this direction. Tomorrow’s race should be interesting: I expect us to be better and we should be fighting for a place in the top ten.”

Giovinazzi who is enjoying a stronger season this year after outqualifying Raikkonen for the third time in four races, said: “We have made a few steps forward so we can be happy about this: there is still a lot of work to do, of course, but we are a bit closer to the others and we are moving in the right direction, which is giving us a lot of motivation. I am very happy with my lap, I feel it was as good as it could have been but it was just not enough for a place in Q2. As in the previous rounds, our race pace looks a bit better so I think we have a chance to battle for some points. We will try to have a good start, put up a good fight and we’ll see what happens.”

Team boss Frederic Vassuer says there’s cause for hope at the team despite their low starting positions: “We are still far from where we want to be, but we are heading in the right direction. We are getting closer to a place in Q2 and we have to take this as motivation to progress further. Antonio’s and Kimi’s laps were as good as they could be, except for some traffic at the end of Kimi’s, and we can look positively at the small gap we had from the top 15. Our task now is to convert these starting positions into points: our race pace has been considerably better than what we have shown on Saturday, so we need to maximise the opportunities it will offer us to claim a place in the top ten.”