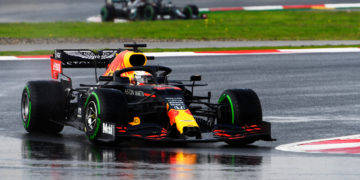 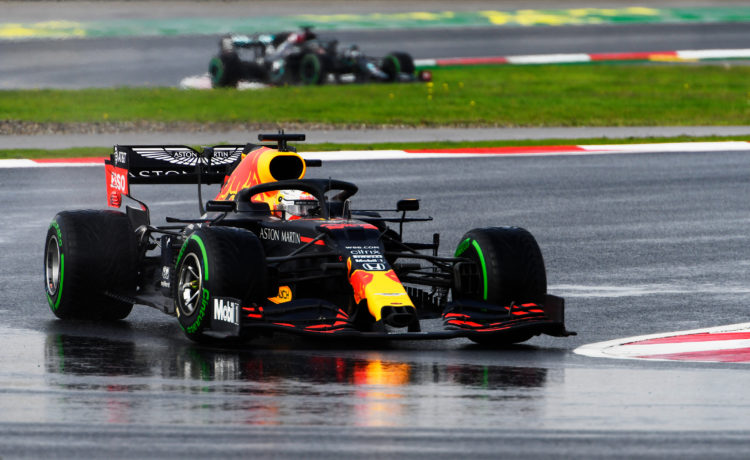 Verstappen finished the race in P6, having had two spins and several off-track moments. Verstappen started from the front row but bogged down off the line and fell down several places. Recovering most of his lost positions in the first stint, Verstappen was amongst the last to switch to the Intermediates from the full Wets.

Utilising his pace, Verstappen was able to get the overcut on Ferrari’s Sebastian Vettel and this released him to start applying the pressure on Sergio Perez for P2 as the Dutch driver was then one of the quickest drivers on the track.

However, Verstappen ended up pinching himself into the kink on the back straight and had to take a more extreme line than optimal – this forced him out wide into the escape area. With grip virtually non-existent on the green paint, Verstappen lost control and spun helplessly down the track – fortunately avoiding hitting anything.

He dived into the pits to change his flat-spotted tyres for fresh ones, but seemed to lose all his spark after that. Another late spin while behind Alex Albon capped off a race in which he struggled to keep the car on track consistently, although he quickly caught up and passed his teammate again.

Speaking to Dutch publication De Telegraaf afterwards, Verstappen admitted it wasn’t his best race ever, but that a front wing adjustment during his second stop had left him with unbalanced aerodynamics.

“Everything went wrong. My front wing turned out to be completely incorrectly adjusted. On one side I had seven degrees too little. That is really a lot.” Verstappen explained.

“Normally you only adjust one degree there, or something in that area. What do you want then, as a driver? Almost nothing works then.”

Red Bull have since confirmed to Formula1.com that a mistake was made with the adjustment, leading Verstappen to run with seven degrees of turn short on one side of the front wing.

Seven degrees is a huge discrepancy in balance, and would have had a significant impact on the handling of the car.

“Today was just a very difficult race to be honest.” said a frustrated Verstappen afterwards. “The start was not great and I dropped back to fourth with the lack of grip on the dirty side of the grid. I got back up to third and tried to follow Checo through the kink but washed out massively which put me onto the green on the exit kerb and I had a big spin. I tried to keep it out of the wall but flat spotted my tyres and needed to pit.”