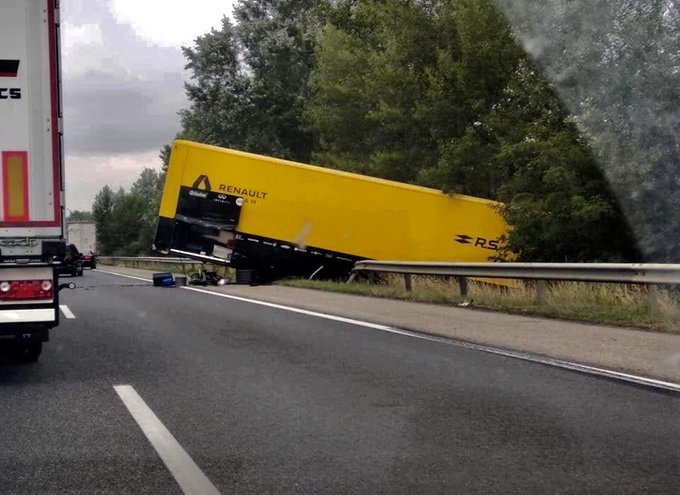 The Renault F1 team have released a statement to the press following a team truck being involved in a road traffic crash en route to Hungary.

Pictures have emerged on social media on Monday morning, apparently showing a Renault F1 team truck at the side of a motorway after being involved in a road traffic incident. The Renault trailer unit appears to be sideways and perpendicular to the road, and detached from the tractor unit itself.

The team have confirmed the incident occurred on Monday morning with the team en route to the Hungaroring in Budapest, having left Hockenheim in Germany yesterday evening following their double retirement.

“We confirm that a Team truck was in an accident on the M1 in Hungary, near Gyor.” said Renault in their statement.

“The driver, who was driving within the respected regulations, is conscious and has not suffered serious injury. He’s been transported to hospital for further checks. No other vehicles were involved.” continued the statement.

Traffic in the area of Gyor is currently heavy as a result of the incident. The team have not given any indication as to the extent of damage to the truck, trailer or team equipment inside but FormulaSpy has requested a statement from Renault regarding this.