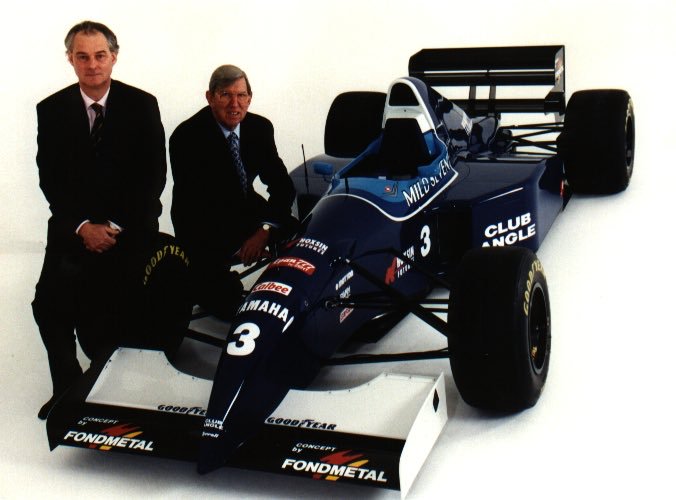 Harvey Postlethwaite was one of the most respected technical directors in F1 at the end of the 1990s, until his tragic death from a heart attack while overseeing a Honda test session.

In terms of F1 car designers, few have managed to become absolute giants of their field. Contemporary men like Adrian Newey & Ross Brawn may be household names at this point but, twenty years ago, Harvey Postlethwaite enjoyed a reputation to rival theirs. Renowned for his abilities to eke out performance from small budget cars, he began a new adventure in late 1998 and early 1999; designing and overseeing a possible return for Honda as a factory team. However, Harvey was to tragically pass away in early 1999 after suffering a heart attack while testing with the new Honda/Dallara chassis.

Postlethwaite’s first notable foray in F1 saw him design the Hesketh chassis that James Hunt piloted to victory in the 1975 Dutch Grand Prix. Proving his skills, his move to Wolf saw the WR1 win at the first time of asking – something that a new team would not achieve again until the Brawn GP team in 2009.

A short foray to Fittipaldi proved unrewarding, but he then ended up at Ferrari in the early 80s. He designed the 1982 & 1983 Ferraris, which both won the Constructor’s titles. He stayed with the Scuderia until 1987 before swapping to Tyrrell. Apart from a two year stint with Sauber, helping the Swiss team prepare for their F1 entry and designing their 1993 car, Postlethwaite spent the best part of a decade at Tyrrell – unfortunately the least successful years of their existence as their resources were no match for bigger manufacturer entries. It was in the mid 90s that Clare Topic became Personal Assistant to Harvey, having worked for him on a temporary basis to help identify dangerous corners in F1. This was done by the FIA Experts Advisory Group in the wake of the tragic deaths of Ayrton Senna & Roland Ratzenberger at the 1994 San Marino GP.

“In 1995 I became Personal Assistant to Dr Postlethwaite.” explains Clare. “In addition to providing Dr Postlethwaite with general secretarial support I also undertook other duties, such as developing the first in-house parts database, recording the engine performance data and I also produced a complete history of Tyrrell Formula One results, which had not actually been kept by the team. I also minuted the monthly management meetings and arranged all in house technical meetings. I assisted Dr Postlethwaite in preparing various speeches and presentations he gave. I supplied some administrative support to the Drawing Office staff.”

Working in close company with Postlethwaite for several years, Clare explains that her job didn’t feel like an ordinary office job, thanks to his presence:

“The young man who was installing software onto my PC suddenly stopped talking. I looked up and saw him staring straight ahead at an imposing figure standing silently in the doorway of the drawing office. The man in the doorway looked directly at me and raised his hands to make a cross with his fingers. I acknowledged this gesture with a quick thumbs up and Dr Harvey Postlethwaite nodded and returned, without comment, to his office. “It’s alright,” I said to the bemused software guy, “I’m not a vampire. He wants a cup of tea.”

“I made him a lot of tea. I took a lot of shorthand and composed a lot of correspondence. We developed spreadsheets, wrote reports, composed speeches and PowerPoint presentations and he had a thing about redesigning the filing system every six months or so. I kept the diary, arranged the meetings and took the minutes. In many ways it should have been an ordinary office job but it wasn’t. It was out of the ordinary because Harvey was such an extraordinary person.”

“It’s true, he could be vague; there was the interesting morning when after reviewing the diary and the post and as I was about to get up to leave, he gave me a slightly sideways look which meant that he was a little embarrassed by what he was about to say:

“Clare, when I was at the Experts Advisory meeting yesterday afternoon, I think I agreed to go to Canada with Sid [Watkins], and I don’t know why. I think it’s for a conference on head injuries. Can you phone Sid and……………………..”

“Find out what it is you have agreed to do?”

“Other times, however, the vagueness was a complete act. After listening to him talk to one member of staff about a subject expertly for about 10 minutes, he completely reverted to vague Harvey when another member of staff from another department asked him about the same thing not 5 minutes later. Catching my amused smile as the second person left, he stared at me with all his intense brilliance shining like lasers from his eyes and said quietly “Clare, I know you know I know, but if they know I know, they’ll want me to do it and I don’t have time.”

“It’s how I most often remember him, working with him in his office. I remember the slight smile that appeared when an idea occurred to him. I remember the stare over the top of the glasses. No two days in that office were ever the same. He was actually incredibly easy to work for as he always knew what he wanted to happen, he was clear in his instructions and, if I had an opinion on the matter, he listened to what I had to say. He could sometimes be infuriating, with his ability to completely disappear. His engineering zeal to test machines to their limits was occasionally directed at the photocopier and the office shredder, leading to much frustration from other members of staff sometimes! Most of the time he was cheerful, funny and very kind. Any kind of bad mood wasn’t tolerated in that office because there was always another race next week to look forward to.”

“I think what made working with Harvey so enjoyable was that he genuinely loved his work. When we worked on documents together, it felt more like a collaboration rather than taking instructions. The work could be difficult, but as he always said, if Formula One were easy, everyone would be doing it. Writing this piece takes me right back to sitting at his desk, working on his computer. I can almost sense him looking over my shoulder reading the screen.”

Postlethwaite left Tyrrell in 1998, when the British American Tobacca company bought out the team in order to create BAR. Harvey joined Honda, who were then eying up entering the sport as a factory team. Having come up with a functional car in association with Honda and Dallara, Postlethwaite was at the Circuit De Catalunya in Barcelona for testing when he suffered a fatal heart attack and died. He is survived by his wife, Cherry, and two children, Ben & Amey.

It’s hard to say what effect Harvey’s death had on the F1 landscape. Honda pulled the plug on their possible works entry as a result, instead choosing to return as an engine supplier before buying out BAR in 2006. Had they instead entered at the turn of the millennium, this would have had a knock-on effect on teams like Jordan & BAR, as well as possibly introducing a whole different team, and drivers, into the mid-field.

While Clare has since moved on to roles outside of F1, she says that her few short years working with the influential designer left an indelible mark on how she approached her work, including setting up her own business:

“The best thing I took away from working with Harvey was that he was not only someone who inspired confidence in himself, but he inspired me with confidence in myself. He was and remains an inspiration.”

You can contact Clare Topic through LinkedIn at https://uk.linkedin.com/in/clare-topic-73b592107