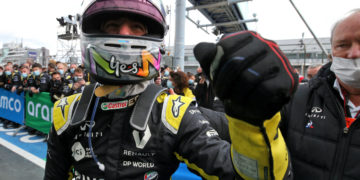 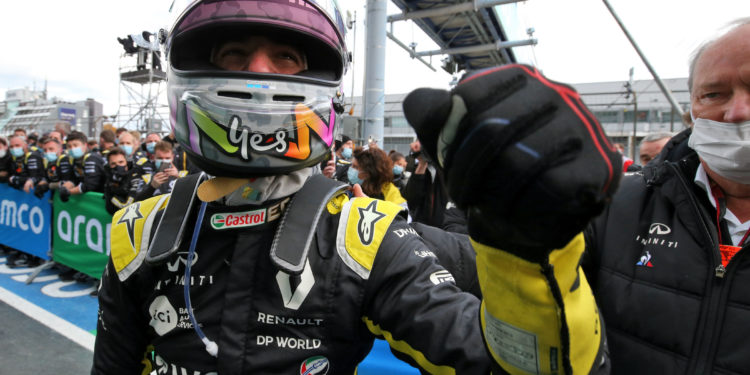 Eifel Grand Prix – Daniel Ricciardo took his debut podium for Renault and his first trip back to the rostrum since victory in Monaco back in 2018.

Ricciardo was absolutely thrilled with his result, laughing with delight over the radio after taking the chequered flag. Ricciardo has finished just off the podium in fourth on three occasions this year, so his claim of “Persistence pays off” on team radio after the race was incredibly apt.

Starting from sixth, Ricciardo got past the Red Bull of Alexander Albon at the start and was in fourth by the time the first pit stops came around. Once the stops were all complete and Bottas had retired from the race, the Australian found himself in third with a healthy gap to Sergio Perez, on fresher tyres, behind him.

When the safety car was called for Lando Norris’ stricken McLaren, Ricciardo took the opportunity to pit and hoped that the new tyres would allow him to retake his podium spot from Perez’ Racing Point. Things were made slightly easier for Renault when Perez took to the pits the following lap putting Ricciardo back in front.

The Australian held the place for the remainder of the race and claimed his first podium in two and a half years. “It’s been a while,” Ricciardo said in the post-race interview. “To be honest it feels like the first podium all over again.

“I think it’s been two and a half years or something and the feeling is really nice, it’s fresh. So happy and obviously to see everyone as well, we’ve all waited a long time for this so I think everyone’s going to soak it up.”

With Ricciardo coming so close the the podium on multiple occasions this year, there has been much talk of a bet between him and his Team Principal, Cyril Abiteboul, where Abiteboul will have to get a tattoo of Ricciardo’s choice if the Australian reached the podium this season.

Speaking of the bet and his ideas for it, Ricciardo said “It’s real, it’s going to happen. We’ll have to do some thinking now but probably something to do with me but I think with a German flavour. This is obviously the place we did it so a little tip of the hat to something traditional in Germany as well.”

He didn't do it on the podium, but Daniel Ricciardo has done a shoey in the comfort of his driver room just for his Insta followers! #F1 #EifelGP pic.twitter.com/HFDZX9TYJq