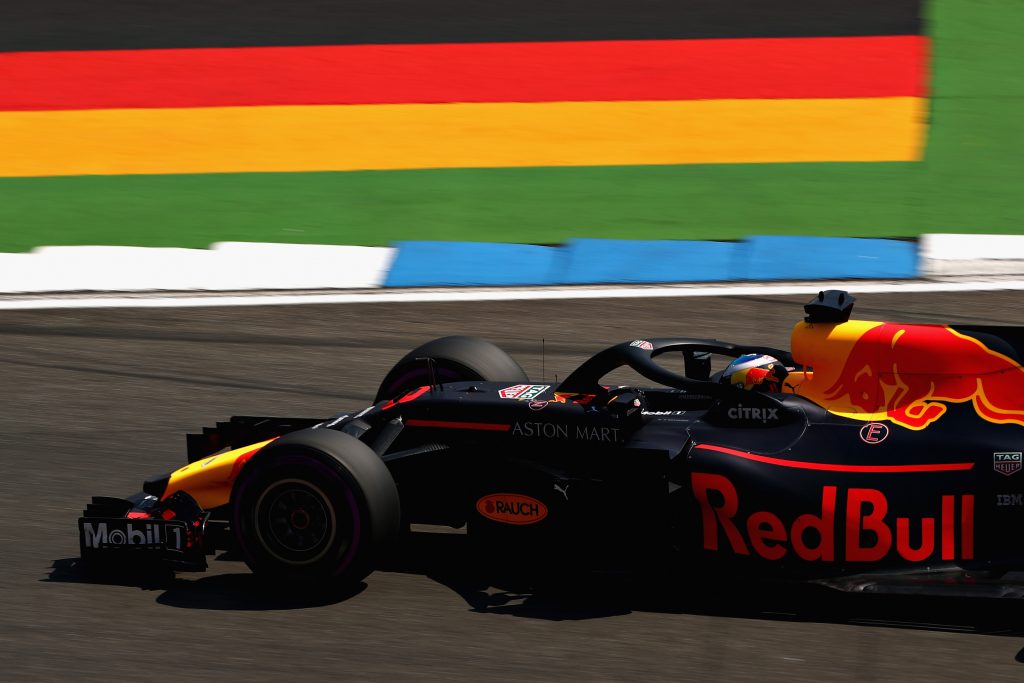 German Grand Prix – Red Bull Racing’s Daniel Ricciardo topped FP1 by 0.004 seconds to Mercedes’ Lewis Hamilton, but is due to start at the back of the grid.

Ricciardo has taken on a new MGU-K, energy store and control electronics, all of which are in excess of his allocated allowance for the season and is due to start at the back of the grid.

Hamilton had the fastest time in the early stages of the session with a 1:14.181 on the soft tyre, 0.286 seconds quicker than Ricciardo who focused on the ultrasoft tyre during the session.

The recently re-signed Valtteri Bottas was the first of the two Mercedes to use the ultrasoft tyre, going fastest on a 1:13.903 to go 0.278 seconds ahead of his team-mate. Max Verstappen then lowered the benchmark to a 1:13.714.

Hamilton retook the lead spot when he put on the ultrasofts with a 1:13.529, with Ricciardo second by 0.17 seconds after his first run. He did two slow laps before going for another hot lap, putting in the fastest final sector to set a 1:13.525.

Sebastian Vettel was third by 0.271 seconds despite not setting a time on the ultrasoft tyre. Both he and his Ferrari team-mate Kimi Raikkonen, who was sixth fastest, focused on the soft tyre during the session.

Romain Grosjean led his Haas team-mate Kevin Magnussen for the ‘best of the rest’ spots in seventh and eighth ahead of Charles Leclerc’s Sauber.

Nico Hulkenberg was 10th, 1.757 seconds off the pace, after surviving an off at Turn 12 when his Renault snapped at the apex, running through the gravel at high speed. His team-mate Carlos Sainz Jr. lost time in the session after suffering a water leak, finished 14th in the session.

McLaren used FP1 as a test session to run new parts, but not ones it intends to use this weekend. For the majority of the session Fernando Alonso and Stoffel Vandoorne ran at the bottom of the timesheets, before Alonso jumped up to 12th in the closing minutes of the session, 2.019 seconds off Ricciardo’s time.