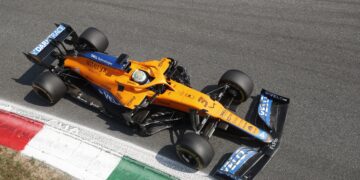 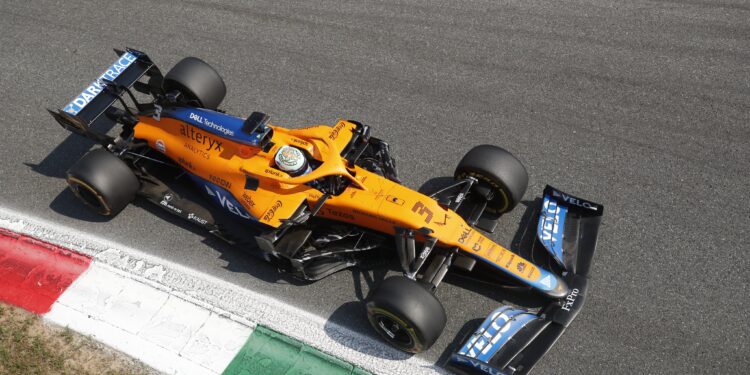 Italian Grand Prix – McLaren’s Daniel Ricciardo has taken his maiden victory for the team, and the British squads’ first since Brazil 2012.

The British team won in style by securing first and second with Lando Norris taking the second step on the podium. Mercedes’ Valtteri Bottas claimed third after third place finished received a five second time penalty for overtaking off track.

The McLaren’s originally looked to be under pressure from both Lewis Hamilton and Max Verstappen and stayed ahead after the pitstops. However, the championship contenders collided and ended their races in the gravel. The McLaren’s remained unchallenged for the race of the race, seeing off a charge from Perez and Bottas behind.

Hamilton managed to get a great start and overtook Norris at Turn 1. On the run down to the second chicane, Hamilton tried a run on Verstappen for second place, but the pair bumped wheels with the Mercedes jumping over the kerbs. Norris managed to nip back through into third place and the stewards deemed the clash as a racing incident.

Antonio Giovinazzi ran deep into the second chicane bouncing over the kerbs, having ran wide, the Italian got clipped from the rear by Ferrari’s Carlos sending him into a spin. The resulting incident brought out the Virtual Safety Car to clear the debris with Giovinazzi pitting for repairs. The Alfa Romeo driver received a five second time penalty for forcing Sainz off the road.

Further back, Sergio Perez tried a move around the outside of Sainz into Curva Grande on Lap 9 and managed to make it stick sending the Mexican up into sixth place.

On Lap 15, Alpine’s Esteban Ocon and Aston Martin’s Sebastian Vettel had a coming together going into the second chicane. Ocon looked to squeeze the Aston Martin wide and the pair banged wheels. Luckily, both drivers were able to keep racing, but the pair were immediately put under investigation. After review, Ocon was deemed at fault and received a five second time penalty.

On Lap 21, Verstappen went deep into Turn 1 bouncing over the kerbs and having to cut the track

Race leader Ricciardo pit on Lap 22 and came out into seventh place behind Sainz. Red Bull thought about pitting Verstappen, but delayed until a lap later. It was disaster for the Dutchman though as an 11 second stop saw the Red Bull driver come out in tenth, behind Alonso.

Meanwhile, Hamilton managed to pass Norris for the de facto lead – Norris came into the pits immediately afterward and came out in eighth place, crucially ahead of Verstappen.

Hamilton pit on Lap 26 for fresh medium tyres and came out in between Norris and Verstappen, however Mercedes and Red Bull collided going side by side into Turn 1 with both of their races ending in the gravel in dramatic fashion. Verstappen’s Red Bull went into the air and came down on top of Hamilton’s Mercedes. Both drivers were ok however the Safety Car was brought out to deal with the carnage.

Ferrari’s Charles Leclerc was able to capitalise on the safety car period and pit coming out in second place and in front of Norris.

The safety car came back in on Lap 30 with Ricciardo extending his advantage. Norris tried a move on Leclerc’s Ferrari into Turn 1 but couldn’t make it stick. However with a better exit, Norris was able to drive on the side of the Frenchman, taking the grass.

Further back, Bottas managed to pass Sainz, and Perez passed Leclerc, however the Mexican appeared to run over the kerbs and take the Ferrari off the circuit. Perez received a five second time penalty for gaining an advantage.

With just 14 laps remaining, the top five were separated by 5 seconds and with Bottas the only one of the medium tyres, the advantage was with the Mercedes driver.

On Lap 44 the virtual safety car was brought out to deal with Nikita Mazepin’s stricken Haas which had pulled over at the side of the road. The VSC was brought back in a lap later and racing resumed.

However, the McLaren’s remained unchallenged with Ricciardo securing his first victory since 2018.

Ferrari’s Leclerc finished in fourth with Perez taking his five-second time penalty and ending up in fifth. Sainz came home in sixth ahead of Aston Martin’s Lance Stroll in seventh.

Fernando Alonso had a quiet race in eighth for Alpine, with George Russell scored points for Williams in ninth. Ocon rounded out the top ten and secured a double points finish for Alpine.

Nicholas Latifi finished in 11th place ahead of four time world champion Sebastian Vettel in the Aston Martin. Giovinazzi and Robert Kubica finished in 13th and 14th in the Alfa Romeos with Mick Schumacher in the Haas the last of the finishers.

Mazepin, Hamilton, and Verstappen were the only retirements with both AlphaTauri cars of Pierre Gasly and Yuki Tsunoda unable to start the race.