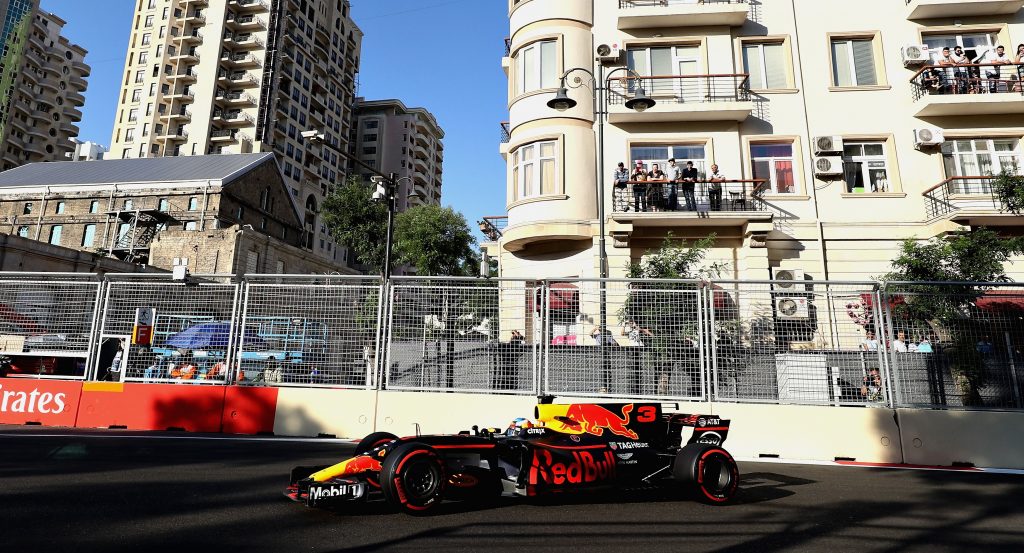 After crashing out in Q3, Ricciardo started tenth but dropped to 17th in the early stages after having to pit on lap 5 to have debris taken out of his brakes ducts to prevent overheating.

But in a race of extreme attrition, Ricciardo worked his way back up onto the podium placings, cementing it with a move on both Williams cars on the final restart.

He then inherited the lead after the two championship contenders Lewis Hamilton and Sebastian Vettel faltered in their own ways.

Hamilton had to pit so his Mercedes team could replace a loose headrest, dropping the Brit down to ninth. He managed to recover to fifth.

Vettel meanwhile received a ten second stop/go penalty for dangerous driving under the safety car. The German swiped into the side of Hamilton moments before the restart after the Mercedes slowed on the exit of Turn 15 and Vettel hit the back of him, leaving him with front wing damage.

Vettel finished fourth ahead of Hamilton, so leaves Azerbaijan extending his championship advantage by two points.

Having took his first points finish last time out in Canada, Stroll took his maiden podium finish in only his eighth Grand Prix. He was just pipped to the line by a tenth of a second by Valtteri Bottas to second on the drag to the line.

Bottas himself was on a recovery drive after making contact with Kimi Raikkonen at Turn 2 on the opening lap that left him with a front-right puncture and in need of a new front wing.

Esteban Ocon was sixth but made contact with team mate Sergio Perez on the exit of Turn 2, giving himself a rear-right puncture and leaving Perez without a front wing and front suspension damage after being pushed into the wall.

This directed more pain in the direction of Raikkonen, as he picked up a puncture running over the debris. The Finn destroyed his floor and rear wing endplate as he brought it back to the pits.

A red flag followed for copious amounts of debris scattered across the track, allowing Perez and Raikkonen to have their cars worked on and rejoin the race.

Kevin Magnussen finished seventh ahead of Carlos Sainz, who spun on the opening lap after team mate Daniil Kvyat ran off at Turn 1 and rejoined in front of the Spaniard.

Max Verstappen retired for the fourth time this season while in a battle for third after a loss in oil pressure.

Felipe Massa retired from a podium position shortly after the red flag period with a broken rear damper.

Both Renaults were out after Palmer had a mechanical failure, and Nico Hulkenberg broke his front-right suspension after hitting the inside barrier at Turn 7.