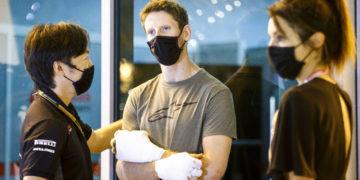 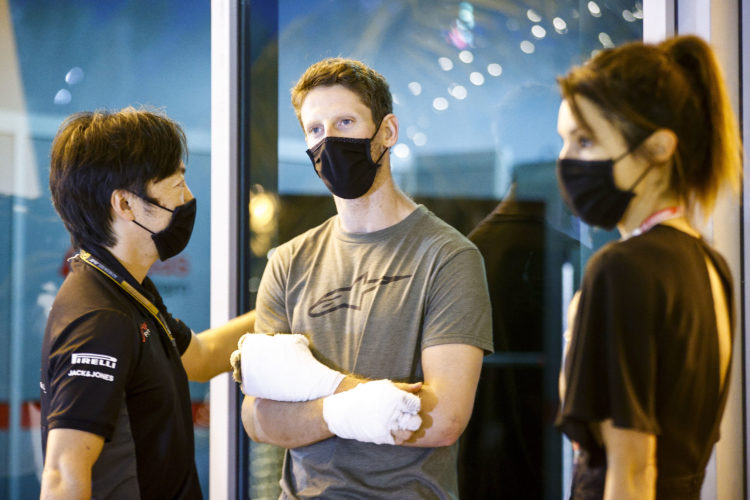 Sakhir Grand Prix – Haas have confirmed that Romain Grosjean will not be racing in Abu Dhabi, as he is returning home to Switzerland to continue his rehabilitation.

Haas have confirmed that Romain Grosjean will leave Bahrain to head home to Switzerland, missing the Abu Dhabi Grand Prix. Grosjean had hoped to be sufficiently recovered from his burn injuries from his crash in Bahrain last week, but he says there is too much risk involved in trying to rush back into an F1 car.

Grosjean, together with wife Marion, will head home to Switzerland and Pietro Fittipaldi is going to take his place in the VF-20 for the season finale.

“It is with great sadness that I will not be able to do my final race in Abu Dhabi and be with the team there,” said Romain Grosjean. “We’ve tried as much as we could with the doctor to recover and to repair my hand, but the risk of racing is too big for my recovery and my health. So, the decision was made that I’m not going to race. It’s one of the hardest decisions of my life, but it’s obviously one of the wisest. I will miss the team, but I will be supporting them as ever.”

Team boss Guenther Steiner says that it’s a huge pity that Grosjean can’t conclude his career with them and Formula 1, but it was the safer choice considering Romain’s current condition.

“I’m naturally very sorry that Romain will miss what was going to be his final race with Haas F1 Team,” Steiner said. “But we are all in agreement that he has to take the best course of action regarding his treatment and recovery from last Sunday’s incident. Romain has shown exceptional bravery and amazing spirit over the last few days – we know how badly he wanted to be able to return to the cockpit of the VF-20 in Abu Dhabi. And we all would have loved him to have been there too.”

Steiner continued, “Romain believed in our Formula 1 project at the very start, he committed to drive for us before we’d even built a car. There is no doubting the determination and sheer effort he has put into helping us to achieve what we have as a young team in Formula 1. We will forever be grateful for that belief and commitment. It is those qualities, his drive and ambition, that I’m sure will aid him on his recovery. On behalf of Gene Haas and myself, together with the whole Haas F1 Team operation, we wish Romain well and a return to full health.”

Grosjean has already said that he plans on asking all the teams to give him a private test in a two year old, once he is recovered from his injuries. He wants to ensure that his last time in an F1 car isn’t a negative memory and, already, Mercedes’ team boss Toto Wolff has told media that they will give Romain a go in one of their cars if another opportunity doesn’t arise.

Update for you ❤#r8g pic.twitter.com/dBLE7ZSzcA