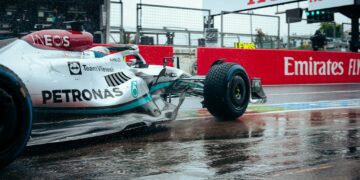 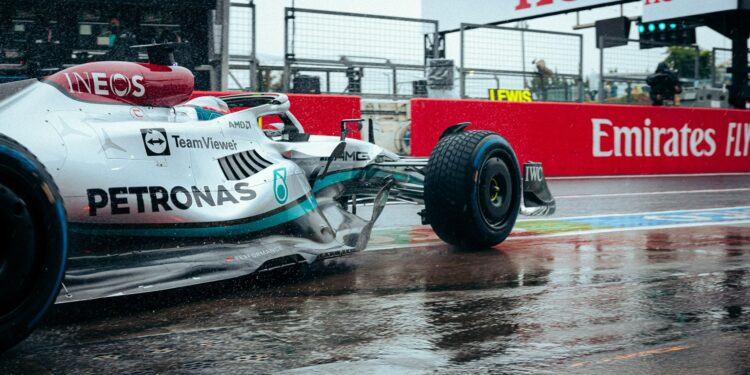 Japanese Grand Prix – George Russell put in the fastest time of the day as the Mercedes were the best in the rain as F1 made it’s return to Japan.

The second practice of the Japanese Grand Prix had been scheduled for an extended 90 minute session to allow for Pirelli to run a test of their 2023 prototype tyres however with a wet circuit the test was postponed but, for some reason, the additional time would stay on the clock.

Mick Schumacher would not be taking part in the session after he aquaplaned into the wall following his practice start at the end of the FP1. Unfortunately for him, his car would require a chassis change but there wasn’t enough time for Haas to complete that and so they would only have the one car, Kevin Magnussen’s, taking part in FP2.

Mick Schumacher found the barrier on his way back to the pits at the end of FP1 😣#JapaneseGP #F1 pic.twitter.com/rvsZWOlCoM

Five minutes into the session, while cameras were following Fernando Alonso and Valtteri Bottas wandering the pit lane in raincoats, Williams’ Nicholas Latifi ventured out on track, reporting back that the majority of the track was in intermediate tyre territory.

The Canadian put the first time on the board, a 1:56.471, while he was joined on track by Carlos Sainz, Daniel Ricciardo and Alex Albon. With the Ferrari driver setting a 1:49.615 during his track time.

The Mercedes cars headed out towards the end of the first half hour of running, Lewis Hamilton on the wets while George Russell had the green-ringed intermediates on. Hamilton shaved a few tenths off Sainz’ time before Russell showed that it was definitely time for the inters, by setting a 1:46.891.

After that the track got much busier and saw Charles Leclerc and the Red Bulls make their first appearance with just over 50 minutes to go. It wasn’t the most ideal of out laps for Leclerc, the Monegasque going into the gravel at T11 but he was able to both avoid hitting the wall and extract his car. Leclerc radioed his team afterwards to say that his front left tyre felt damaged from the get go.

The top of the timesheets was swapping hands between the two Mercedes and Max Verstappen at that stage, but it was Russell once again on top at the 45 minute mark, with a 1:42.968, before the top drivers all headed to the pits for a quick swap to fresh sets of intermediates and were back to setting faster times.

Despite his earlier report of something wrong with his tyres, Leclerc did complete four laps on them but could only set a best of a 1:44.8 before retreating to the pits. The Ferrari driver was joined by all but the Red Bulls just before the 35 minute mark as the circuit went quite quiet for a few minutes.

It was apparently brake issues for the Monegasque and after an extended stay in the pits to try sort it out, he said it still felt bad when he got back on track but that he’d try to make it better.

Despite having 90 minutes to play with, McLaren stuck to their usual 60 minute FP2 run plan and so ended their day when they had completed it with Lando Norris and Daniel Ricciardo in P16 and P17 with a 1:45.8 and a 1:46.0 respectively. With the tyre test being called off so late, and a limited supply of wet weather tyres for the weekend, it seemed like McLaren weren’t the only ones to finish up before the clock had ticked out.

Russell’s remained as the only driver to set a sub-1:42 lap with a 1:41.935 as the best of the day, Hamilton ended FP2 in P2 just over two tenths slower than his teammate’s time and the only other driver to set a time faster than Fernando Alonso’s best in FP1.

The two Red Bulls slotted in over eight tenths behind the Mercedes with Verstappen just quicker than Sergio Perez. A late fast lap by Magnussen saw him move up into the top ten, the Haas driver slotting into P5 just 0.017 ahead of Sainz.

The Alpines and Alfa Romeos all slotted into the last of the top ten spots. Alonso, who had set the pace in FP1, couldn’t match his time from the earlier session and so finished in P7 with a 1:43.533. Valtteri Bottas took P8 ahead of Esteban Ocon while Zhou Guanyu took P10, 2.590 seconds off Russell’s effort.