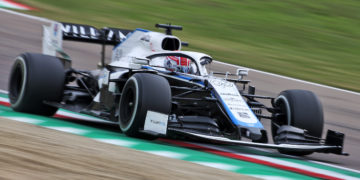 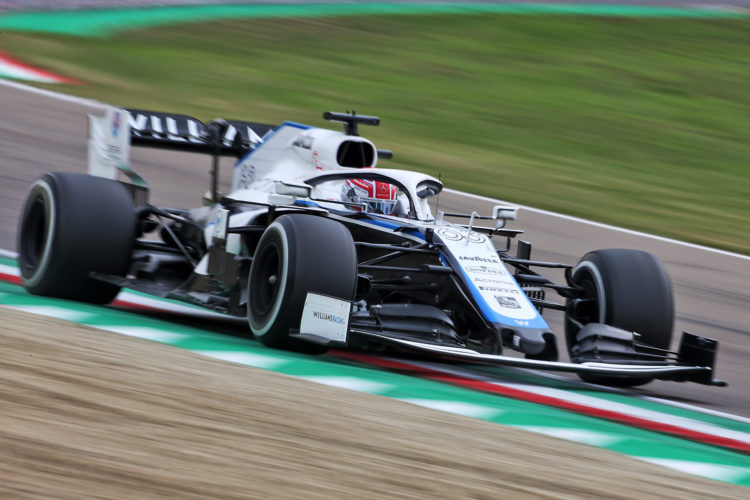 Imola Grand Prix – George Russell was left distraught and held his hands up after crashing out of a potential points finish at Imola.

The Williams driver looked set to score his first points finish in Formula 1 as he circulated in P10 under Safety Car conditions towards the end of the Imola Grand Prix.

Having worked his way up to P10 after pitting on Lap 11 to ditch his Mediums for Hards, Russell was directly behind the Safety Car and ahead of Kimi Raikkonen, who finished P9, when he lost the rear of his car on the downhill section into Acqua Minerali. Going straight into the wall, his front end was significantly damaged and he was out on the spot.

Climbing out of the car, Russell went behind the barriers and waved marshals away from him as he absorbed the disappointment of his mistake.

Speaking to Sky after the race, Russell said:  “I don’t really know what to say. I was working as hard as I could to keep the tyres working.”

“I was pushing the tyres throughout the race. It’s probably the most on the limit I’ve ever been throughout the whole of the race. I think it was really showing and we were in such a good position. Obviously I went over the limit.”

“As soon as I lost the car it was already too late and I was in the wall.” continued Russell. “Really sorry for the team and unacceptable from my side.”

Russell hadn’t pitted under the second Safety Car, similar to several other drivers in the top ten, and said he was caught out by the tyres cooling with the slower pace.

“I was accelerating, I was changing gear at the same time, just with cold tyres. This sometimes happens with cold tyres. It was my job to try and work them as hard as I can to try and keep Kimi and Sebastian behind me who had the new, hot fresh tyres.”

“But no excuses. I’ll go away and learn from this and try to come back stronger next time.”