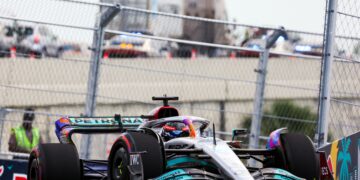 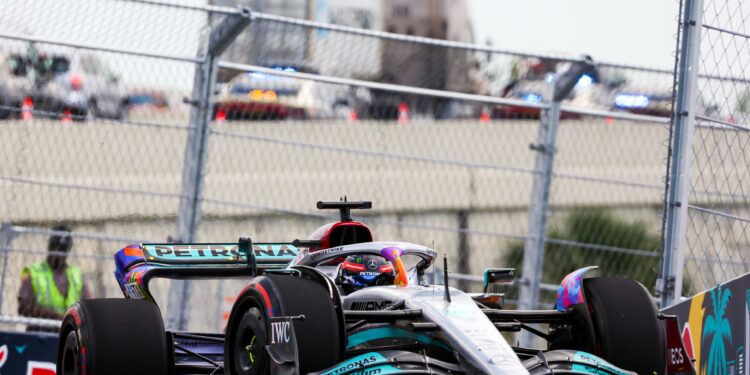 Miami Grand Prix – George Russell put Mercedes back into familiar, pre-2022, territory while it was disaster for Max Verstappen who only managed an out lap.

The second practice kicked off in slightly cooler conditions than the opening session, Max Verstappen sat in the garage for the majority of the session as Red Bull were working on his car after having made a precautionary gearbox change following his brush with the wall in FP1.

Valtteri Bottas didn’t make an on-track appearance as Alfa Romeo didn’t have enough time to repair his car after he hit the wall in the opening session, a crash which brought out the first red flag of the weekend.

After just over ten minutes of track time, Carlos Sainz was sitting at the top of the times with a 1:30.964 on the medium compound, beating the best of the FP1 times, which had been set by his Ferrari teammate, Charles Leclerc.

Unfortunately for the Spanish driver, his session ended a few minutes later as he spun and left his F1-75 looking decidedly worse for wear against the barriers. Sainz didn’t have the smoothest of first practices either, not getting to set a time on the soft tyres after he spun and picked up a puncture.

After twelve minutes under red flag conditions, the session resumed and Verstappen made his first appearance on the circuit but it was not a glorious one. The reigning champion having to deal with steering issues and flaming rear brakes on his out lap, unsurprisingly, he returned to the pits at the end of it.

While that was happening, the Mercedes drivers were putting in some very competitive lap times, Lewis Hamilton briefly topping the charts before Leclerc and then George Russell beat his time. Russell being the first to drop below a ninety second lap with a 1:29.938.

With one red flag in FP1, FP2 delivered two with Nicholas Latifi stopping at the side of the track after radioing his Williams team that the balance felt off and wondering if the tyres were all attached properly. The session resumed with just less than nine minutes left to run and all available cars were out circulating. There weren’t any faster laps set during that time and so it ended with Mercedes, and Russell ahead of Leclerc as the chequered flag was waved to end the session.

Sergio Perez, the only Red Bull to set a time, was P3 with a 1:30.150, while Hamilton was a few hundredths further back in P4. Both Alpines ended in the top ten, Fernando Alonso in P5 was the last driver within half a second of the best Mercedes time, and Esteban Ocon a further five tenths back in P9.

Lando Norris, with his basketball helmet, was P6 for McLaren with a 1:30.535, just ahead of Pierre Gasly’s AlphaTauri. Zhou Guanyu, the only Alfa Romeo to leave the garage, ended in P8, 0.922 seconds off Russell, while Kevin Magnussen rounded out the top ten for Haas. Those ten were all within a second of each other while Sainz’ early fast lap was good enough to leave him P11 by the end of the day’s practice.