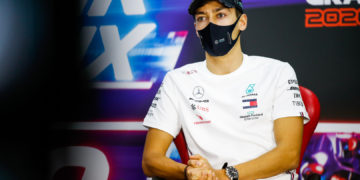 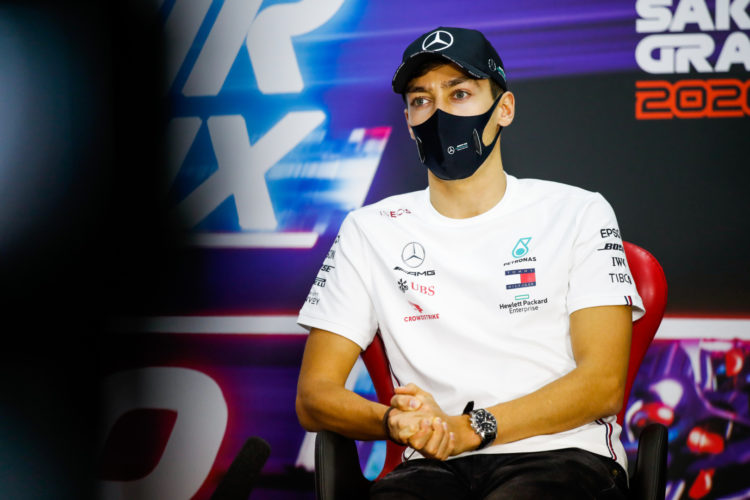 Sakhir Grand Prix – George Russell says he received the call from Toto Wolff to step up to Mercedes while visiting the bathroom in the middle of the night.

Russell has been parachuted in to replace Lewis Hamilton for this weekend’s Sakhir Grand Prix. With the World Champion testing positive for the coronavirus, he is unable to take part this weekend, and Mercedes negotiated with Williams to release Russell to them.

Russell, kitted out in his Mercedes team gear in the paddock on Thursday, looked very much at ease with his sudden promotion to the front of the grid from the slowest car on the grid, and said that he hasn’t set any targets for the race at Sakhir. Nor has he been set any by Mercedes’ Toto Wolff.

“From my side, I think there’s no pressure,” he said in the press conference on Thursday. “I’m being thrown in at the last opportunity, I haven’t driven their simulator in two years, my seat is three years old, I’ve got so much information to learn… and going up against Valtteri isn’t going to be easy. I think I’m in a good position, I’m not putting any additional pressure on myself.”

“I’m going to go out there, I’m going to enjoy it and there’s been no targets, no expectations expected from me by Toto, by Mercedes, because you can’t judge somebody off the back of one race I think. This weekend’s all going to be about learning, especially Friday. Focus towards qualifying and into the race on Sunday, and if I get the opportunity next week again in Abu Dhabi, who knows? That will be easier for me.”

“I was actually in the bathroom at that moment, which was slightly awkward. He answered the phone and said, ‘George, are you in the bathroom?’ and I said, ‘Sorry, I am in the bathroom’. And he said ‘unfortunately Lewis has caught Covid, he’s doing well, he’s healthy and feels fine which is the most important, but we want you to drive’. And then a bit of a sleepless night and we made it happen throughout the following day.”

The call-up resulted in a mad scramble to get Russell fitted out with helmets and custom suits, as well as being fitted for the seat again. The W11, built around relatively short drivers Hamilton and Bottas, proved a tight fit for Russell, who is one of the tallest drivers on the grid. He revealed that he is having to wear smaller shoes in order to ensure proper fitment in the wheel well of the car.

“It definitely was a tight squeeze. My size 11 feet were a struggle, some I’m having to wear a size smaller shoe than would be ideal, so that’s slightly uncomfortable. But I’m sure I can endure the pain to get this opportunity.”

George Russell's funky new helmet for this weekend's race. A bit darker and meaner than his Williams one. #F1 #SakhirGP pic.twitter.com/lC8hd1oOkk