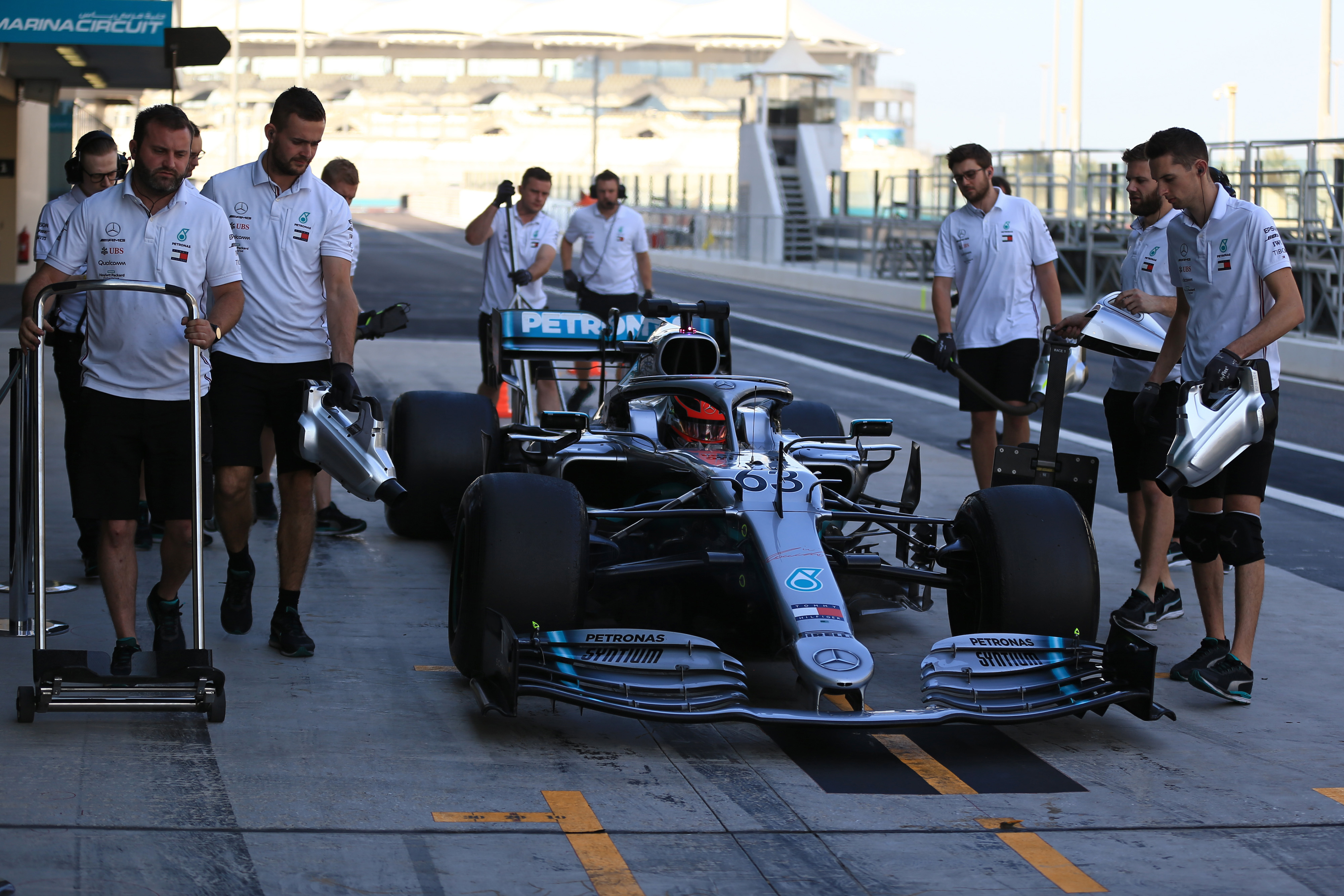 Mercedes will run George Russell in a converted mule car for the final 18 inch tyre test of the year next week in Abu Dhabi.

Following on from the collective Pirelli tyre tests at Yas Marina in Abu Dhabi, Mercedes will stay behind for a few days in order to carry out 18 inch tyre testing on behalf of Pirelli early next week. Merc are one of three teams to have done so in the final months of this year, with Renault and McLaren having already tested early 18 inch prototypes on their mule cars.

Mercedes have confirmed that George Russell, who drove the W10 for the normal 2020 tyre development test on Day 2 this week, will be driving a converted Bottas race chassis for the 18 inch 2021 tyre test next week.

Russell finished his day of 2020 tyre testing with Mercedes as fastest man, clocking a 1:37.204 on the prototype C5 compound. This was just over two tenths clear of the best time Charles Leclerc could manage in his Ferrari, having done his best time on the 2019 C5 compound.

“It’s been a pleasure driving the championship-winning W10 today.” said Russell after completing 145 laps of Yas Marina on Wednesday. “We tested the 2020 tyres and I’ve learned a huge amount about them which I’m sure will help both myself and the team going into next season, which is very positive. It’s been an enjoyable day at the track and I’ll get more track-time in next week when I’ll do the tyre development test for Pirelli before my season finally comes to a close.”

“I’m excited for a few days off to relax a little before I’m back to my training regime to get the best possible preparation for 2020. My first season in Formula One has been a steep learning curve and I’m already looking forward to Australia when we go racing again next year.”

Mercedes’ Andrew Shovlin was pleased with how the day progressed with Russell at the wheel, and explained the plan for next week’s 18 inch tyre test: “It was good to be able to work with George again today and he did a great job to get over 800 kilometres and fastest lap of the day. The car has run faultlessly over the last two days which has allowed us to get through a lot of work. We spent more time today working on getting the most out of the 2020 tyres and we have made good progress in understanding what they need in terms of set-up. We also completed a compound scan in the morning which gives us some data to select the tyres for the opening races and did some work on the softest compound – the C5 – on which George set his fastest lap.”

“That’s not quite it for the W10 as we will be converting Valtteri’s race chassis over the next few days into the mule car to do our first 18-inch tyre development test for Pirelli. George is going to stay here to do the driving for that test, so it’s been very useful to him to get familiar with our car today in preparation for that work which starts on Sunday.”