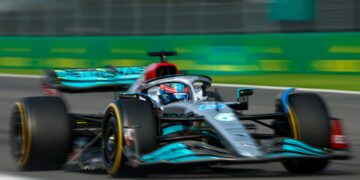 For the third event in a row FP2 will run for 90 minutes to allow for a Pirelli tyre test, while the test was cancelled in Suzuka due to the wet weather the session did run for the full extended time and Mexico was chosen to hold the rescheduled test.

Max Verstappen was the first out at the start of FP2 on the mystery tyres and set a 1:22.464. After sitting out first practice to allow rookies take their cars for a ride, George Russell, Esteban Ocon, Yuki Tsunoda, Kevin Magnussen and Alex Albon would all be allowed to run a regular session with dry tyres for the first half of the practice.

Magnussen, Tsunoda and Ocon’s cars all needed their power units changed after issues for the young drivers in the opening session and while the latter two were out near or at the start of the session, Haas needed longer to work on their car so Magnussen missed the opening half hour.

Magnussen was joined in the pit lane by Lance Stroll and Albon, the Aston Martin driver making his first appearance with 70 minutes on the clock and Albon joined him a few minutes later with red-ringed soft tyres on his Williams.

Fifteen minutes in, Verstappen had brought the time down to 1:21.588, ahead of both Russell and Tsunoda who had set their time on the mediums.

Magnussen made it out to the track just before the first half hour was up but only had a few minutes of running before the Red Flag was brought out as Charles Leclerc had lost the rear going into T7 and smashed the back of his Ferrari into the barriers.

Charles hits the barriers hard at the exit of Turn 7

He's OK and out of the car #MexicoGP #F1 pic.twitter.com/8xs4k7KUvx

At that stage, Russell had moved to the top of the times with a 1:19.970 and was joined at the top of the times by Tsunoda and Ocon, all three setting their times on the softs. The quickest on the test tyres was Lewis Hamilton who had put in a 1:21.509 ahead of the two Red Bulls.

The session resumed with just over 37 minutes to go as the cars queued in the pit lane waiting for the lights to go green again. The clouds had crept over the track and there was a threat of some rain but most predictions were that the session would end in the dry.

In the final ten minutes Ocon radioed his team to say his engine, which had been replaced ahead of the session, sounded strange on partial throttle but his engineers said everything looked okay from their end. The session ended, as FP1 did, with a late Red Flag. This time Alfa Romeo’s Zhou Guanyu being told to stop the car with a hydraulic failure.

The times didn’t change after the resumption so the day ended Russell’s effort as the best of the day, 0.828 seconds faster than Tsunoda while Ocon was nearly four tenths further back. Hamilton ended P4 just less than a tenth quicker than Sergio Perez while Verstappen’s best was 0.009 seconds slower than his teammate.

The Ferrari drivers slotted into P7 and P8, Leclerc a few hundredths ahead of Carlos Sainz. Valtteri Bottas was P9, 2.023 seconds off Russell, but just half a second slower than Hamilton who was the test tyre benchmark, with Pierre Gasly a tenth further back.