Austrian Grand Prix – Williams’ George Russell says that the team’s pace flattered to deceive in FP1, saying he felt they hit the ground running faster than some other teams.

While the gap wasn’t as big as usual in FP1, Russell said he felt that Williams managed to unlock close to their optimal pace earlier than some other teams: “It went as expected really, the FP1 pace was much closer than it should have been really. We had a better time on track than the others did and they probably didn’t optimise it as much as we did but the rest of practice went as expected.”

As a result of the shorter track meaning that the times are closer than other venues, Russell says he’s holding out hope of capitalising on potential errors from other drivers: “Q1 is a bit scrappy sometimes and, with the gaps being smaller here at a shorter track, maybe if someone makes a small mistake we can be there to pounce. But, true pace is as expected and it’s going to be more of the usual.”

Acknowledging the tricky driving conditions in light of the slower lap times compared to the morning session, Russell said the wind played a part in the afternoon: “Compared to FP1, the wind did pick up and there was a big difference. In the middle sector at the two left handers, one had big oversteer and the other massive understeer so it was tricky but that’s racing.”

His teammate Robert Kubica finished P20 in both sessions, almost a second behind Russell in FP1 and 1.3 seconds behind in FP2. Explaining his frustrating day to media afterwards, he said: “Conditions were difficult with FP2 being very windy. Another difficulty and we were a bit affected by various yellow and red flags but it was a difficult session with difficult handling and grip.” 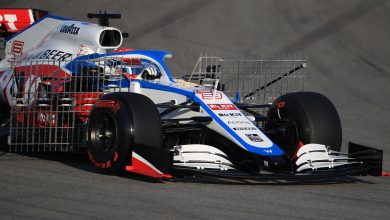