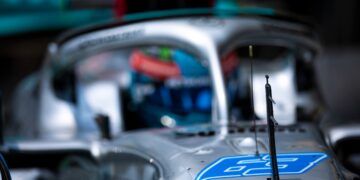 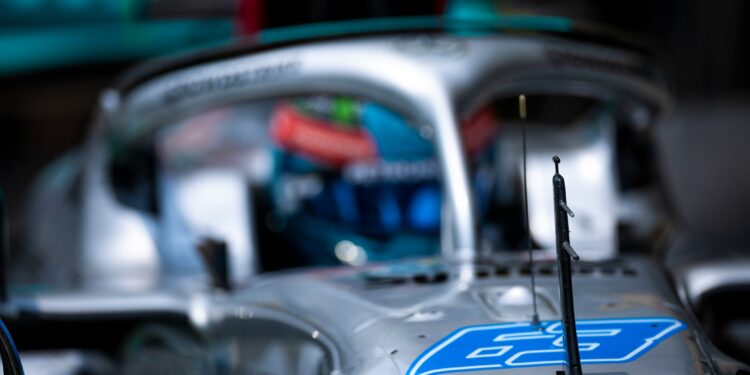 Sao Paulo Grand Prix – George Russell took his debut F1 win, though it only guarantees him P1 for the Grand Prix tomorrow.

After acing his lap in the damp conditions in qualifying, Kevin Magnussen lined up in pole position for both his and Haas’ first time in glorious sunshine at the Autodromo Jose Carlos Pace. The pack was all set up to start as a Haas sandwich with Magnussen at the front while Mick Schumacher brought up the rear.

Eighteen of the twenty cars were lined up on the soft tyre for the 100 km Sprint race to set the grid for tomorrow’s Grand Prix, the oddities in the pack were Max Verstappen P2, and Nicholas Latifi P16 who had instead decided on the yellow-ringed medium tyres.

It was a perfect start for the Danish polesitter, as he held on to his position, while Verstappen had to focus on his rearview mirrors as George Russell looked to see if he could move up from P3. The Haas sandwich was quickly done away with as Schumacher made his way up to P16 over the course of the opening lap.

There was inter-team drama between Fernando Alonso and Esteban Ocon as the two made contact on the opening lap and Alonso ended with front wing damage which meant he had to pit as a result to take an undamaged one.

While Magnussen led the first two laps he wasn’t able to hold Verstappen off forever and the Red Bull took the lead at the start of the third lap. Russell followed through at the end of the lap while Carlos Sainz made a late lunge a few corners later to snatch the final medal position away from the polesitter.

A few laps in there was a message from Race Control that Daniel Ricciardo, Zhou Guanyu and Lewis Hamilton were all potentially going to be investigated for infringing the start procedure. The three would be investigated after the Sprint.

Alpine weren’t the only team with infighting though as Aston Martin saw their drivers fighting over the same piece of track with Lance Stroll shutting the door on Sebastian Vettel causing the German to go onto the grass. While that meant the Canadian held onto P11 at that point, Vettel was the faster of the two and got past without incident a lap later. The Stewards handed Stroll a 10 second penalty for his part in the incident.

Like Lewis Hamilton was at the end of the US Grand Prix, Russell was keeping his team, and race control, updated on Verstappen’s excursions over the track limit lines before he closed up and made multiple attempts on the lead but on lap 15 his patience and persistence paid off and the Mercedes racer was into the lead of the Sprint.

While Hamilton was close behind Sainz looking to get into the top three it was the Ferrari racer who made a move as he dispatched Verstappen to take P2 on lap 19. The two touched as the Spaniard was getting through and the Red Bull’s front wing was looking decidedly second hand as his front wing endplate splintered off and Hamilton was through at the start of lap 20.

There was no catching Russell and he took the chequered flag almost four seconds ahead of Sainz, while Hamilton was right behind the Ferrari. However the Spaniard does have a five place penalty for tomorrow’s Grand Prix after having taken a sixth ICE.

Verstappen and Perez came home in P4 and P5 though Perez was looking to switch positions as he is more in need of points as he is fighting with Charles Leclerc for P2 in the championship.

Leclerc was P6 ahead of Norris while Magnussen did manage to hold on in P8 to take the final point of the Sprint. The top ten was rounded out by Vettel and Gasly, while Alex Albon was the only non-finsher after pulling off the track halfway through.