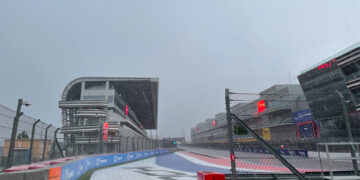 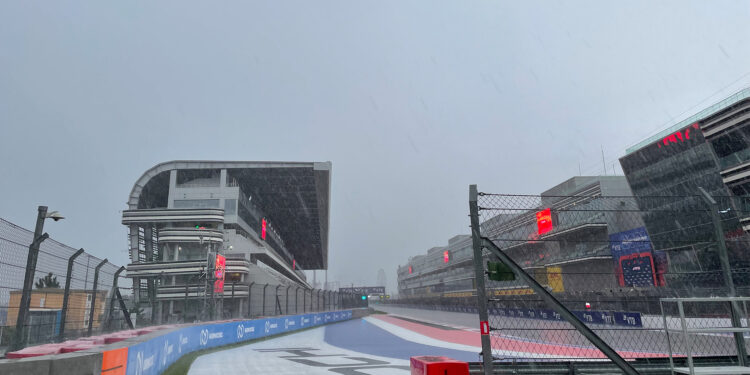 The heavens opened on Friday evening and didn’t stop into Saturday morning flooding the Sochi Autodrom in standing water.

The Formula 2 Sprint Race was postponed due to the amount of standing water and the inability for the medical helicopter to take flight. FP3 for Formula 1 has been cancelled as well.

An FIA statement said: “Having received a request from the Race Director and the Clerk of the Course, in accordance with Article 15.3 a) of the Formula One Sporting Regulations, and Articles 11.9.3.m and 11.9.3.o of the FIA International Sporting Code, DECIDE, in the interest of safety, to modify the Official Programme by cancelling Free Practice Session 3 due to Force Majeure.”

The current weather forecast suggests that the rain could ease up later in the afternoon with the FIA going ahead with qualifying at the scheduled time of 13:00 UK time.

Race Director Michael Masi explained that the priority is to get qualifying run on Saturday afternoon, however there are contingency plans in place, such as running qualifying on Sunday morning should the rain not subside.

“Effectively, the procedure for today will be that we will aim to start all sessions, get everything ready from an operational perspective, and then judge the conditions at the time,” said Masi

“What we’ve seen from the forecast side is that we will have this level of rain until about 13:30 to 14:00 local time, then decreasing in the afternoon.

“The priority from today’s perspective is obviously Formula 1 qualifying this afternoon. Formula 1 will take priority.

“We were fortunate enough in restructuring the programme to have the first Formula 3 race yesterday, pre-empting the weather that was going to happen this morning, which based on what we saw when we came out to the circuit this morning was absolutely the right decision. It was torrential at the time we would have been having the F3 race.

“The determining factor this afternoon will be the light,” he continued.  “Sunset locally is about 18:15 in the evening, but with weather conditions like this, obviously light diminishes far earlier. That will ultimately be our cut-off point.

“If qualifying isn’t able to happen today, as we’ve seen a few times in the past, then we will hold qualifying on Sunday morning.”