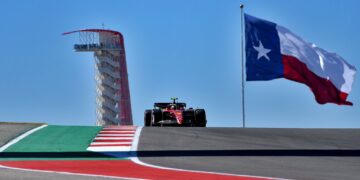 Sainz ahead of Verstappen in US FP1

Sainz ahead of Verstappen in US FP1 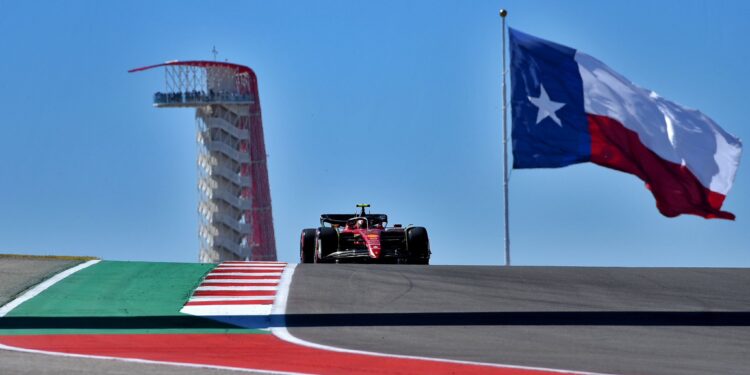 United States Grand Prix – Carlos Sainz beat Max Verstappen to the top of the timesheets in the first practice at the Circuit of the Americas.

Five of the grid will be sitting out this FP1 sessions – Daniel Ricciardo, Charles Leclerc, Valtteri Bottas, Nicholas Latifi, and Kevin Magnussen – the first four of those displaced to allow young drivers take their seats – Alex Palou, Robert Shwartzman, Theo Pourchaire, Logan Sergeant – respectively, while Antonio Giovinazzi is in at Haas for Magnussen.

Lance Stroll was the first to take to the track, his teammate right behind him, and the Canadian opened the times with a 1:46.292 . The session saw its first Yellow and then Red Flags within the opening ten minutes when Giovinazzi lost the car and went into the barriers at T6. Haas later revealed the clutch had overheated and the car would need a new gearbox before FP2.

The Italian did manage to extract his Haas and return to the pits but the Reds had already been flown so the track went silent for a few minutes. The session got back underway with just over 48 minutes on the clock and at that point Sergio Perez’ 1:40.549 was leading the way on the soft tyres while Lando Norris on the mediums was just over a tenth behind.

Shwartzman lost some track time during the first half of the session while Ferrari adjusted padding around his seat, the Russian-Israeli driver not finding the cockpit the comfiest of places on his opening few laps.

Halfway through the session Max Verstappen had set the best time, a 1:37.462 on the softs while Carlos Sainz was the closest but still over eight tenths further back on the same compound. Palou was the best of the rookies at that stage, sitting in P12, with Shwartzman six tenths slower in P14.

The Red Bull driver’s time was closed in on in the following ten minutes with Lewis Hamilton, Fernando Alonso, Sebastian Vettel and Esteban Ocon all slotting in between the Dutch driver and Sainz, Hamilton getting closest just 0.183 off. Just inside the final twenty minutes though it was Stroll who managed to demote the newly-crowned champion. The Aston Martin racer managed a 1:37.460, to shave 0.002 seconds off Verstappen’s time.

With fifteen minutes to go Sainz had taken control at the top of the times, the Ferrari driver was the first into the 1:36s with a 1:36.857. The Spaniard’s time stood until the end, Verstappen only getting to within 0.224 seconds with his final flyer.

Hamilton slotted into P3 while Stroll ended P4 with his earlier chart topping time. Perez was 0.658 seconds off in P5 with Alonso a couple of tenths further back.

P7 was George Russell, who finished just ahead of Pierre Gasly and Norris. The final spot in the top ten went to Sebastian Vettel, the first just outside of a second of Sainz’ time with a 1:38.041.

The FP1 only drivers finished in the final five spots on the time charts, Giovinazzi’s session ended with his crash near the start, and it was Shwartzman who was the best of the rookies with a 1:38.951. The Ferrari Academy driver was on another good lap at the end but was blocked by Verstappen and so didn’t improve.

Palou took P17 in the McLaren, just less than a second off Shwartzman’s effort while Alfa Romeo’s Pourchaire set a 1:40.175 with Sargeant, the first American to take part in an F1 session since 2015, was a few tenths slower in the Williams.