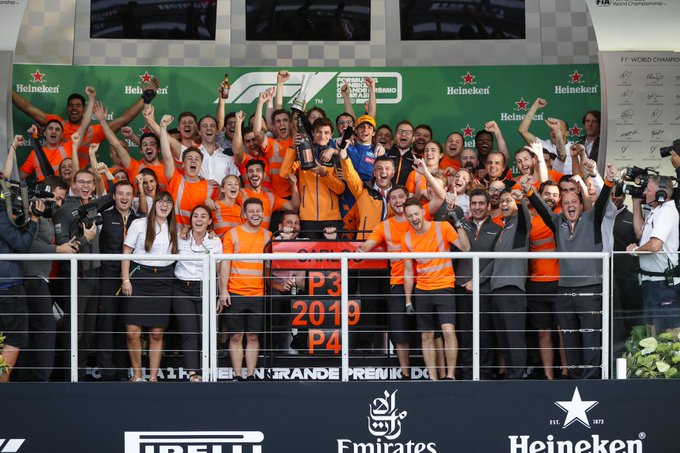 Brazilian Grand Prix – Having held an inpromptu podium ceremony with his McLaren team after his post-race promotion, Carlos Sainz hails a ‘special’ day.

While Carlos Sainz finished fourth on the road at the chequered flag in Brazil on Sunday, the Spanish driver was promoted to P3 hours after the race when Mercedes’ Lewis Hamilton was given a post-race five second time penalty.

This came about after the official podium ceremony, meaning that Sainz hadn’t been able to take to the rostrum to enjoy his first experience up there. As a result, the McLaren team hauled Sainz up onto the podium where they held their own ceremony complete with the third place trophy.

“Yes! What a day!” beamed Sainz afterwards. He had himself been under investigation for use of the DRS under yellow flags, meaning it was a tense wait to find out whether he too would face a time penalty. Official word eventually filtered through, and Sainz was hoisted up onto the shoulders of his team members as they paraded him through the paddock

“It’s a weird first podium not being there straight after the race, but I’m extremely happy with our race today.” continued Sainz. To finish P3 coming all the way from the back of the grid was a big challenge, but we fought until the end with everything we had! It was a very eventful race and I think I was the only car to do a one-stop strategy. It was really difficult to hold the other midfield cars behind after the two Safety Car re-starts, but I managed to defend my position well and took advantage of what happened at the front of the race.”

Sainz made his one and only pitstop on Lap 29, swapping from the Softs to the Mediums after starting from last place. He had encountered a power unit issue in Q1 which prevented him from qualifying. This made his podium finish all the more remarkable: “A good first stint, a great pit-stop from the guys and a very challenging and long stint to bring it home and finish P3 for the first time in my career. Congrats to the whole team, here and back in Woking! My first podium is obviously very special but we need to keep pushing to step up there on pure pace! That’s what we’re really here for, that has to be our goal!”