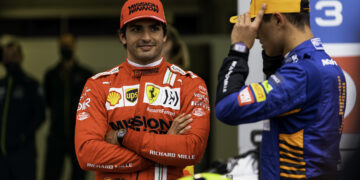 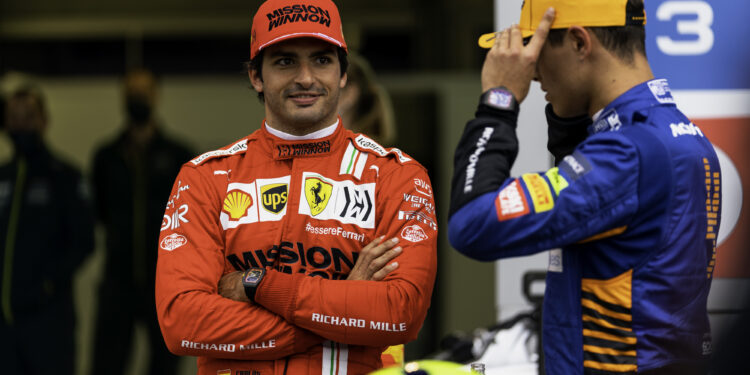 Russian Grand Prix – Carlos Sainz says he will be giving it everything at the start of tomorrow’s race despite the dirty side disadvantage.

It might be his best qualifying performance to date but Sainz is slightly rueing what could have been after being knocked from provisional pole by his old teammate at McLaren, Lando Norris.

“Well, it’s a good result, definitely,” Sainz said. “I was so close to pole position that maybe the second place doesn’t taste as good as it should – but I think it was a well-executed session and a good lap there at the end.”

With the conditions changing throughout the qualifying sessions as Sochi dried up from the heavy overnight and morning rain, the Ferrari driver admitted the team is still struggling to find pace on the intermediate tyre with Sainz just scraping through to Q3.

“Yeah, very tricky. It was right, from the beginning, a very tricky qualifying but right after Q2 I could see that there was a chance that the slick was going to come into play. This weekend we’re looking a bit stronger, probably our weakest conditions has been on the inter.

“It was very good fun to be honest, especially on the slicks, on the inter I wasn’t enjoying myself a lot. Still the feeling with the inter we need to see what’s going on with that tyre because it’s been now two quali sessions where we were not very competitive. We did a very good strategy, pitting there two laps to the end, getting the slick up to temperature and then pulled out a pretty strong lap.

“I managed to put a very good lap at the time and actually not many people coming behind managed to improve on me, only my good friend Lando, did obviously a very good job. For being one of the first ones across the line it was a properly on the limit good lap.”

Looking to the start of tomorrow’s race, Sainz says that even though it is his “good friend Lando” on pole, he’ll be giving no quarter and will be doing his best to pass the McLaren on the run to the first braking zone.

“If I can get Lando at the start or if not, just get a good tow because starting P2 here, the dirty side is really penalising, so I’m going to need to make sure I do my homework overnight to make sure we don’t lose too much off the line on that dirty side and see if I can get into a tow or why not pass him into [Turn 2].

“Now if you really are a bit more rational,” added Sainz. “You see I’m surrounded by Mercedes engines, long run into Turn 2, I’m starting on the dirty side, there’s many factors you know going against me but I’m going to try and get a good start and if not get into a good tow and see if someone can draft me into Turn 2 because I know it’s going to be a long one. I’m going to brake late, that’s for sure.”