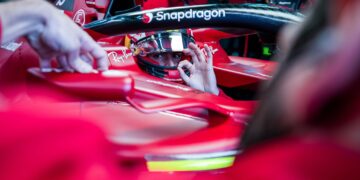 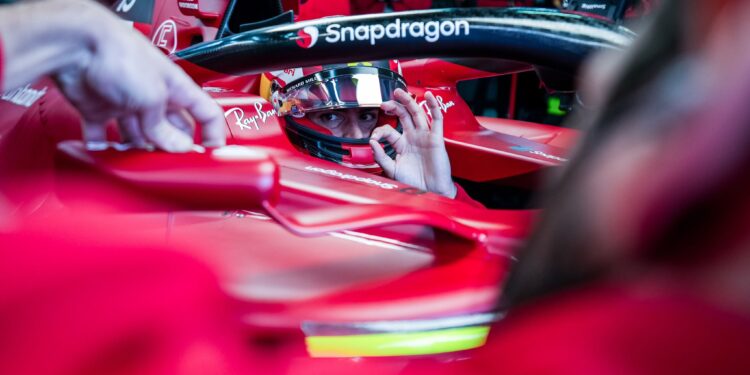 Emilia Romagna Grand Prix – Carlos Sainz scythed through the field during the Sprint to put himself into contention for the Grand Prix.

After a mistake on Friday left him at the back of the top ten, Sainz made the most of the Sprint to get himself back to the front to make it all even with two Ferraris in the fight with the two Red Bulls for the Grand Prix.

After setting a banker time in Q2, the Spaniard spun into the gravel and crunched his Ferrari into the barriers. That was the end of his participation in qualifying but the time he had set before that saw him progress to Q3 and without him able to set a time, he lined up in P10 for the Sprint.

Sainz started the race by overtaking two cars moments after the lights went out and steadily continued to catch and overtake throughout the course of the twenty-one laps.

“Definitely the maximum that we could’ve got out [of the Sprint],” Sainz said afterwards. “Fairly happy with the comeback, I think we did everything we could at the start and made a lap by lap overtake. It was a solid race, unfortunately I made my life very difficult yesterday but the important thing is that we’re in the fight and we are ready to battle tomorrow.

“I’m in the fight, quick, I need to analyse the race pace and see how my pace was compared to the leaders and if not, then let’s make sure that we keep finding lap time because the Red Bulls look very quick and maybe we might need to find something for tomorrow.”

Top form from the Smooth Operator! 💯@Carlossainz55 went from P10 all the way to P4 in the Sprint with some masterful moves and overtakes 🤯#ImolaGP #F1 @ScuderiaFerrari pic.twitter.com/Nn2a9pDGVx

The Ferrari driver told Sky Sport F1 that aside from rectifying his mistake in qualifying, the Sprint was important for the team as it showed them that they have some work to do overnight as the Ferraris had to deal with tyres graining while their closest rivals didn’t.

“It was important also to have twenty solid laps to feel the car in the dirty air, feel it with the degradation that we had today. That was quite high, you could see with Charles we were struggling with the front graining more than the Red Bulls, so it was a very good race simulation of what could happen tomorrow in the first stint and this should give us a better understanding going into tomorrow.”

Despite a successful Saturday, Sainz says he still has some way to go before he is fully comfortable with the F1-75. He’s having to change the way he drives and mistakes will naturally happen when you do that, but once he gets everything together, then there’ll be no stopping him.

“It’s not comfortable yet,” he said to Sky F1. “I’m still not as smooth as I would like to be. Mistakes like yesterday prove that maybe I’m still not 100% happy with the car and understanding it fully but I’m hustling out there, I’m trying my best to get it up to my liking, to change my driving and mistakes are going to come when you’re challenging yourself like that.

“There’s no magic weapons, you have to do something from your side as the driver and I’m having to do techniques and driving that I’m not used to doing in order to be fast with this car. At the same time I need some testing and I need some free practices to try things to bring it a bit more to my liking. As soon as I find the balance that I like and in combination with my driving, then I can be as fast as anyone out there.”