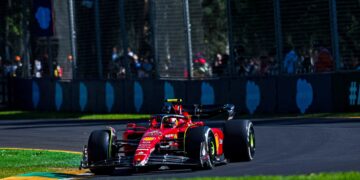 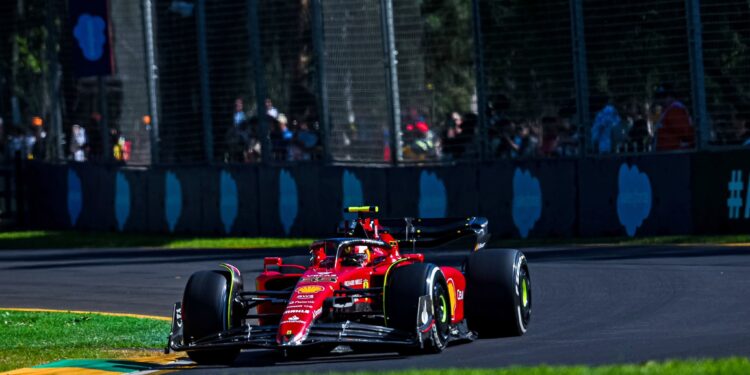 Australian Grand Prix – It was Ferrari on top in FP1 as Carlos Sainz and Charles Leclerc outpaced the Red Bulls in the weekend’s opening session.

As the light went green for an Australian Grand Prix session for the first time since 2019, it was Red Bull Racing’s Sergio Perez, with huge aero rakes on his side pods, who was the first out onto the newly updated and resurfaced Albert Park circuit.

Lando Norris was the first to the top of the leaderboard with a 1:25.009 on his medium-shod McLaren but that time was quickly shaved down and with fifteen minutes of the session done, it was the reigning world champion, Max Verstappen, who was top of the charts with a 1:21.625 on the soft tyre, while Norris had slotted into P2, two tenths off the Red Bull’s time.

There was a bit of early drama in the pit lane with Ferrari being unable to get a front wing with additional ride height sensors to fit onto Sainz’ car so he was delayed getting to track while they tried to deal with that before switching to an older version.

The stewards were called into action within the first ten minutes as Lance Stroll was unimpressed with Lewis Hamilton, feeling that the Mercedes had impeded him. There was no further action for that, or for an incident involving Verstappen and Williams’ Nicholas Latifi. Some later impeding incidents between Zhou Guanyu and Sainz, and Stroll and Kevin Magnussen were held for post-session judgement.

With just less than forty minutes on the clock the red flag was thrown to allow marshals to safely recover a big piece of bodywork which had fallen off Perez’ car right onto the racing line after the final corner. It only lasted a couple of minutes and then the track was back to green.

In the second half of the session, Verstappen’s hold on the top spot of the timesheets was challenged first by Charles Leclerc, and then Sainz who first had a 1:20.3 before becoming the first car under eighty seconds with a 1:19.806.

The red flag made a reappearance with just less than fifteen minutes on the clock as Sebastian Vettel, starting his 2022 season at the more traditional location after covid saw him miss the opening two rounds, stopped his Aston Martin on track after the engine died and started smoking. The car was cleared and the session resumed with ten minutes left of the practice.

There were no changes at the top of the times in the final few minutes so it was Sainz and Leclerc who outpaced Perez and Verstappen for the first session back in Albert Park. Early pacesetter, Norris, ended P5 just over a second behind Sainz as McLaren look to get their season started properly after a less than ideal first couple of rounds.

Esteban Ocon put his Alpine, now racing with their blue colour scheme after having a fully BWT pink version in the first races, into P6 with a 1:21.004. Lewis Hamilton was the faster of the Mercedes drivers in P7, 1.221 seconds off P1 while the second McLaren with the home-favourite Daniel Ricciardo in P8.

The top ten was rounded out by Fernando Alonso with a 1:21.229 in P9, the Alpine driver having to use a new engine after his last one failed during the Saudi Arabian Grand Prix, and Valtteri Bottas a couple of hundredths slower in P10.

Haas’ Kevin Magnussen wasn’t feeling overly well and had missed the press conferences earlier in the day but did manage to complete the session and finished P18, ahead of both Latifi and his teammate Mick Schumacher.

After the session ended the fans were treated to a lap of honour as Vettel borrowed a scooter and waved to the crowd as he returned to the pit lane. The fans might have enjoyed it but the stewards weren’t as impressed with the German coming under investigation for entering the track without permission.

This is the most iconic end to a practice session we can remember 😅#AusGP #F1 pic.twitter.com/4jPlAZotzd